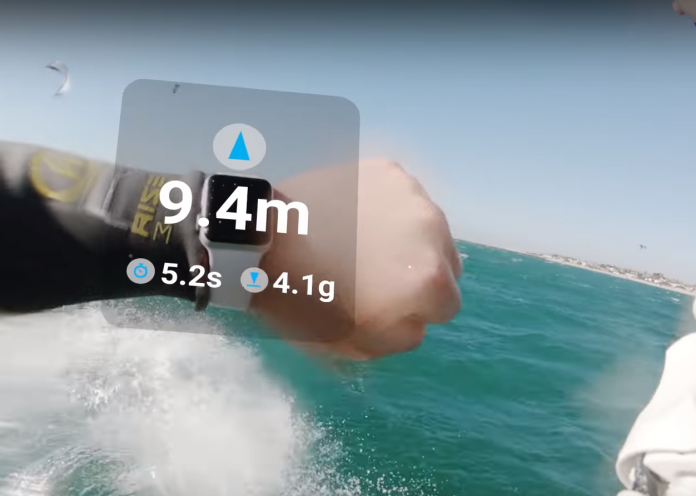 [update July 2022] The blog below has been written in 2018. Meanwhile we know more about the accuracy from WOO and the Surfr app. We even agreed with WOO to write a fresh up to date blog about it.

Accuracy depends on a few things. One of them is on what hardware (accelometer and gyroscope) is used. Which is a big diversity withing phones (and thus for the Surfr App) A major topic for our independent test in July 2022.

We know people sometimes struggle with the life time of the battery inside the WOO. Or corroded pins. Those problems are hard to overcome. We know the support from WOO is back up to a very acceptable level. So our advice is to contact WOO when those issues are popping up.

The WOO 3.0 is here now for a little while and it’s most likely to change the game. Although we are not quite sure if that is in a positive way.  Since 2015, when WOO introduced its device to record your kite sessions -including jump height- the sport got an interesting addition to it. Although it is a fun sport, some sort of competition was added to it; Who can jump -world wide- the highest?

Recently WOO offered a rather affordable way to buy the 3rd generation.  The business model has little other ways to get money in, so it seems a smart way to collect some fresh coins. It does have added value like a better battery, better mount and an instant smart watch read out possibility. But there seems to be a big catch in this WOO 3.0 and in the end it may have ruined its own game. Or should we all get rid of our previous version and buy the 3.0?

Soon after the launch of the WOO 3.0’s the big question does it record higher jumps compared to the previous versions?  popped up on several forums. The answer is partly true but also more complex than only that. We took a bunch of different versions on one board and made some statistical comparing on the data.  After looking into it deeper and deeper we think the level playing field between different WOO generations has gone.

We see unexplained differences and structural variations between the  newest WOO and the previous versions. The WOO 3.0 can give much higher maximum jump heights. How is that possible? We tried to contact WOO -without succes- so for the moment we can only guess. Below you can read what efforts we did to properly compare them and our conclusions is quite bitter. But to stay on top of the game you better switch to the 3.0 version.

The good news is that the 3.0 versus 3.0  version seems to be a fair game. But the differences between the WOO versions possibly qualifies the WOO 3.0 to be a -sarcastically ment- ‘true game changer’. 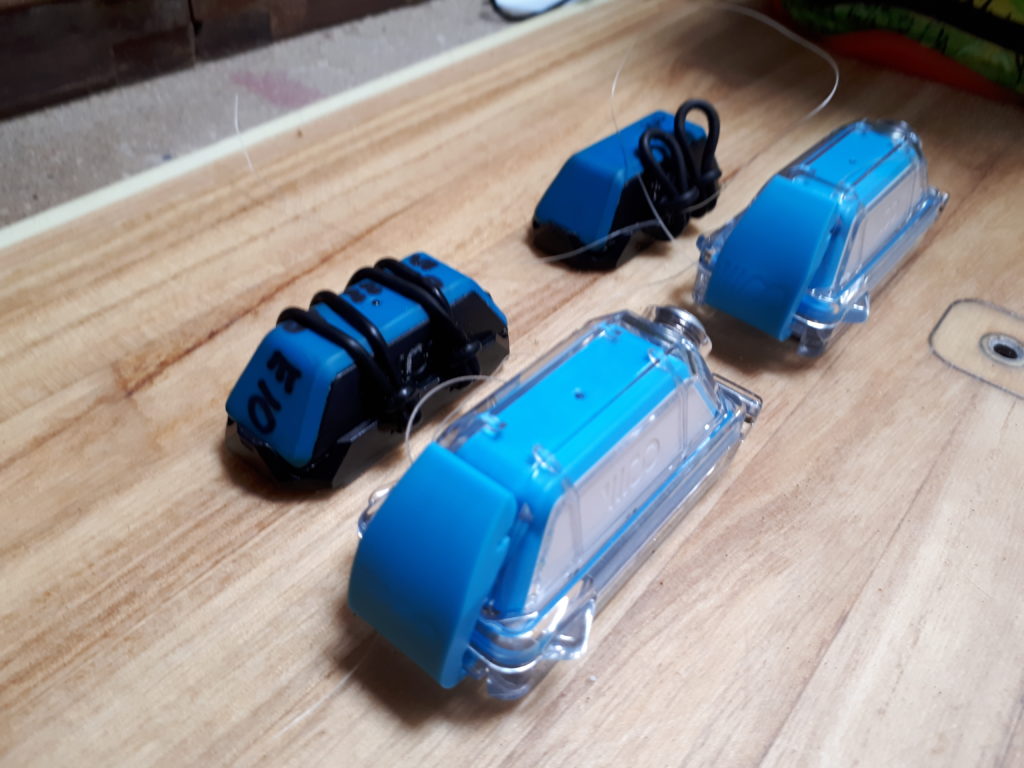 This test isn’t about the accuracy it self. So we didn’t investigate if 10m readings are really 10m. This test is neither on the added value of the latest version of the WOO (better battery, connection to a smart watch or the waterproof mount). The test is about a level playing field. Is each Woo version – to some degree- comparable?

Comparing WOO’s properly isn’t easy. For example WOO is updating it’s firmware from time to time (for the WOO 3.0 for example already has had 3 versions). Do those versions influence the data? We cannot be 100% sure. Since the 1.0 vs 1.0 in this test (with different software versions) 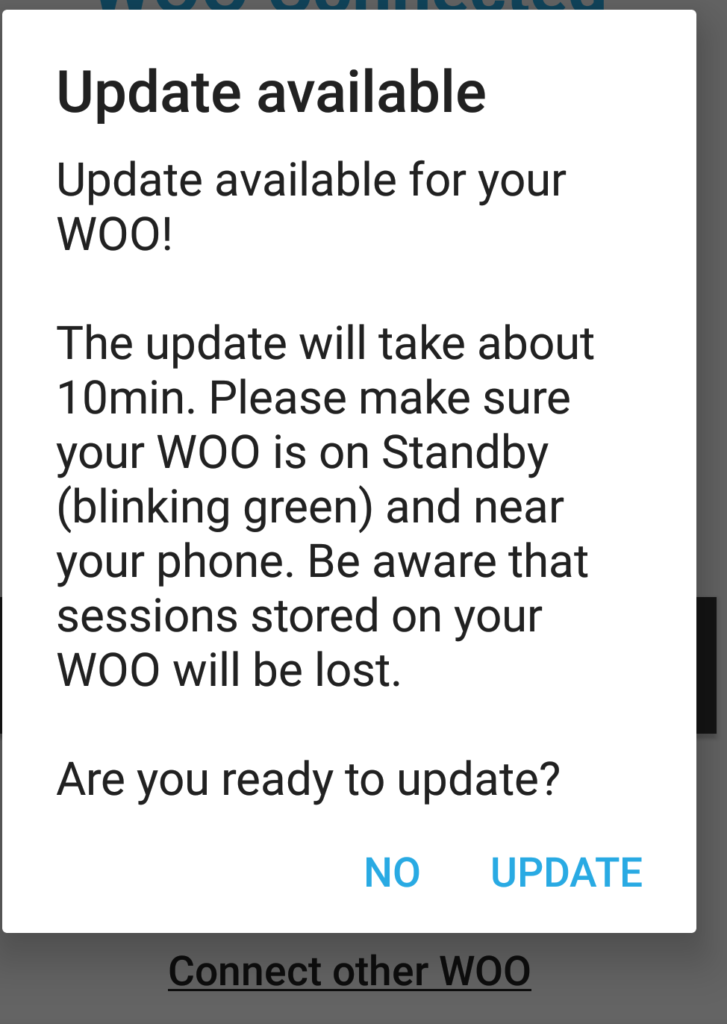 is a lot more different compared to our previous tests, it suggests different software versions play an important role. Another problem is the time recordings; the difference in readings of the same jumps (gradually) deviate easily 10-15 seconds in one hour.  Which is much more as we would expect from a measuring device and makes comparing jumps for this test more difficult.

It is not difficult to see there is something strange with our data. The difference in the maximum jump height in our test is up to an immense 4.4m (the 1.0 version is 30% lower compared to the Woo 3.0). Is this an incident or are there structural differences? 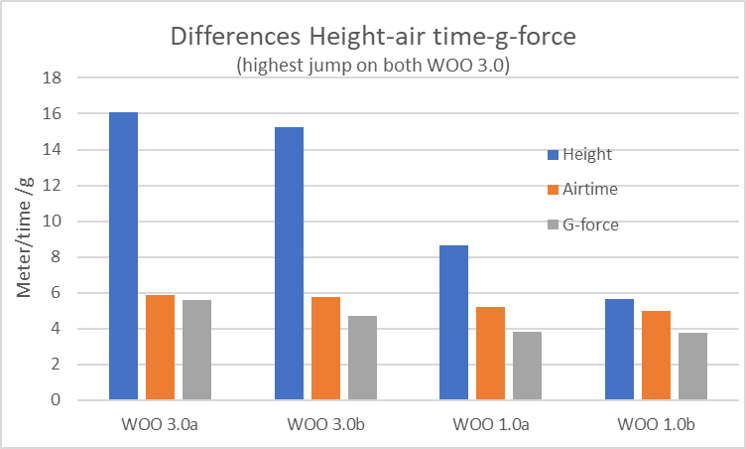 This specific, highest jump on both 3.0 WOO’s (at about 20 minutes kiting) had 16.1 and 15.3m, where the Woo’s 1.0 only had 8.6 and 5.7m. An even worse difference compared to the complete session results (where the WOO’s 1,0 found up to 12.3m on a completely other jump). Obviously the Woo 1.0 ‘s have had totally different moments for the highest jump, where the 3.0’s had quite similar readings. The WOO game starts to sound a bit like a lottery!

To see whether this mis-match was an occasional incident or an structural deviation we made several X-Y comparisons. In those X-Y graphs, for those who don’t know them, the R-squared should be close to 1.0. Low R-squared indicates there is no link between the two readings (of the different WOO’s). The “a”  in Y=aX tells you what the structural difference is between X and Y, where 1.0 means they are similar.

The 3.0 to 3.0 data looks decent. With an 0.8 R-squared and a slope of 0.98. This means pretty much a level playing field between WOO 3.0 users. But mind you that a more deeper statistical analysing shows an easy chance of having a couple of meters differences on 2 similar 3.0 WOO’s on the same board, on the same jumps in the top league competition -let’s say above  20m (the 99 % CI is about 10%)-. 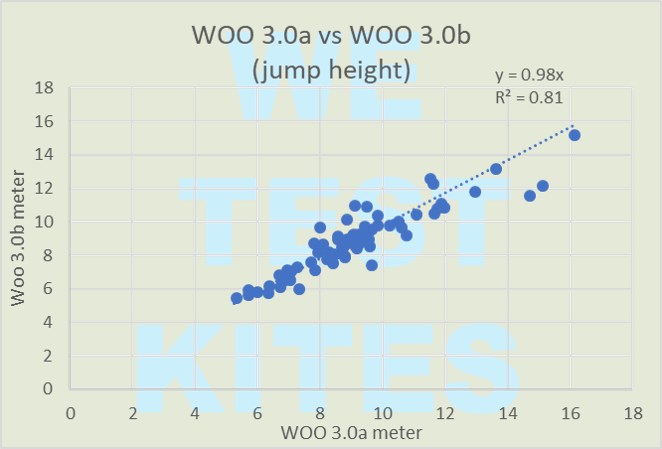 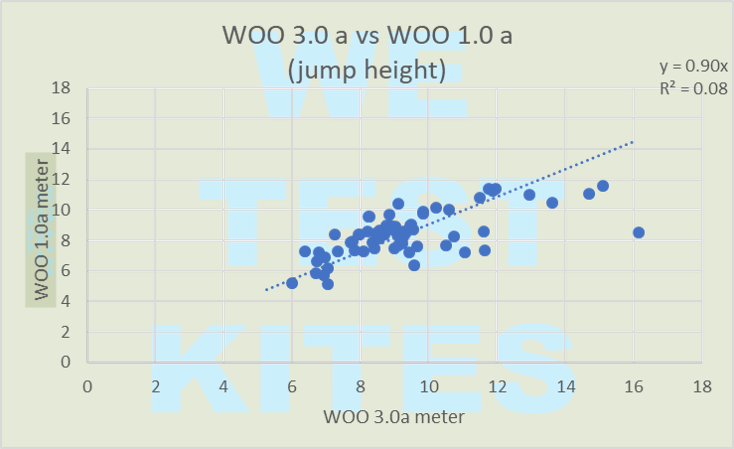 The same result is found at the other WOO 1.0; about 25% lower readings, but more worrying is again the very low R-squared. Which means these two WOO’s are different devices and incomparable. 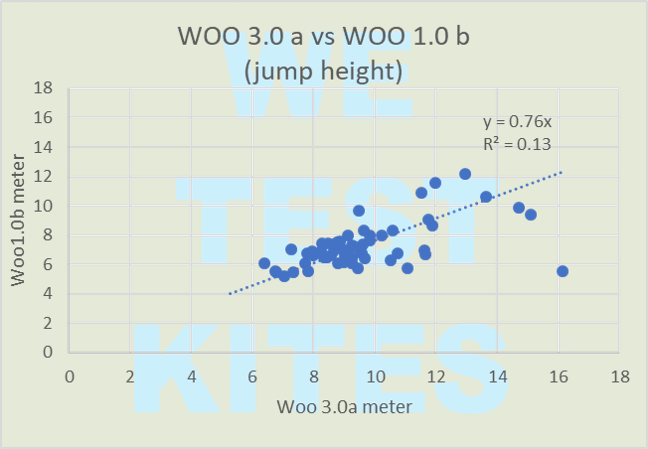 The summary results for the session with the 2.0 and 3.0 look very promising. But this is deceiving. The highest jumps are not at the same moment and are coincidentally similar in height. In fact the jumps with 12.5 and 12.4m are paired with jumps 1.4m and 2.0m lower on the other device. The correlation between the individual jumps on the 2.0 and 3.0 is quite weak and we wouldn’t call it a fair and comparable measuring devices.

WOO 1.0 to 1.0 correlation is also quite weak. Much weaker as our previous tests back in 2015.  We did use different software versions in this test but it should not be causing such a huge difference to our opinion. 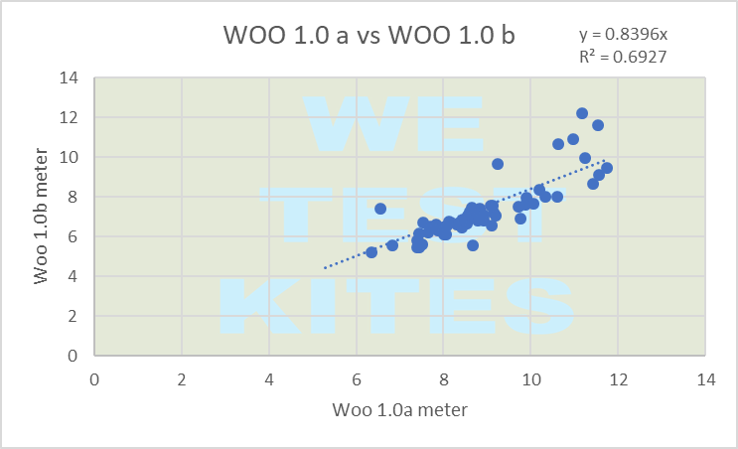 The cause of these differences between the WOO 3.0-2.0 and 1.0 versions are to be guessed; software or hardware differences, calibration issues or maybe the quality assurance person didn’t get enough time (or money) to sort things out properly? Too bad since we had much better results at some point between two WOO’s 1.0, so it should be technically possible to sort things out. Better do it before some one hits the 30m mark on a WOO 3.0 and everybody will discuss the quality of the data instead of the amazing achievement.

Statistical information on our test:

Only >5m jumps on both devices are analysed. More results on air time and g-force landings will be reviewed separately.

UPDATE OCTOBER 2019: a WAY TO RESET YOUR MALFUNCTIONING WOO 3.0

try a hard reset of the WOO since this has helped with these issues in the past. Unfortunately it will cause you to lose the sessions currently on the device but it should repair the connectivity issues. I have attached a .gif that shows how to do it through your phone so you can look at that to accompany the following instructions.

1.Download an app called LightBlue Explorer and put your WOO on standby mode with bluetooth on
2. Select the WOO (it will be named Renesas-BLE or the WOO ID)
3. Scroll down until you see the channel that says “Properties: Write” (if you select a different channel this process will not work)
4. Select the channel and tap Write new value
5. Enter 444A44444444 to establish communication with the WOO
6. Tap Write new value again
7. Enter 44BF to tell the WOO to reset

After that the device will reset for 2 minutes. You will know it worked if you try to press the button and the WOO doesn’t respond. After that try recording a session and see if it downloads successfully

Surfr. The poor or the smart man’s WOO?