We Test Kites
Home Kite accessories SHFIX; take your sneakers to the next level

Kitboarding wouldn’t exist without crazy people. Marco Zavalloni -the wicked man behind SHFIX– could have been one of those persons. By thinking outside the box but within his Italian fashion DNA he created SHFIX. A metal system to connect almost any shoe to a twin tip. By matching the right looking shoes he claims that you can finally look good. Is it our typical Dutch way of looking at it and thinking how does this function on the water? For sure his invention has gotten us the most attention ever while testing a new product.

The system is a clever metal construction consisting out of 2 metal plates. A bigger one that goes on to your board and a smaller one to connect your shoe to the bigger plate. A complete set -including shoes- weighs about 1.5kg’s. Which is roughly double that of the normal pads&straps and half of regular kite boots like the Slingshot KTV. Which says already something where the SHFIX system fits in.

Most details are very well thought of. For example there are no sharp edges and the soft material underneath the bigger plate to protect your board. And it comes with a whole bunch of different bolt sizes. You can feel the passion that has gotten into the production of it. Almost perfect. But we did find some suggestions for improvement.

As the bigger plate is significantly thinner than most alternatives like normal pads&straps we needed to get some rings at the local hardware store to mount the plate the board properly. Unfortunately to check the bolts inside the shoe it needs the bigger plates to be taken of from the board. Another option which we would suggest is the choice of different sizes of the smaller metal plates. 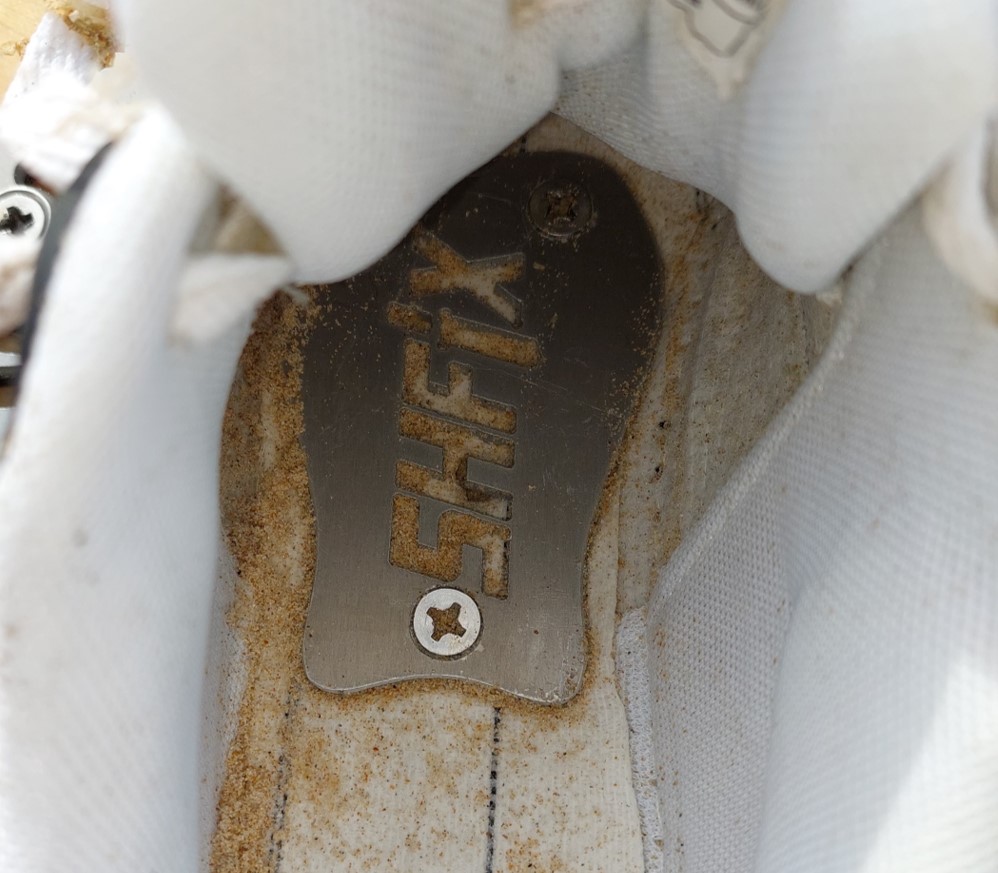 Don’t forget to take enough time before your first session with SHFIX. The first time we needed one hour to get it completely connected and ready to use. After seeing half a dozen shoe shops we concluded that the most difficult part of the SHFIX system is not the system itself. It is finding the right shoes. And we are not talking just fashion here.

We got a pair of 20 euro -plastic fantastic sneakers- in a local shoe store. But not after making a misjudgment by trying first a Vans shoe made of canvas. Way too stretchy.

There are two important facts about using the SHFIX system. The first one is that it rides much more comfortable than most of you think after just looking at it. Much much better. You hardly feel the inner plate underneath your feet. It can be best explained by the big grin on your face as soon as you step into the shoes. And camera’s will instantly love you.

The second fact is about how the SHFIX system feels like on the water. It isn’t ment to be used in ultra rough conditions. The way we got it setup (with cheap sneakers) makes the board feel less direct. Probably due to the fact the nose of the shoe isn’t connected directly to the board. However the lower weight over real kite boots makes it much more suitable for those 15-25 knots freestyle sessions.

There are a few more reasons we liked riding with our Sneakers with the SHFIX system. After riding non stop for 2 weeks we got blisters on out feet from riding straps. What a relieve to be able to get into a pair of sneakers!

We got a lot of questions about the increased injury risk. We can only say based on our 10 sessions on the SHFIX system it probably will be less risky over pads&straps (often a problem if one foot comes out). But for beginners who think the SHFIX system may prevent to lose your board we have to point out starting and stopping is almost as tricky as using old fashion bulky -and often ugly- boots. Speaking of ugly; if you think straps are ugly as well than the SHFIX system is for sure your way to go.