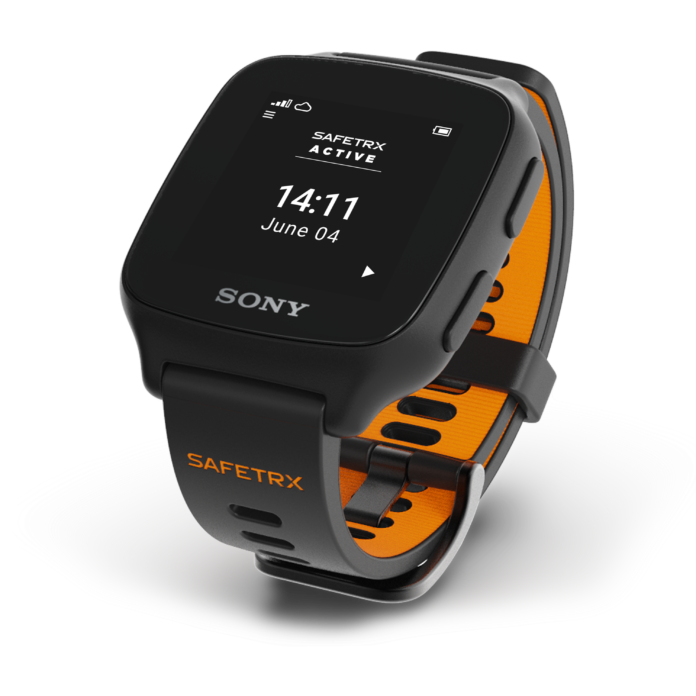 What is the value of safety? Kitesurfing isn’t a very affordable sport. But not because we spend our money on risks reduction systems. A knife and an impact vest is usually it. Since late 2021 there’s a new Sony watch with a track and trace system ‘SafeTrx’. A 500+ Euro watch with a yearly 150 Euro’s subscription on the SafeTrx system. At a first glance we had the idea it is just another expensive commercial gadget. Turns out we judged it wrongly.

Using the SafeTrx Active track and alert system on the Sony watch works impressively simpel. The whole system behind this alert is quite something else.

It all starts by pushing two buttons on the watch. The head quarter of a national rescue service will get the alert. They know which rescue department is available closest to the location of your emergency signal. The location is provided automatically near-real time. Even when you start to drift away.

When we interviewed Sander Kuipers -an employee from the Dutch rescue service KNRM and responsible for the introduction of SafeTrx – we understood why certain hardware choices has been made. “It took over three years to find suitable hardware. We wanted something that doesn’t fail if you are a few kilometers from the coast. Even when you are in or under water.”

In that light it is important to explain the key feature of the watch; the ‘Long range connectivity 4G/5G LTE-M with in-built global eSIM’. LTE-M is a new technique that enables better and further connection. This isn’t available in a lot of watches yet. And eSIM simply means there is a connection without the need to have a smartphone around.

This is why the KNRM chose a (more) expensive watch with LTE-M. Sander also explained that the SafeTrx system is a world wide project with an important role for the KNRM. So this isn’t a product by a company that wants to make money with another shiny gadget. “We want to achieve a few things with SafeTrx. First of all raising awareness on safety. Which isn’t an easy task with kiteboarders. The second one is to reduce the time needed to rescue some one. Sometimes it takes us 3 to 4 hours to find someone. Imagine to look for a dark wetsuit in the North Sea”. With a few hundred watches sold since november 2021 the first succes is already in.

But be aware that the function which directly warns a rescue system is only currently available in Norway and the Netherlands. Other countries will follow soon. SafeTrx is capable of alerting personal emergency contacts in at least 10 other countries mostly within Europe; the ‘buddy to buddy alerting system’.

Some spots have a lot of current when the tide is ‘wrong’. Windsurfers go downwind much more over kiters the first couple of hundred meters. That is why they need to go out further out on the sea to regain their lost ground. Imagine breaking a mast or a boom a few kilometers out of the coast. Much more dangerous over a kiter who will be spotted a lot sooner.

The second group who will benefit right now the most of the SafeTrx system are the hydrofoil users. They usually cover quite some distances in light wind conditions. When the wind completely drops they need help. No wind means zero assistance from other kiters. That is when the SafeTrx watch is really needed. Especially in cold conditions.

Not a smart watch replacement

For battery saving reasons the Sony watch has been limited to the SafeTrx and a tracking app. Which means no Whatsapp, Facebook or other apps you normally see on a smart watch. A pity. So the watch should be worn specially for a kite session. The reason is quite simple: to make sure the battery in the watch doesn’t run empty (see the reaction from Bernhard Ritzer below the review). Don’t forget to charge it after one or two sessions since the battery life is still only a few days.

Although this not-so-cheap step towards more safety is a very positive one we do have the hope the system will evolve quickly. The most important rule – to always ‘buddy up’- shows that the best safety come from other kiters. Nine out of ten times much quicker and sufficient over any rescue service. Imagine having a system that warns every watersporters within a few kilometer. Including a rescue service. Ideally a system that is interactive. How? Maybe by using buttons on the same SafeTrx app on any smart watch. That would create a much broader audience -and thus development- over a 500+ euro watch. The only alternative – a personal locator beacon (PLB) – is more bulky and we do not have the impression those PLB’s will be improved.

To avoid unnecessary battery drain and competing applications, we prioritising safety. The app does send data to the cloud where it can be accessed from a companion web app, from where your contacts can track you in real time and you can share data to Strava or other social platforms. It is recommended to charge the watch before every session, which takes less than one hour from empty. SafeTrx is still very young wil evolve a lot. Add-ons like shark and weather and even watch to watch alerts are on the SafeTrx roadmap for 2022 already.

Alternative bars. Tech talk and a test of a 279,- Euro bar