When the wind really picked up -close to 30knots- our biggest test rider came back to the beach within 5 minutes of riding the 9m Pinna. He just had to rush back home to get his WOO. With that unforgettable I am going to set a record today face. That says quite something about the Ten Pinna. But most of the time the rest of us took this 9m Dutchie out for a ride when we didn’t feel like using our 11m. The stable and quite powerful Pinna simply laughs at windholes and is a more than logic choice for that newbie that needs a kite that isn’t all over the place.

Ten -designed by the experienced riders from the Dutch Versus shop- have two kites in their line up; the big air oriented Velox and the Pinna. Ten calls it “A kite for all kiters who want to have fun kiting, pure and simple”. But what did we think of it?

And the start is good; the big and stylish bag (certainly compared to the latest ones of Duotone) is how we like it. And there are no details of the Pinna kite that are inferior to bigger brands. For example the usage of Triple ripstop. Unfortunately the Ten bar wasn’t available for a test. And just for the record: it needs the most common bar; low v with 23m lines. 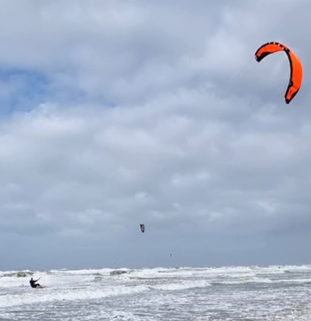 Out on the water we all agreed that this second version (be aware that their are no indications on the kite it is version II) of the Pinna suits two kinds of riders; the first and biggest group are the ones still learning. Particularly the one who don’t like a quick (nervous) kite to start out with. The solid feed back from the Pinna on the bar is always present. Which means you quickly stop looking up at what angle the kite is hanging. It always a great moment when kiting isn’t giving you a pain in the neck any more. That the kite performs better than most other kites in light wind (i.e. a good low end) will be a very nice bonus to them.

The second type of riders are the more heavily and/or stronger ones. Who can appreciate a kite that take them airborne without the need of benig a very technical skilled rider. And who don’t get scared of that extra bit of hangtime. Be prepared for that typical second lift. Perfect for board off’s and other old school tricks. On the other hand the words like agile or mega loop isn’t what we associate with the Pinna.

So our 95kg test member had a blast of a ride when the wind fired up towards the maximum high end. But he also explained about the amount of strength he used to get the kite in a proper landing position. You won’t be the first with the Pinna who will make a painful smashing landing -due to a too much backward kite position-.

The Pinna was the most powerful and stable but also the least reactive kite we had while testing a bunch of different kites. Quite important detail: there is a simple way to make both the bar pressure lower and (thus) improve its reactiveness. Move the steering line from the standard (middle) position to the outer one. In that (our favorite) position it becomes close to the a combination of the power of a Slingshot Rally with the reactiveness of a Core Nexus.