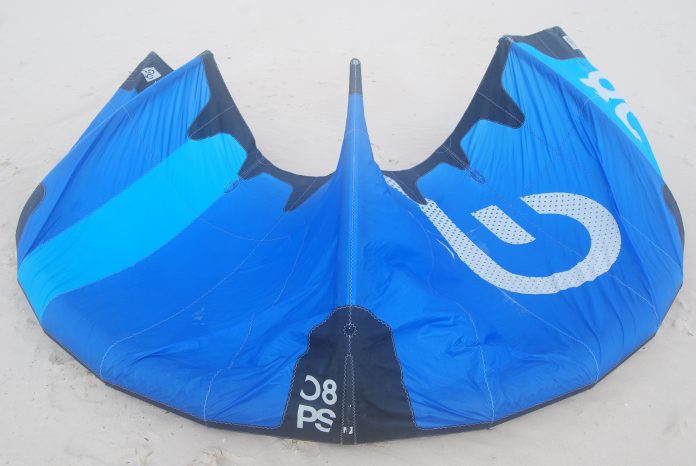 Former Best designer Peter Stewie is now in charge as the designer for Eleveight. His personal twist on the Best Roca, with a pulley on the back line, comes back on the PS Eleveight in the form of an elastic bridle. The PS, a true beginners kite, often stated on webshops as “Schools only” is -below 800 euro’s!- incredibly low priced. It isn’t the most advanced developed kite, but it is well build and comes from a brand which internationally jump started in 2017 since a lot of people see Eleveight as the follow up from Best. Which means selling it again won’t be such a problem. This may be quite important as you will grow out of this PS  much sooner than do-it-all kites that are less focussed to beginners only, like a F-one Bandit.

You can certainly tell the Eleveight kites have been made by an experienced team. In this case German engineering That have come from a long way . That way and those experiences are related to the brand Best. Best took a big step back the last few years, which has led the selling strategy back to how hey started (online only). But also to let go of a lot of its sponsored professionals and its designers. This not only helped Eleveight in a lot of designer experience but also instantly got a worldwide network.

It is quite unclear if just schools can buy the PS. Some webshops state schools only. In most Eleveight shops it is more likely to see other series (like the RS-series) on the shelves. Nevertheless it draw our attention by its amazing price.  The PS is designed for a bar with low-splitting 22m lines. Unfortunately we couldn’t test the Eleveight bar. The PS has (partly) elastic bridles, which we have never seen before on any other kite. Do we see a similarity to the Best Roca which has an unique -but silly- pulley on the back lines…?

The PS is clearly a kite which is aiming to satisfy the new-be’s at the kite sport.  Does the three strutted PS have other benefits over other beginner kites than just its price?

O and before we forget; Kite industry please make a standard inflate. Please! We own too many pumps due to your awkward tiny little differences. Shame on you, for an industry that is so close to nature!

The weight of the 8m is -remarkably- a bit higher than most other kites we have tested. It says something about the strength and building quality of the PS. But the canopy is made from traditionally single ripstop. A bit old-fashion. This canopy can be found on a relative small amount of 2018 kites, like the Slingshot RPM. Most other brands already have switched to double ripstop.

The 2 battens in the trailing edge contribute to its weight, but it also helps the kite to keep delivering the power in more windy situations. The bar pressure is medium to heavy. 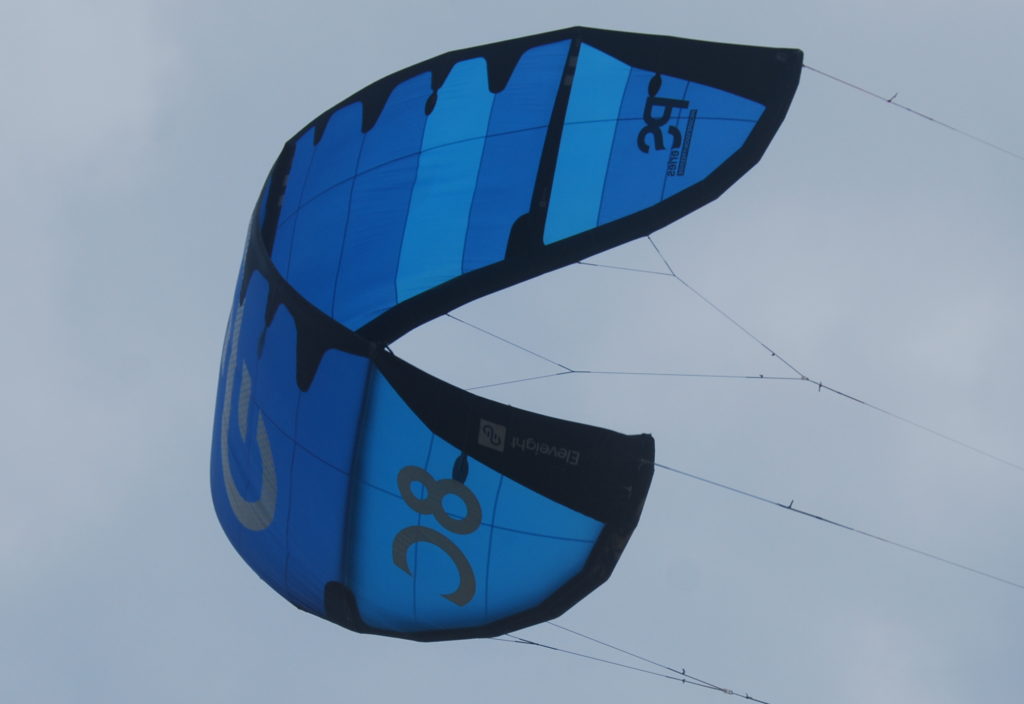 Especially in more windy situations we found the kite quite overwhelming.  Getting rid of the power by pushing away the bar wasn’t quite such a succes. Something we have experienced with the Slingshot Rally before. We are not sure if a beginner would be happy with this aspect of the PS. It is not a difficult kite to get acquainted to. Although somewhat on the heavy side, the general feeling of the PS is quite natural.

The low wind capacity is quite amazing for a 8m kite. It is also easy to feel where the kite is due to the relative high bar pressure. And if you look at it you will see It looks a lot like a bow kite. Which fits very much the test results.  Great for relaunching. And every square meter is efficient. But we do have to say that the feed back of the kite, probably due to the elastic bridle, can be a bit wobbly.  This is something that probably isn’t much of an issue for novel kiters. But more experienced kiters will find this aspect less attractive. 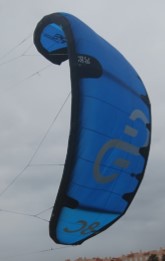 Same goes for jumping. Although you may ask how relevant a jumping ability for an beginner kite maybe. The ideal moment to pop the PS for a jump is quite long (and thus not that difficult). Which means it easy to get air born, but will result in quite floating, but lower and less extreme, jumping. And when jumping it takes quite some effort bringing the PS to a position where it can be used to absorb the landing force. Which is quite the opposite from a F-one Bandit for example, which is quite a bit quicker and less force needed.

Would someone who get taught on the PS keep it and get it as his first kite? Although its low end and price is great, we guess it stops very much by just being that teaching kite. People that are new to the sport will have little knowledge which kite to buy for the first time. A lot of them will buy one which they used for their lessons. In general we think this kite should be a kite that is forgiving, quick to power and depower and be not a very powerful kite. Kite’s like the Airush Union, F-one Bandit or the Cabrinha FX wil probably be a much better fit to them. Their relaunch may not be as good but it will make so much up and deliver more capabilities and more fun,  particulary after the first months.