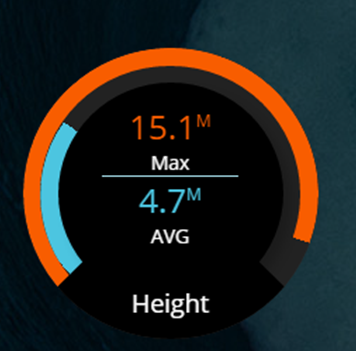 Bad news. Although there are now two devices which can record your session, they are not the same. And we are not referring to the extra capabilities due to the GPS logging of the Xensr. No, we are talking just about one thing: measuring the height of your jumps.

With the arrival of the new Xensr the main question is can we compare the WOO and the Xensr? Since the competition is full on -and heating up due to events like the KOTA– on the WOO leader boards it is interesting to see if we can have a combined or comparable leader board. 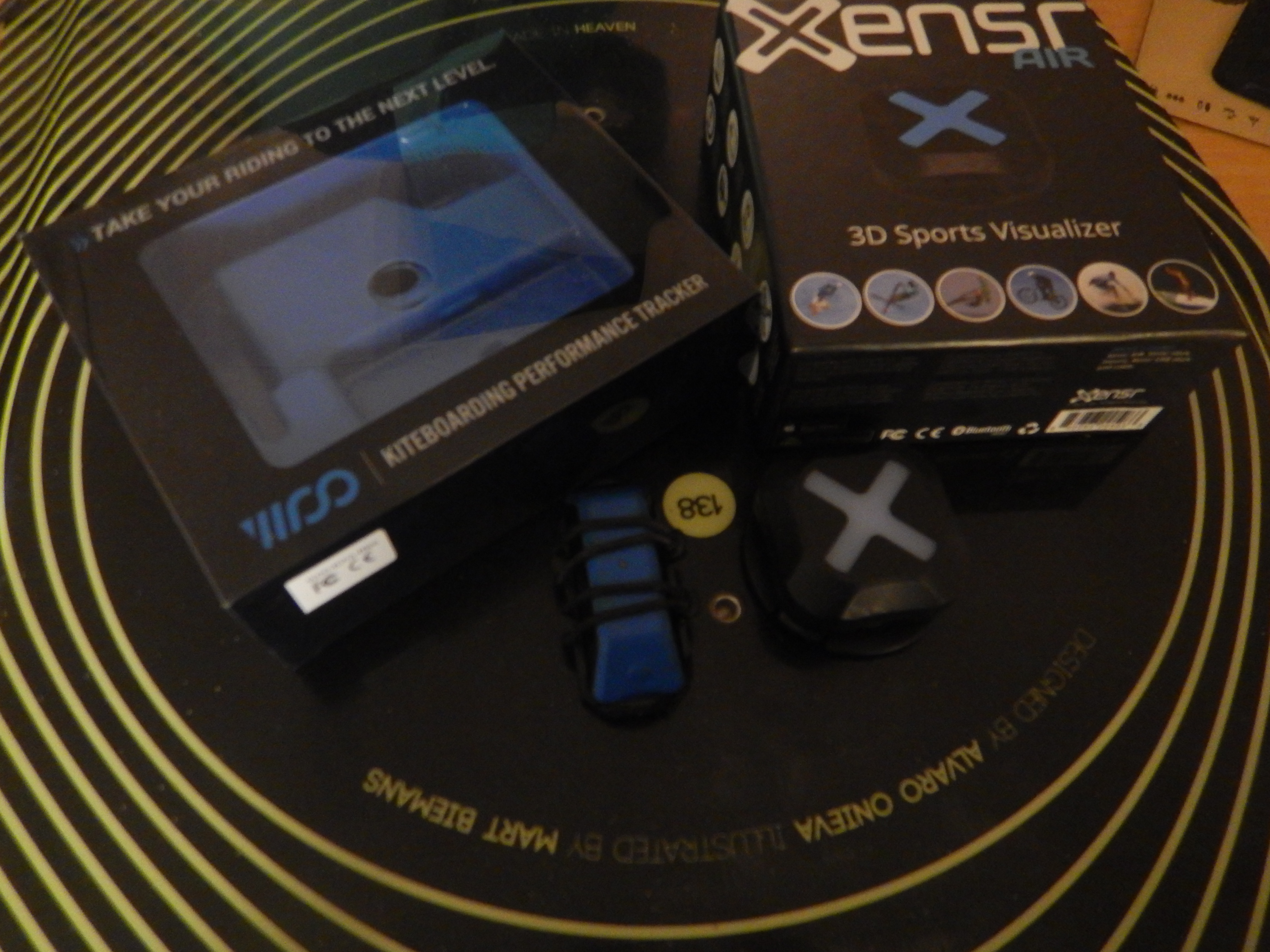 The answer is NO. There are a couple of reasons, and we will try to describe the most important ones. One of the things which is really, really hard for both devices (as described in our one WOO compared to a second WOO review) is not to report any spikes or suspicious data; rather have one doubtful registration deleted than to see a jump of 30 meters while there was no jump at all. At this point one of the two devices has suspicious -and there for game ruining -data. In our test the highest jumps where not at the same moment, we found a medium correlation, including an offset and on top of all a lot of jumps (up to 40% at one sensor) are not registered at all.

We tested one WOO to one Xensr for almost 2 hours in one session. Of the around 120 jumps we deleted all jumps under 5m and only compared jumps within 5 seconds. This left us with 30 jumps which can be compared. The correlation graph shows that the R2 (which should be really close to 1) is only 0.6. The correlation gets better when adding a constant (so in our test with a lot of waves about 2 to 3 meters and used as a kicker for most jumps). This gives a relation of: WOO=0.54*Xensr + 2.8m but still with a questionable R2 of 0.84 (we would call that a medium correlation). So if you see a Xensr score of 15 meters a WOO will report (in wave conditions similar as ours) around 11m.

Suspicious data where found at 2 occasions at the Xensr. One is when we had a jump of 15.1m, flying 5.9 seconds at 13:04. Suspicious is that it adds a jump directly connected at 13:10 of just 3m but with a relative big air time of 5.8. This -highest on the Xensr- jump is not recorded on the WOO at all. The second jump at 13:10 wasn’t there for sure (it was just a turn). WOO explains that it may have been 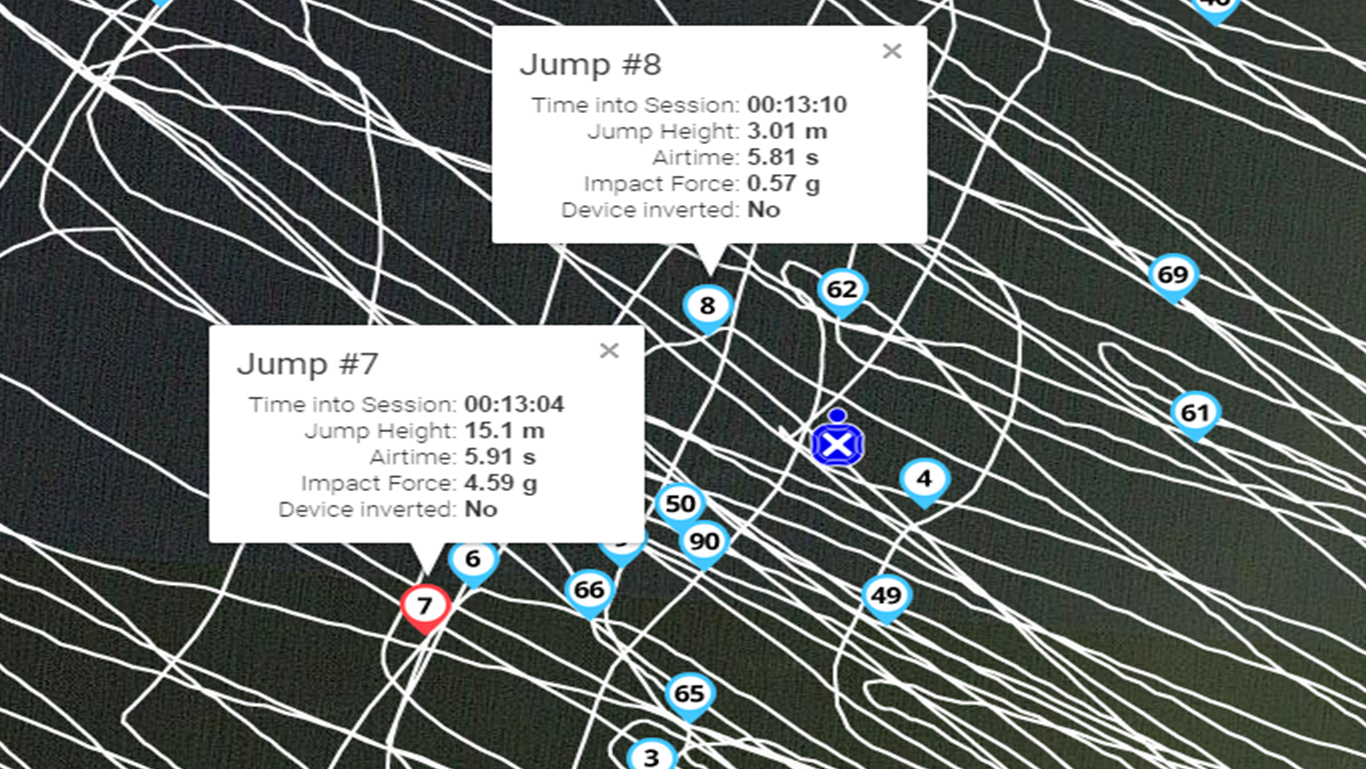 a very smooth landing and too difficult for the WOO to register. Both sensors probably failed here, but at least the second jump on the Xensr is incorrect and may have affected the reading of the first. The GPS log (see screenshot) does implicate that a substantial jump was made at this point.

The second moment a suspicious reading of the Xensr was displayed was that of an in house (non moving) moment. The device was turned on and off and recorded a false jump of 27m. Of course a

honest rider will just delete is, but someone eager to get high in some sort of leader board will use these data.

Both devices missed a lot of jumps, even just focusing at 5m and higher. The WOO missed around 7 and the Xensr around 18 jumps and both devices record and store a lot of jumps in the 2 to 5 meter range which are to random (in time) to compare and in our opinion are useless to store. 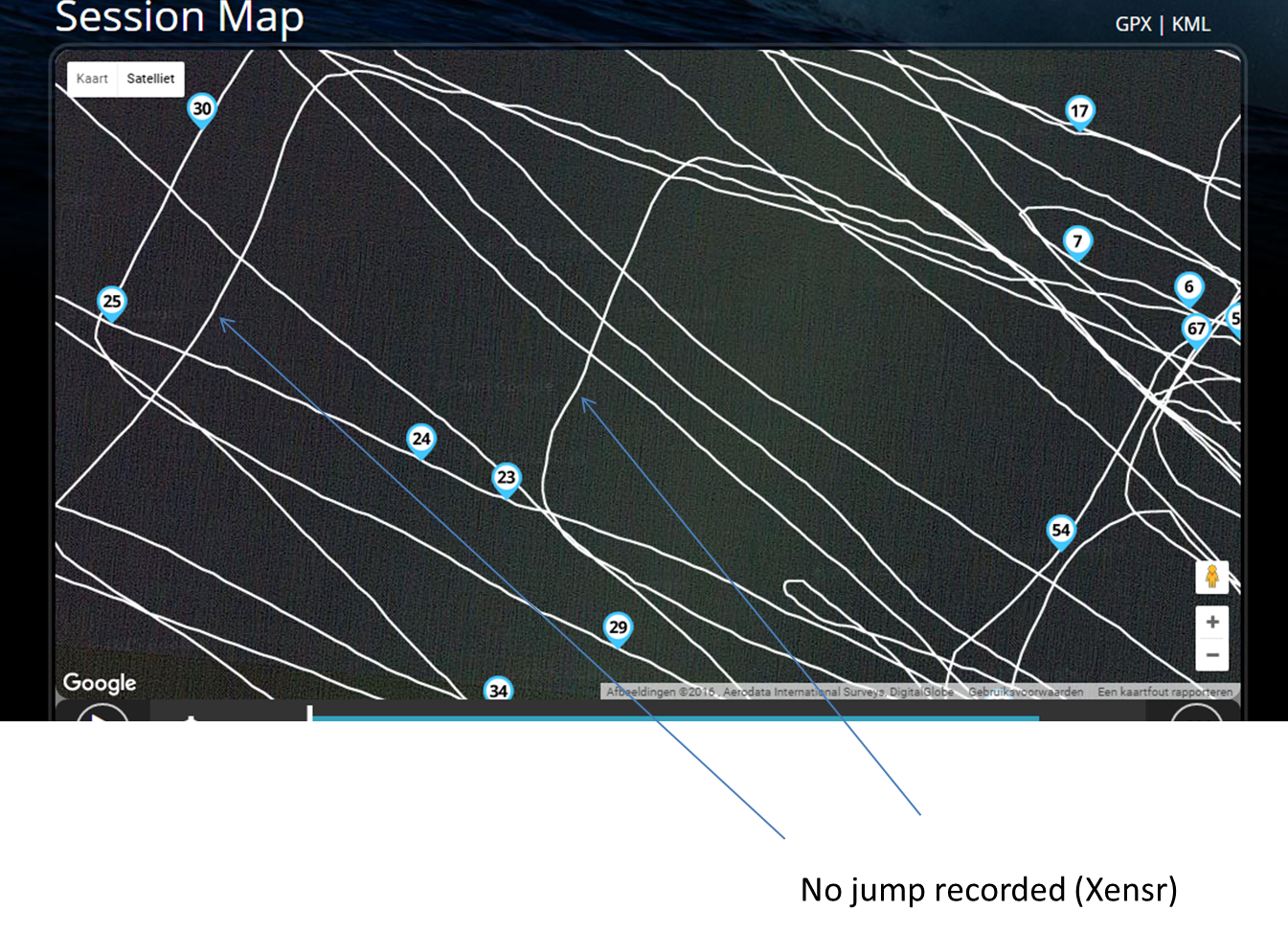 We know two devices of each sensor for this test would have been a lot more useful (although we did already compare two WOO’s), but we rather answered the many questions we got ASAP instead of waiting for a chance to have two of both sensors. Also the statistics could have been better (for the hardcore statistical dude’s among us we agree an orthogonal regression should have been applied but this doesn’t change the conclusions).

This test is not a comparing of the functions both devices may have, but just on the height data. At a later stage we will get back on more details like the air time, g-force and usability for other sports. At this point we hope both company’s (WOO already reacted and does see some points of improvement and acknowledge for example the conservative interpretation of suspicious readings and possible influence of adding a wave in the height displayed) will take note of our findings and may update there software. In our opinion things can improve and may end up in fair and comparable height measurements, but still needs a lot of attention, especially on the sensor reading in the Xensr.

Xensr did respond a few hours after the review came out;

“We have a firmware coming out which will address many of the issues you guys ran into.
Like any new product release, there are some initial release issues, and we’re working through them in short order.
That is by no means an excuse, its just an example that many new products have release bugs which are quickly resolved in the first few months.
As always, ping me with any questions you might have. “
David Troup

Surfr. The poor or the smart man’s WOO?