While the newest 2016 models of Slingshot are just released, we noticed a shift in models. It seems that the new wave kite Wave SST pushes the Rally 2016 more to the position the RPM used to have. Will this fifth version of 2015 RPM be the last version of the famous RPM? We tested it while admitting the RPM appeals to us much more than the Rally, mainly since the Rally seems much slower. 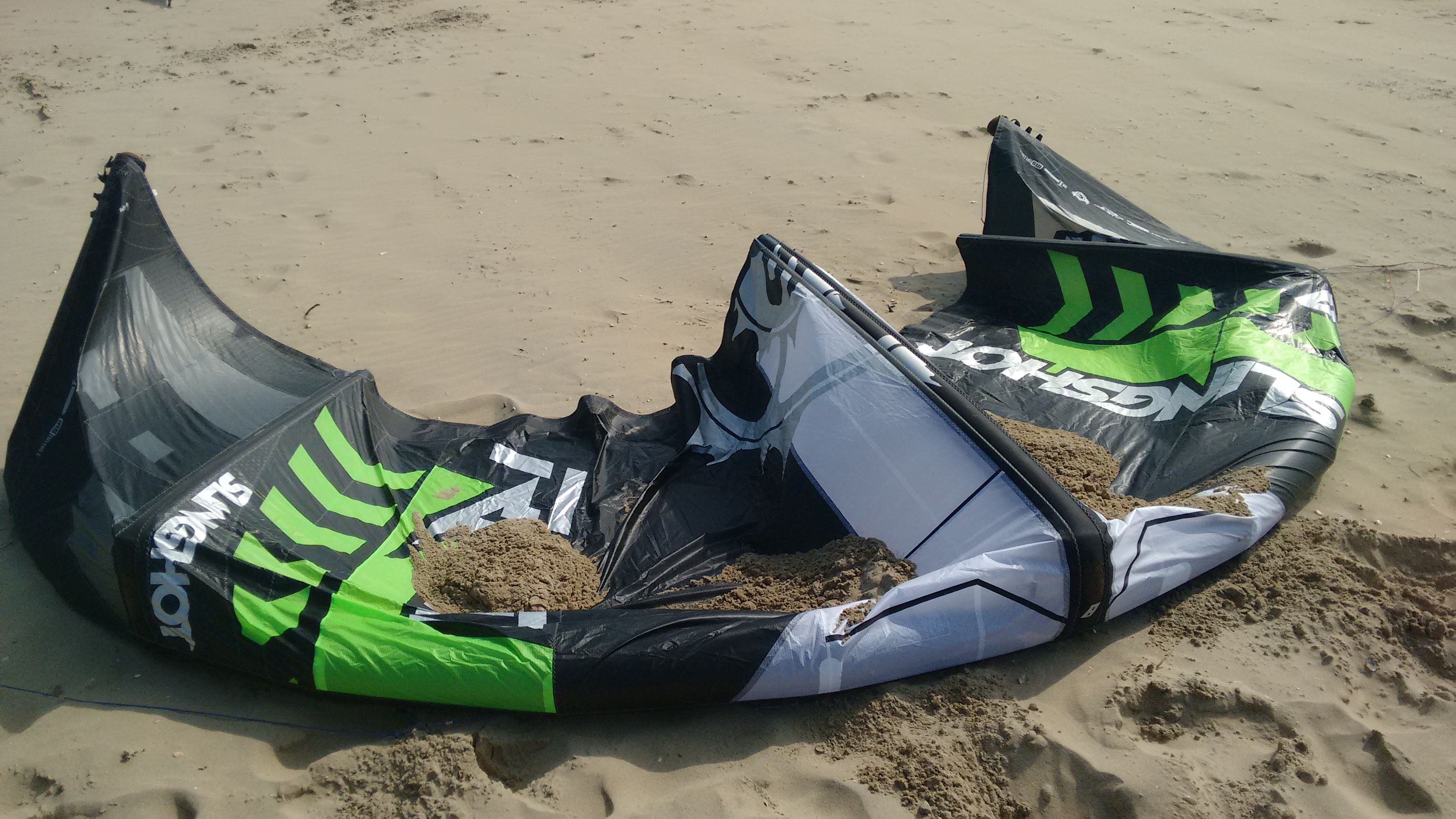 the RPM 2015 is the fifth version of a kite which became famous when Youri Zoon won the 2011 PKRA freestyle competition with the RPM. But Slingshot is also a brand with a big name. It is generally known for its bomb proof quality, but for the RPM we have heard too many rumours that it has a weak point which makes the kite snap after a couple of years of usage, or even sooner. However the 2015 version -as mentioned in the Slingshot product video– should be reinforced on this point. 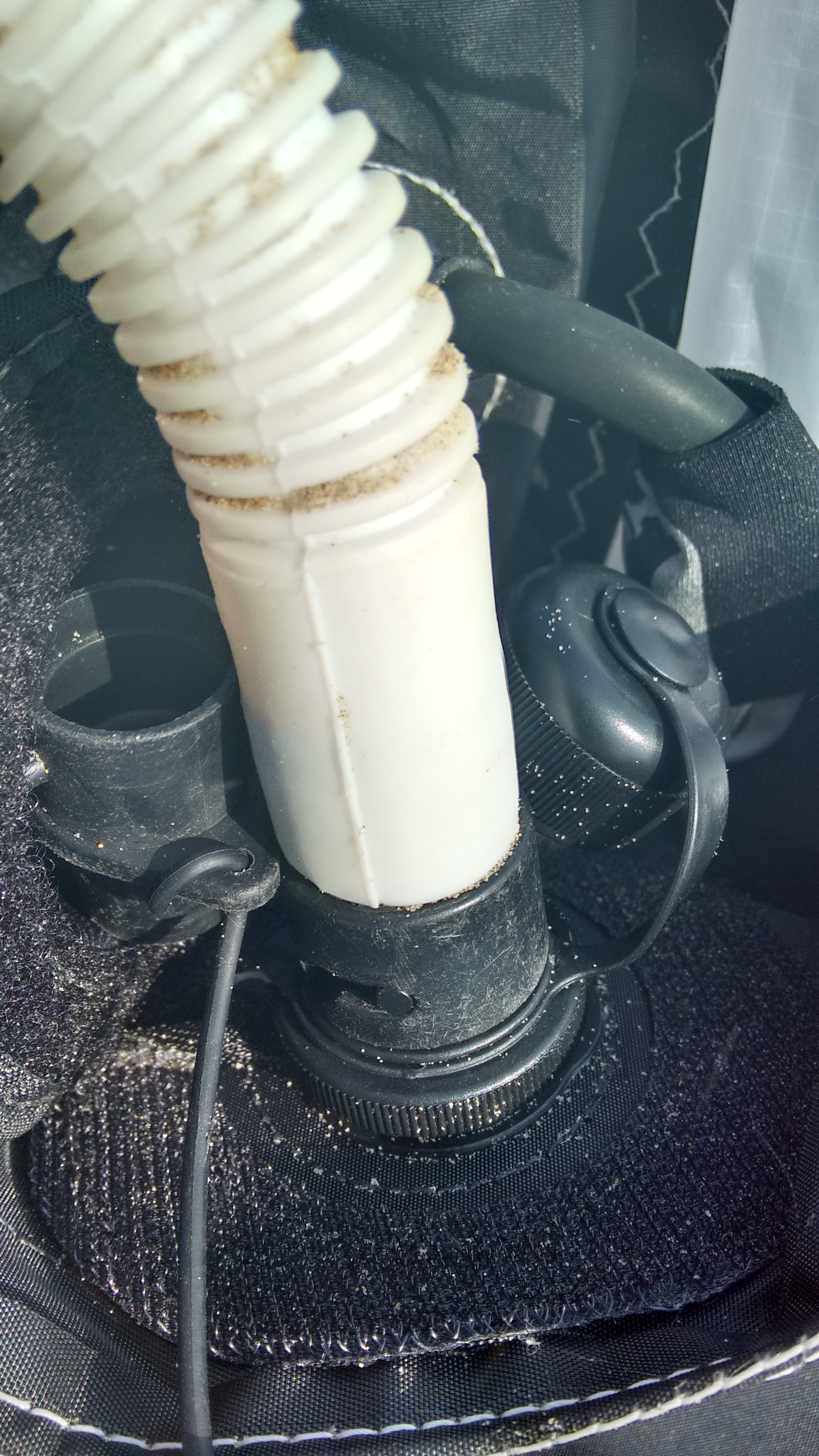 Slingshot was one of the first brands to introduce a one-pump system to its kites, so no need to worry about that. What is kind of late is the introduction of a large inflate, but it works very well. It needs a pump that has a hose with an opening like North has. The wide hose exit, like a lot of brands have (like Ozone, Best etc), won’t work. No wonder Slingshot provides standard a hose on each RPM.

The major changes that should affect the way the kite handles, are on the (complicated) bridles, called IRS; Intuitive Response System. They are now without pulleys.

A remarkable detail is that it is close to impossible to find any recommendations from Slingshot on their website on details that matter, like the settings of the bridle or the pressure that the kite needs to perform best. In the RPM 2015 video a lot of promises on improved design, durability and performance, but no explanations how to rig the kite for different purposes. Something that we think is the major pro for the RPM; its versatility due to the multiple settings that are possible. Looking at the product video from Slingshot, it is almost only unhooked tricks that are shown. Is Slingshot showing in this way the RPM is intended for the hardcore unhooked freestyle rider?

So when reading any RPM review you need to know on what settings the kite is used. The RPM 8m has three important options. The first is on what settings the bridles are set. Either on wake style settings (inner) or on freeride (outer settings). The second is on the line lengths; either with 23m lines or with 20m lines. There are also 3 settings for the back lines.

For kites from 4 until 8m a 17inch or a 20inch bar can be used. This 17 inch bar has 20m, lines the 20inch 23m. Those 3 meter differences give quite a large different feeling. 20 meter lines a way more direct, but also lose some of its low end reach. Kite loops on 20m lines or 23m gives a whole different feeling. With 23m the kite needs a lot of input and is slower in the turn, the 20m lines will give the real yank a mega loop needs. But at 20m lines you need a knot or 4 more to really get high enough to do such a mega kite loop.
The front lines are, as they have been for years, bigger (in diameter) and stronger than the back lines. The bar is a bit rough (especially for the ladies)and we don’t like the huge swiffel (which is there for years). It doesn’t do its job (rotate) on its own and it is unnecessary heavy. Another issue is the under the bar depower system. When this is on full power, it is too hard to get it depowered again. Apparently Slingshot finally realised it and now from 2016 models on offer a bar with both under and above the bar depower systems.

We tested the RPM 8m with a 17inch bar both on 20 and 23m (3m extensions) lines. We set the bridles on both positions and tried it while adjusting the back lines.

The wakestyle setting (see photo) gives a lot of pressure on the bar, even when the back lines are at the lightest setting. Too our opinion this is too much for the average rider. A freestyle oriented and stronger rider will like the stability and will like the feedback you get from this setting. We needed the stopper ball a lot in this setting…

When the bridles are set on the outer positions the kites changes a lot. It becomes lighter and softer. It is better to set the back lines one or even two steps back for a kite with a bit more bar feel. We did most of our testing with the 23m lines on this settings.

The kite, all though only having 3 struts and no battens feels very firm. The RPM is quite fast and responsive, even with the 23m lines. The pop is quite short and aggressive, although (on 23m lines and on free ride mode) not as aggressive as the Best TS or the GP. The RPM is not a magic low end kite and neither keeps you air born like a North Rebel or a Ozone Edge, but it can handle a lot of wind. Depowering is quick and easy. It also has some raw edges which has to do with its freestyle capabilities.

For example looping the kite gives a certain moment in the loop a typical delay. It is also felt when steering quickly; it reacts immediately but it feels like the kite come to a stand still a little while later. We found the RPM (on 23m lines on free ride bridle mode) to have some similarities with the Ocean Rodeo Razor and a bit of the North Dice although the RPM can be set much more aggressive by resetting the bridles.