Air time, with the capital A. This Ozone kite really is something different than other kites. It is all about jumping. Of 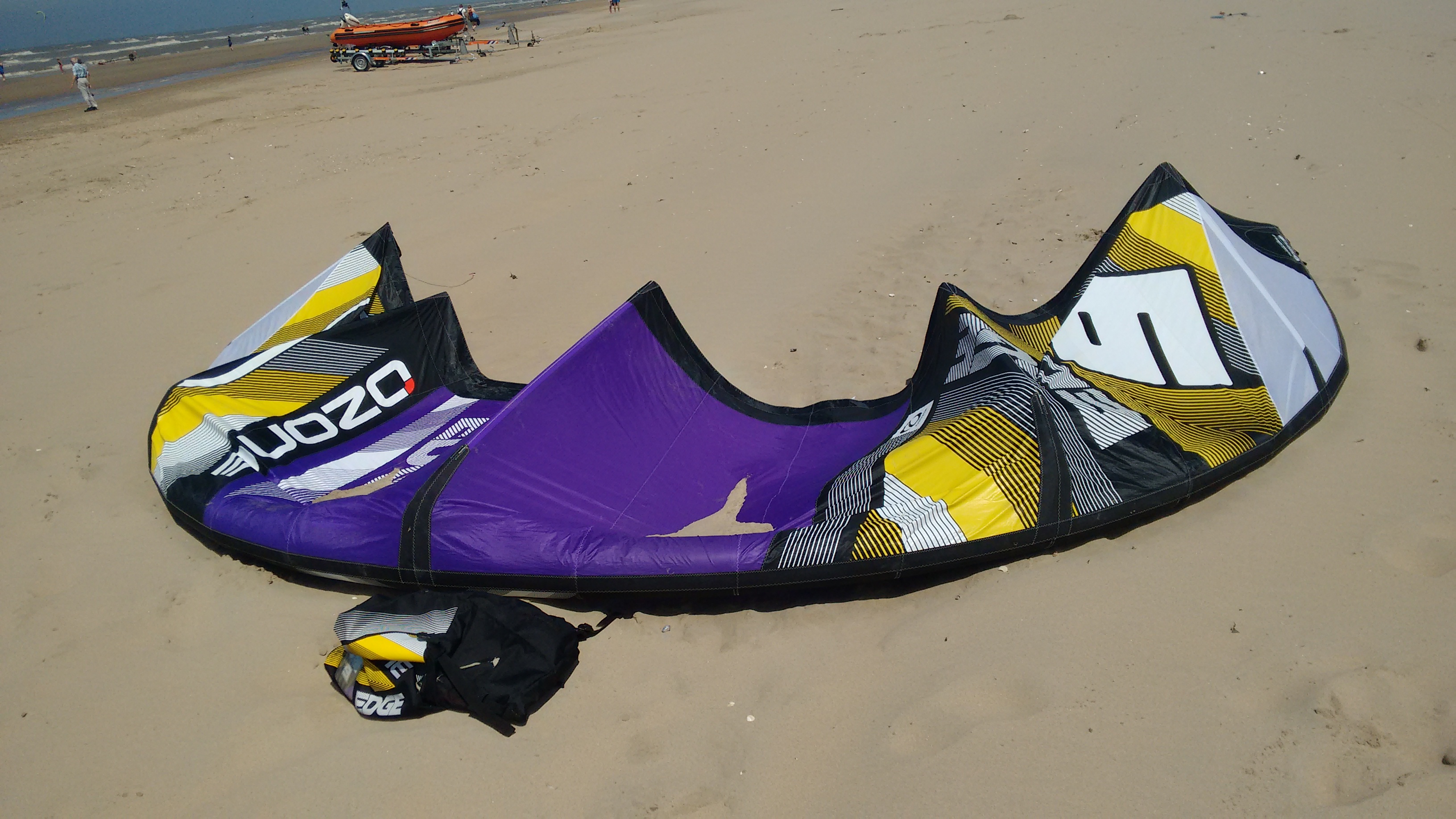 course the kite can do a lot more, but it beats all our previous tested kites in air time. We tested the 7th version of the Ozone Edge. Although it is not the newest version (the v8 is just released), we still want to tell our experience with this extraordinary kite.

The Ozone Edge is not only designed for big air but also to win race contests; taken riders to the top of race podiums around the world. Our main question? Can an average kiter go big and enjoy the kite on a twintip?

Ozone is a company with a long and broad history. It is into all sort of kite related sports, like paragliding kites, land- and snow kites and benefits from its long experience. It is has a solid reputation in the quality of its products. Ozone has announced that from 2015 and onwards their products won’t be given names any more on a yearly basis (i.e. CATALYST 2015) Instead they use the V for Version.

The Edge V7 has a relatively small leading edge, 5 struts, no battens, a large inflate with protection cover, one pump and simple bridles without pulleys.

We used the Ozone contact bar thas has been reviewed in our Ozone Catalyst review. Basically we are quite happy with the bar. The only small remarks we made were on the missing stopper ball (which seems to be impossible in combination with a plastic cover on the depower rope) and the hard edges at the end of the bar. For the Edge less relevant than for the Catalyst is the somewhat strange line length options; 25, 20 or 15 meters.

We tested the Ozone Edge 9m in open sea with moderate waves in a steady 23 till 26 knots of wind. The light bar pressure is one of the first noticeable flying aspects of the Edge, it may even be lighter than for example the Best TS. When we saw other people using the Edge, we expected a slow reacting kite. And yes, the kite responsiveness is slow, but not as slow as we thought. This slow responsiveness and the shape of the kite (long) makes it unfit for a powered kite loop. It just isn’t made for that. What it is made for is jumping. Although timing for a jump with the perfect pop takes a while to get used to with the Edge, it gets you up any how. Once you are up it floats really long. Longer than any other kite we have tested so far, so major airtime. If yo are into old school moves, like board off’s and deadman’s, the Edge is an ideal kite for it. It may also be the best kite to get in the top of the WOO leader board. As you may have seen the current world record is achieved with a kite that feels a bit similar as the Edge, the Rebel from North. 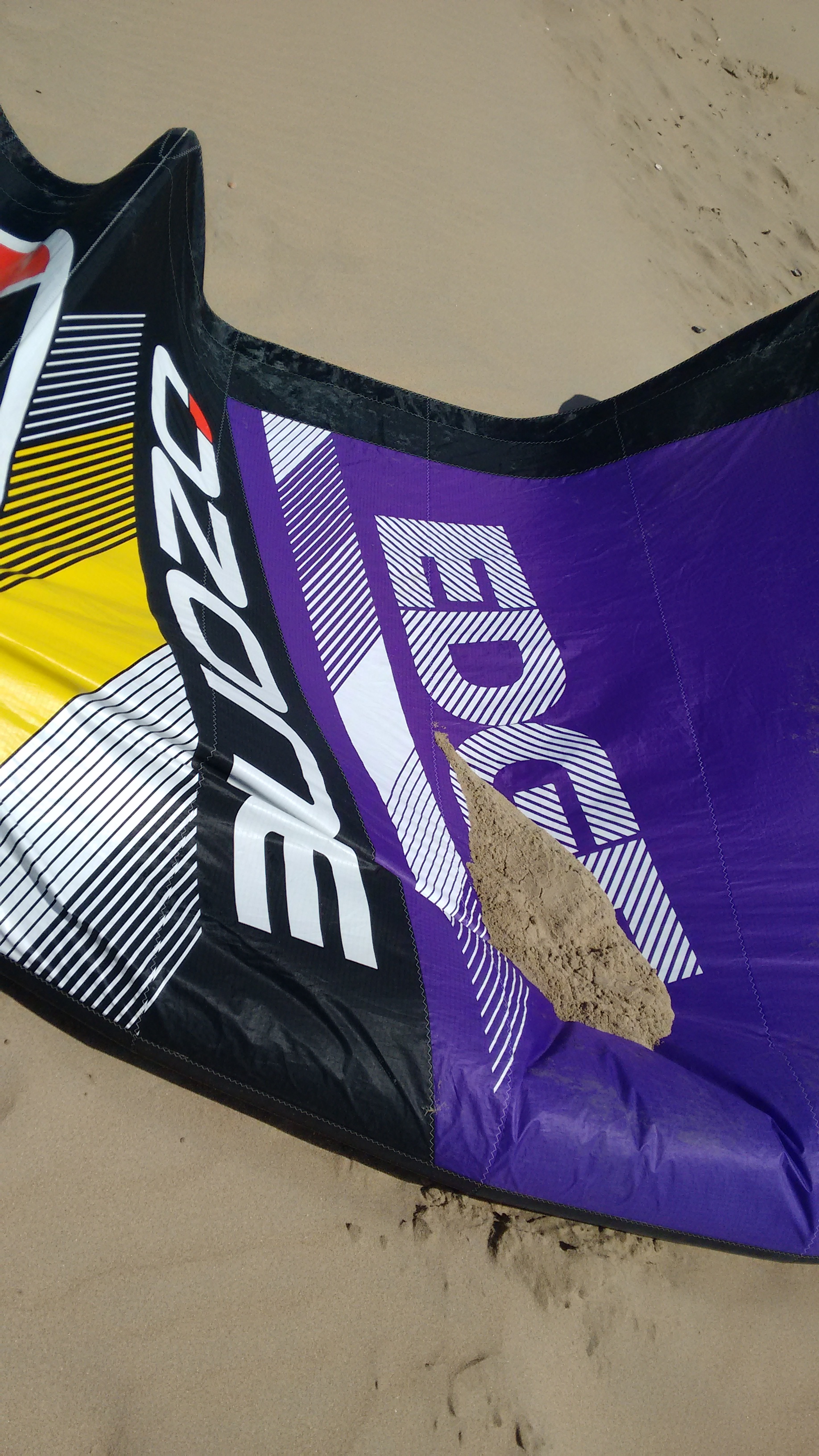 The Edge does have its specific manual; for example it needs a lot of input for a good jump (swinging the kite back). The power reach on the bar is quite long; it is far from a power on-off kite which is the reason the perfect moment for a jump is hard to find an makes the pop softer than most other kites.

We didn’t test it for wave riding purposes, but our guess is the long power range from the Edge makes it less usable for wave riding. Also its racing and upwind capabilities are a bit hard to judge and depend largely on what you are using as a board. We did think it was easy to go fast (probably due to its skinny leading edge) and tack upwind quickly, but we don’t dare to judge the kite in this area too much, since this requires specific testing and comparing.

One of the amazing things, next to the huge air time, is the wind range in which the kite can be used. It gets going in low winds pretty easy but the Edge is also surprisingly easy to handle in bigger winds. We think the Edge has some similarities with the North Rebel, but the Rebel (which is without bridles) has more bar pressure and is a bit more aggressive.