Ready to fly away? Ten kiteboarding sells tickets to the moon. The Velox stands for massive hang time. Perfect for old school tricks like board offs and deadmans. Toby Brauers wet dream. The list with pro’s for the Velox is much longer than just its hang time. Incredible windrange, predictable easy pull, unaffected by gusty winds, doesn’t need a kicker nor an expert to get airborne, nicely priced and it doesn’t feel as much of a tractor as it may seem. On paper it is very close to the perfect kite. But despite this long positive list it does have its Achilles heel. As mentioned by the Dutch designers to us ‘it must be your thing’.

TEN is basically run by the owners of the Dutch shop Versus. Guys like Eddy Lansink -owner and designer at TEN- brings over 15 years of kite product knowledge from previous jobs at Flysurfer for example. More importantly the owners of TEN are well informed about a wide variety of kite brands. While creating the Velox TEN kiteboarding had just one goal in mind: making the best big-air kite without any compromise. A tube kite that comes closest is the 1700 Euro kite Ozone Edge. Both five struts and aimed for a specific goal. Very outstanding is the shape; long and narrow. The Velox is the highest aspect ratio (length over width ratio) tube kite we know off. With just 3.2 kg’s it isn’t heavy for a five strut kite. What would happen with the weight if this triple ripstop canopy kite would have less struts? New stiffer material has appeared which probably are most effective on kites like this.

Although the looks and its description makes it a niche categorie type of kite. More niche than for example a Rebel or a Raptor. It is good at more than just making impressive long jumps. Both the low- and high end are superb. It is striking how much affect adjusting the depower strap just a few centimeter has. It is less sensitive to gusty winds compared to other kites. It is far from a responsive kite but does react like a powerful airplane with a relatively pleasant feed back on rider input. Take off and landings are so gentle and fluid you want to applaud for the pilot. Jumping with a Velox needs little board technique nor a big wave. It proves its added value most on flat water in the hands of a less skilled heavier rider.

Hang time guaranteed. Mastering board-offs, dead-mans, multiple back- or forward rolls? This is your kite. We also took the Edge out on the water together with the Velox. The differences -if you can trace them- are certainly not worth 600 Euro.

When you are on a spot with waves as kickers to get air born things are a bit different on the Velox. Aiming for the perfect take off on a lip of a wave needs more time and accuracy. Its Achilles heel pops up here. The reaction of the kite is simply slower. And that induces also a less aggressive pop. The Velox has a big huge circle to go round. Still there are people who will mega loop it. Impressive, insane and mad. But for most of us a big no-no.

The slow motion steady force makes it far from a bump & jump throw-around kite like a Bandit, Dice or Enduro. Where those kites are more like g-force generating F-16 fighter plane the Velox Boeing 747 is made for those other sessions. The ones where the wind direction just doesn’t line up for a kite loop session and you just decide to go for old school board offs. 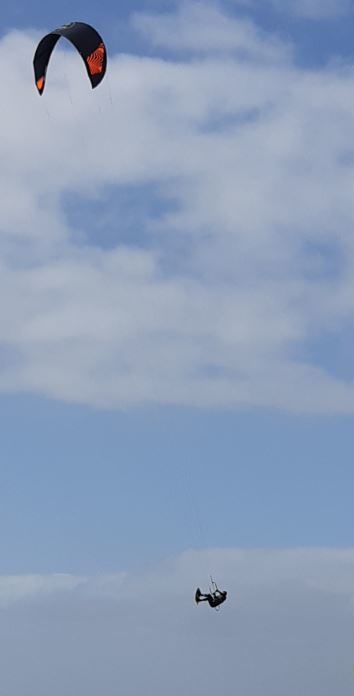