The Roca, the follow up of the Kahoona, fits much better in the Best line up being less far away from the TS as the Kahoona used to be. For beginners till intermediate level it is a very good kite. Both the performance and quality are as a you may expect from an major brand. Good to have for a kite school and certainly for an average twin tip rider. But the users must like a low bar pressure and the soft, though very rapid power on-off kite. It can get a nervous feeling though, especially in gusty winds.

The Roca is the new entry kite in the Best kite line up. Mind you the TS, although marketed bij Best as the Do it all kite is more a performance kite than the do it all claim suggests. So the Roca may have a good chance filling up the gap to the TS.

The second version of the Roca has the same price as the V1, which starts off with a rough 10% win compared to most brands which did raise their prices. After saying goodbye to some major (all?) paid pro-riders, taking over the Iron heart safety system and some other small features from North (like the pulley and the stopper ball), Best seems to use much more its sensibility over image building. In the recent past not all Best safety systems did work properly, so using one which is proven to work is an example of Best’s safe and wise decision. The inflate is also changed in the 2017 (V2) version. It looks like any pump will fit, but this is not entirely true. We had a North pump which almost fitted, but seemed to miss out a few mm to properly fit. Best also removed the gummy triangle in V2 on the trailing edge which was present at the first version.

The three strutted Roca, with four battens, four lines, bridles with one pulley also has a pulley on the back lines. This is not very common, and the effect of it seems minimal in the middle setting. It does get a strange look when set on any other setting, and the pulley has no effect for sure anymore when you reset the back line to either more or less bar pressure.

The RED Bar comes with 4 22m lines -of clearly tremendous quality; Each single line has the strength to carry the weight of about seven persons. – and has an elastic power cord near the clam cleat, which is height adjustable and comes with a stopper ball. Choosing for an elastic depower cord should prevent having a long piece of rope dangling around when setting the system in a depowered mode. For example the F-one  bar gave us some tricky moments in similar situations; pulling back the bar after a spin and 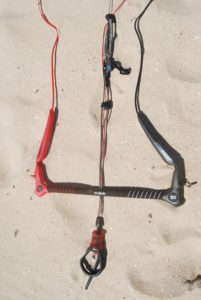 It has a swivel below the bar with a single line safety connected to a power line, long enough to completely open up the kite and get the power totally out. But users must untwist the lines by hand with the swivel after a (kite)loop otherwise there is a chance the safety line will get stuck when used. Being -by the way- exactly the same at this point to a North Quad bar, the swivel doesn’t turn by itself like the Click bar does.

The Roca did have a pretty hard time in our test. We had massive slamming gusting wind during one of our sessions. The Roca did not like that at all. For example swapping it to a North Dice 2017 at this point made it clear the Dice was more stable, although the Dice is already not a very gusty loving kite.  On the other hand the Roca is such a mellow kite, but it just got quite nervous in this situation. 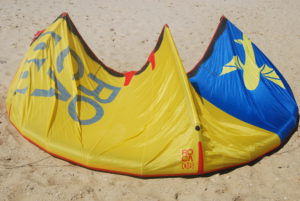 The bar pressure is very low and even on the heavy bar setting, the kite was still with little bar pressure and quite the same as the standard setting.  Its wind range is, especially on the low end side pretty good. And even when being overpowered the Roca will not get you heavily surprised. Therefore the pop and/or power comes, despite its short power/depower bar stroke, quick but quite soft. At this point we got reminded to the behaviour of a F-one Bandit (the Bandit being slightly more aggressive, but still quite friendly). It just tries to treat you nicely. Perfect for beginners or the less aggressive kiters (women?!) but for a freestyle session you will need another kite. Jumping with the Roca is quite easy, although it doesn’t send you right away to the moon (although there is an impressive 23.4m Woo jump height recorded with a Roca 2017) , it has a nice float in the air and is very predictable what you are going to get.

Looping the kite takes an medium to big sized  circle and creates less but steadier power as most other kites. The typical Roca thing is -again- the predictable force you will get. The low bar pressure, the rapid on- off power in a  small bar stroke gives a mixture of a Carbinha FX and that of a F-one Bandit.