Sometimes you see a kite and you think that one can be a good one for me. In other cases you think, nah that cannot be much for me. For the KSP Charger and the Phantom it was for both kites exactly the opposite of what we thought. The Charger, with 5 lines and 3 struts, is much more radical wake style than we ever thought and way above of our -and probably 90% of our readers- level. The two strutted Phantom however, is so much better than any other two strutted kite we have ever tried. It even beats a lot of other kites. And that for a price which is roughly 40% lower than most other kites.

KSP is not (yet) a very familiar brand in the kite industry. It is an Italian brand that has had other kites (like the Strike and the Revolve) in the past years before, but which we have never tested or even heard about them. Ksp also sells wake- and kiteboards, boots, SUP’s, harnesses and wetsuits. 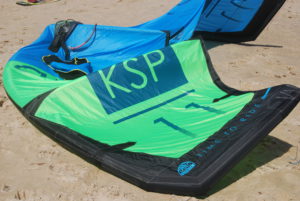 The prices of the kites are relatively low. Compared to other kites like a new F-one Bandit or a Naish Torch they are about 40 to 45% cheaper. But you will have to keep in mind that if you may want to sell them again a KSP kite will be less worth secondhand as those kites. Although they seem priced very attractive there is nothing where money has been saved on. The cloth of the kites for example (2DR Double ripstop) is a regular cloth and most A-brands use it. Both of the kites have big inflates (Boston pump) and an one pump system.  The lines are of very decent quality (23m from the  Dutch Eurocord DHPS-300, also used on the Best RP bar for example).

The bar comes with a decent push-away safety system, a below the bar (hand driven) swivel, plastic covered  of the depower line (without stopper ball) and the safety line with a single line flag out  system. 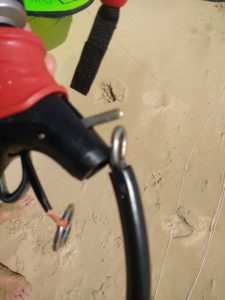 The bridles on Phantom kite (one setting only) have 3 (ring shaped) pulleys and the steering lines can be set at 3 different positions like most other kites. The Phantom has 2 battens in the trailing edge. The Charger comes without bridles (one of the few kites eft without) and just one setting for the back lines.

Basically both kites are very complete and the only very small criticism at this stage we could find is that both kites just have 4 sizes each in their range.

We tested the Phantom and the Charger in two totally different circumstances. in Tarifa (Spain). We started out with a hammering, gusty offshore 30-35 knots Levante and a couple of days later in much less but more stable Poniente wind with 1-2m waves. Both days on a twin tip. 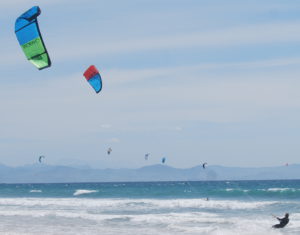 The Charger was quite appealing to us while still lying pumped up on the beach ready to go. But the 3 struts, which normally indicates it will be a do-it-all kite, are quite delusive. The 5 lines and squired tips give away more of its -as stated bj KSP- open C kite behaviour. But even that will not cover it. One of the well known open C designs, the Slingshot RPM, is much more all round as the KSP Charger. The KSP site is quite clear about it; for excessive pop and an amazing slack. Immediate when we started kiting with the Charger we felt like we were such beginners. The amount of slack of the back lines and very low bar pressure in combination with a kite that sits still on its position (or in other words to say it is slow) took seriously about 20 minutes to get used to. We could use a 9m in quite strong wind and depowering the kite made it even harder. The 11m in underpowered conditions had a better low end than you may expect from a C kite.The kite was often behind of what we thought it would be.

Where a North Vegas or a Best GP still can be of good use away from pure wakestyle riding the Charger is as purely wakestyle as it can be. Just like having a big, strong dog; the owner must address it with serious input to get it like it should be going. To be honest our level is not even close to get anything sensible testing out of this kite. Our guess is that most other riders will feel the same way.

Two struts. It started upfront with mixed feelings. After testing the Naish Ride and the Dr Tuba (kites with also just 2 struts) we missed the point to make kites for mainstream use with only 2 struts. The Ride doesn’t even exist any more in 2017 and if 2 struts was an amazing invention we should have seen more of them…and we didn’t. Such kites generally have one problem; their response in mid to higher wind ranges in combination to any bump an jump movements are very disappointing. 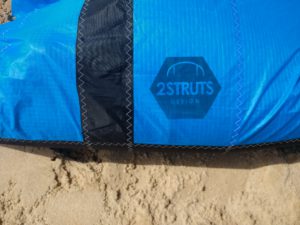 Boy oh boy were we wrong for the Phantom! In gusty strong winds the 7m was very responsive and no significant jellyfishing! And giving exactly the correct, direct pop you may expect going for a jump. Compare the feeling to a F-one Bandit quite as quick, a slightly bigger turning circle but still very small when needed althpough the kite looks quite narrow and long. And another similarity with the Bandit is the easiness and quickness powering or depowering is done. Done in an instant by just pulling or pushing the bar a bit. It comes very close to that of the Bandit, which is known for its ease of doing just this.

Jumps are surprisingly powerful and it is easy to find the Phantoms sweet spot. Hang time is also impressive, although it won’t beat an Edge, Rebel, Evo or Switchblade. But it isn’t far off from those last two and you get a lot of easiness in return. Windrange wise don’t buy the Phantom to get an ultra low wind miracle kite. It hasn’t got a bad low end, but the 2 struts may suggest a light and thus ultimate low wind machine and that isn’t the case. Get it (and keep it) since you will get so much fun out of this kite in any circumstance for relatively little money.

Reaction from KSP on our review

I read your article, and i appreciate your feedback. We are happy because your feedback most positive and impartial. We appreciate the impartial feedback. These give us positive imput to always improve our products. I’ve just to suggest you some points (your free to review or not the article, but i want explain you anyway): – Small kites range: we have just release also 5m size, so now the kite range is made from 5 sizes (before was 4 sizes) – CHARGER: this is pure WAKESTYLE kite (like our description on official website). Have Open-C shape, but work and have same feeling of pure C-kite (like North Vegas for example). Just more low-end and more easy to relunch of pure c-kite, but for all the rest work totally same. For this this kite is liked only from hight level freestyle/wakestyle riders. Just for your info: we are working for a new Open-C 4 lines (3° kite on the collection), that cover the middle from Phantom and Charger Thanks for your feedback and we appreciate your work. All the best! Alessandro