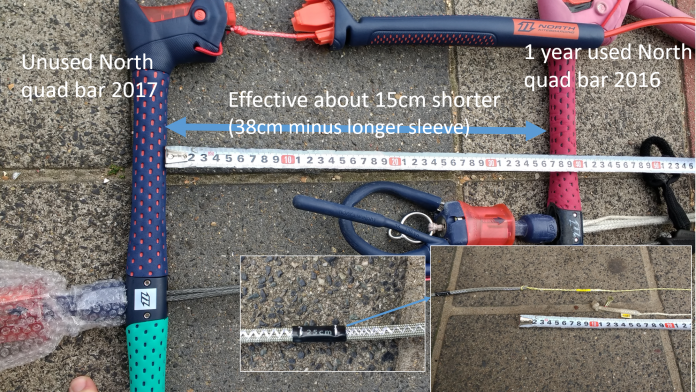 Shrinking? Yes, shrinking. Kite lines get shorter after usage! It seems contra intuitive, because a lot of people think used lines will get stretched, but in fact they get shorter over time. We found differences between used and unused lines of around 15cm, where the used lines got shorter. It may just be the reason your used kite doesn’t feel the same as when you bought it, especially when you just replaced a part of your lines. 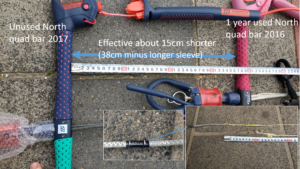 A quick search on internet will show that the statement lines shrink is not new or unknown. The theory behind it quickly gets too technical, but it seems to affect a major part of the kite brands.

We got in touch with shrunken lines when we discovered a 2016 North Quad bar had a damaged line due to rubbing through and against the metal split point (see picture). We thought North had solved its split point issue after the early 2015 mistake. 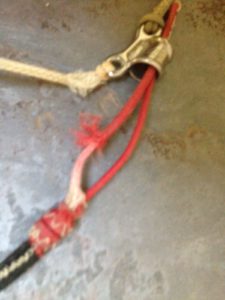 But apparently a year of usage will result in some wear out we didn’t expect. Something to check every now and than if you use a 2016 or 2017 quad bar, but that is not what this article is about. The first thought was of just ordering new front lines, but when we checked the length of the new and old lines they were not the same.

In our case the 22m 2016 North back lines shrunk in one year about 15cm. The front lines about 10cm. It is astonishing, but starts to get a bit more understandable when you realize it is (just) about 1% of the total line length.

We asked North line specialist Aurelien Mierswa about it. His answer confirmed our findings as “all our competitors have shrinking lines“. Without getting to theoretically North came -sort of- up with the cause of the shrinking; “…the line is a woven structure. This woven structure gets loos with the time and use. Water, dirt and sand can get in between the filaments. What happens is that the line gets a bit thicker and this makes the line shrink as well.”

Also Liros GmbH, a German line producent, clearly confirms the shrinking of lines; “Dyneema lines have the negative characteristic to shorten. This refers in kiting mainly to the steering lines, as the front lines are permanently under tension …But the steering lines that can shrink up to 20 centimeters”.

It is being discussed at several forums as well, where we both found sceptical but at the same time a lot of convinced people.

One picture can tell more than a 1000 words; See, next to our pictures, a clear photo from the Australian Seebreeze forum, where shrinking lines are seen from Best, Core and other brands.

Our -bit simplified- explanation; line are pre-stretched and get (a bit) back to it’s pre pre-streched length when used.

There is no need for panic, but what should you do with this information? Well, if you going to replace a line (or two) you can potentially get a problem. Your new lines will be longer than the one you replace. Most brands will sell their lines by only in pairs, which makes sure there is no problem between left and right in most cases, but significant differences in kite flying is still something to worry about. Adding the fact that back and front lines do not typically shrink the same amount, which means over time the angle of your kite can be affected (shorter back lines means stalling is most likely an affect).

So most important message is to check your lines every now and then. Keep in mind that most brands require an equal line length of all lines when the depower is set to maximum (completely open) and the chickenloop against the power. Solving unequal lines is open for debat. Some say stretch (pull) them to make the shorter one’s longer, others prefer to work with (some) pigtails or extensions. Oh and don’t forget your bridles will probably shrink too!