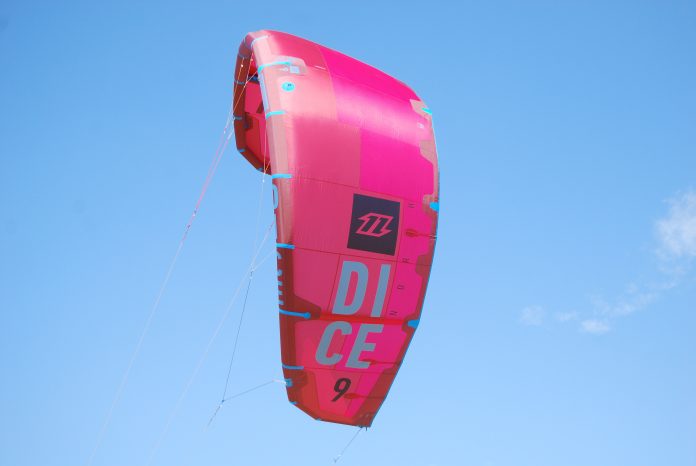 The Dice from 2016 was one of the favourites from all our tests. Its versatility, responsive reaction and easy on-off power control makes it truly the one that makes almost everybody having the most fun on the water. The 2017 version has been changed from the 2016 at some crucial points in te canopy and struts which makes the kite feel a bit more rigid but also a bit less sweet as in 2016. Small changes, but noticeable. A bit better for direct response and aggressive riding style and it asks a bit more input than last year.

The ideas behind the Dice haven’t changed much the last three versions (’15, ’16 and ’17); a relative quick, responsive and multi purpose kite. More kites are aiming to have these aspects, but the Dice (next to for example the Enduro and the FX) are one of the few we think can claim this. It seems to be an attractive marketing term to get kites sold that “do it all”, but be aware the truth is sometimes far off (for example the Slingshot Rally). In this case North description is quite close to what we noticed; …between Freestyle / Wakestyle and Wave riding, which is an attractive quality that appeals to a very wide demographic of kiteboarders. We noticed that riders were moving from the Vegas towards the Dice, mainly due to its Freestyle abilities and overall range of use.

To have the most fun out of it we advice to use the Dice with 22m lines, four and not five lines. A five lines set up is possible but we tried it and it make the Dice really different. Slower and less fun, and as we understood it is optimally designed for the four line set up.

Although it may be one of the kites we really like, we do have some (mostly minor) comments. As always North states, even on the kite, that it should be pumped to 6 Psi. 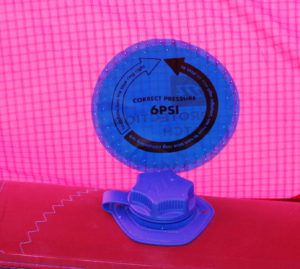 It is too low and nobody stops pumping at this low pressure. Anyway it feels a bit like getting an terrific new car which says on the dashboard “do not drive above 80 km/h”. It is stated for warranty issues, but it is a bit silly.

The typically North valve hasn’t changed from ’16 to ’17. It works, but it just isn’t the one we like most. It requires some turning (both the cap as on the inside) which in combination with sand is not ideal.

What clearly (see the blue cloth in the picture) did change is the support for more stability on the struts. It may just be one of the most clear changes which can be the cause of the difference in feel between ’16 and’17. North also changed the panel lay out a bit.

We have seen some lines come off (mostly the steering lines) due to slipping from the knot. The knots both on the front lines as on the kite are pretty small. We would advice to add a bigger knot both on the bridles and the power lines. And – as we wrote before– be aware when using alternative bars; the Dice requires a high split point bar (around 6m from the bar). Using a low split will influence the performance negatively.

The four line 3 strut Dice has 6 battens (on most sizes, similar to previous versions) and comes with favourite pulleys without any moving parts (pulleys with wheels in them damage the lines, an issue on the F-one Bandit).

A strange move from ’16 to ’17 the standard Quad bar colors have been changed (nothing else really). The dark blue bar part was on the right side in ’16 but in ’17 it moved to the left! Not really handy when you are used to automatically look for this dark blue color when grabbing the bar again after a spin.

From 2017 on you can also choose for a new type of bar. North calls it the Click bar. It is marketed as a game changer, and that is a bit over the top. The system to (de)power is completely new, and the below the bar swivel is so smooth it untwists by itself. Read further details in our review.

We have tested the 2017 version (several sizes) back to back to the 2016 version a couple of times. We even made sure we had a relative new 2016 version, since a well used one could be influenced by the usage. There are small, but distinguish, differences between the two versions. The 2017 one needs more input from the rider, is stiffer in feel, and isn’t any better in its low end. The pop is more aggressive and the kite loops are better. The best word to describe the difference is that the ’16 version feels softer as the ’17 version. The Dice moved a bit more to the Vegas. Don’t forget the Dice is still an easy power on and off machine, which is such a relieve compared to the Vegas which needs lots more work when overpowered and doesn’t release the power as the Dice does. Intermediate to experienced kiters will love the feeling you can handle huge amounts of wind and still be fully in control. In combination with the changes in 2017 from 2016 those people will love the Dice even more since it will get less out of its shape.Most heard reaction on the beach when we tested the 2017 Dice? Wow it really has such a nice shape when it is in the air. 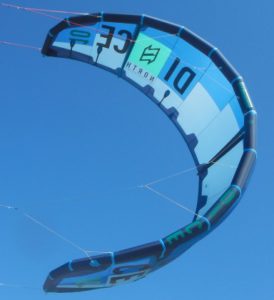 Winning a Woo air time competition with the Dice is more or less out of the question. For that an Ozone Edge or North Rebel is much better, but compared to a Dice they are to be seen as boring kites.

The Dice does boost up in the air brilliant with a boom. So winning it height wise it will depend on the strength of your legs mostly, next to some howling amount of wind.

The downside of this design of the Dice (basically all versions) is that it will tend to stall when a under powered situation is reached quite suddenly compared to other kites. Only way to learn to (unnaturally) react in this situation is to push away the bar. When doing some unhooked tricks (which the Dice really invites you to do!) make sure this stalling doesn’t happen by de-powering just before you make your move. And since the standard Quad bar in this depowered situation often will get its safety line in the way when re-hooking. The new Click bar, where the safety ring cant come down on the chicken loop wouldn’t be such a bad match at all.