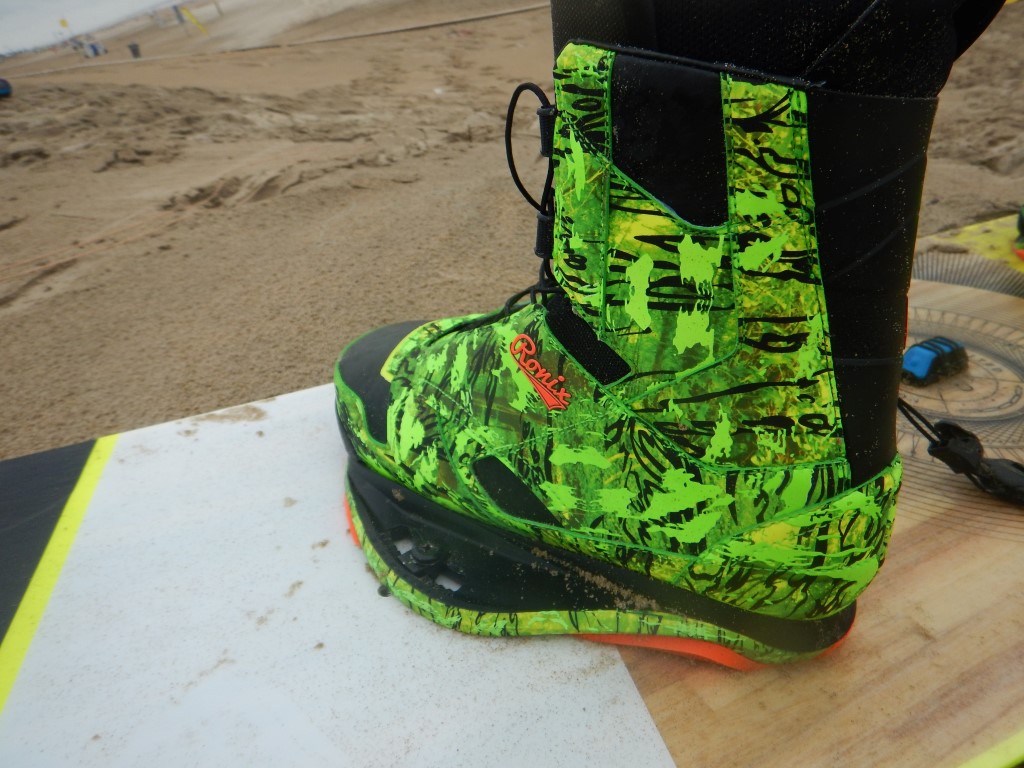 You will remember it when you have seen them. The Ronix Franks 2016 looks are very spectaculair; extremely flashy green. From orange/yellow in 2015 to this acid green, means people will stop for it and point at them 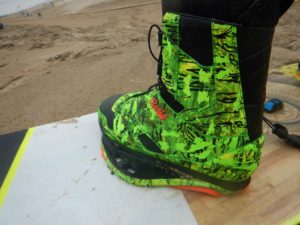 even more. How is the ride on a kite board with these flashy boots? Well before you buy them you need to know one little detail…which leaves a little stain on the pretty expensive Ronix Franks 2016.

We used the 2015 model last year for about half a day. Now we got hold of the 2016 version and rode with them about 25 kite sessions. We used them back to back a few times with the Humanoid Howl 2014  which are closed with Velcro straps (against laces for the Ronix) and are about 150 Euro’s cheaper. And yes the Ronix boots feel awesome when you tie down those laces. 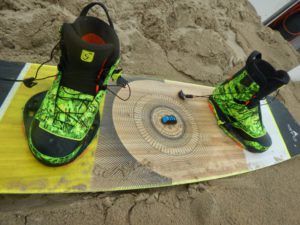 It feels perfect. Better than the humanoid with the Velcro straps, which don’t get things as tight and firm as with laces. The Ronix Franks are also a bit higher and (therefore?) feel more firm and radical. And they are not that much heavier than the Humanoids either. The fix to the board didn’t came loose even a bit once after screwing them on the board. Which is something you do need to check on the Humanoids every now and then. Size wise an EU 43 needs a US 10 on the Ronix and a 10-11 on the Humanoids.

The Franks 2016 come with laces with an updated closing system from those of 2015.

The 2016 laces lock system is updated with an reason. Apparently the 2015 system was pretty hard to get them working. When you finally got them in by pushing a small piece of plastic down, it still didn’t work as they were intended for; they slip. So in 2016 Ronix updated the system. Now it is much easier to get the laces tied down. 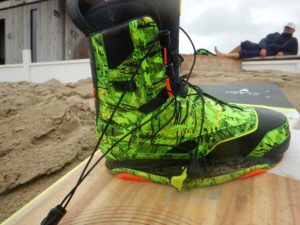 There is a handy storage for the end of the laces (with an plastic “puller” which clips at the side of the boot, just as in 2015). Time to rock and roll! The comfort is pretty high, maybe even too high when after an hour or so there is some bending felt in an area’s where it shouldn’t be. At  the middle part of the boot on the outside just above the ankle. We are not sure how much it bends, but it feels a bit like it is not supposed to happen. Overall the boots do feel fairly steady. 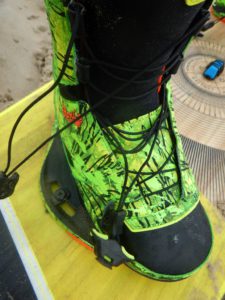 But things changes quickly after the first two or three hard landings…The new lockers on the laces still don’t hold the forces the Ronix boots are getting from kiting. The lace locker al of a sudden doesn’t sit in the middle any

more but slides sideways as one of the 2 laces slipped.

Things drop from a 9 to a 7- and nothing is so disappointing when you try to hit that big ramp (wave) going for your most brutal jump ever and you end up moving in your boot instead. Okay, Ronix is a wake board brand, but still why is a 500+ Euro boot not fitted with something more rigid?

update:  After exactly two months of usage the outside part of both front laces are broken. Far too soon in our view. We solved it by getting new laces, but not from Ronix. Putting the back in is quite a hassle btw. 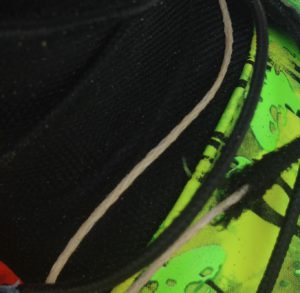 Compare to that the Humanoid Howls start out feeling a bit less tighter, due to the Velcro. But at least they do stay that way and barely get any looser. Does this mean we like the Humanoids more? Well no. The Franks look more brutal and have more potential, but if it is worth the extra 150 Euro’s….? What about strength? It is not easy to test or predic

t how long a boot will last. The Huma
noid Howl lasted 18 months before the inner shoe came loose on its stichting. How long the 2016 Franks will hold is any body’s guess.

The Ronix Franks have a very impressive look and the kite also very well. You feel like a king and it feels very comfortable. You just need to get back to the beach to tighten the laces again a bit too much.