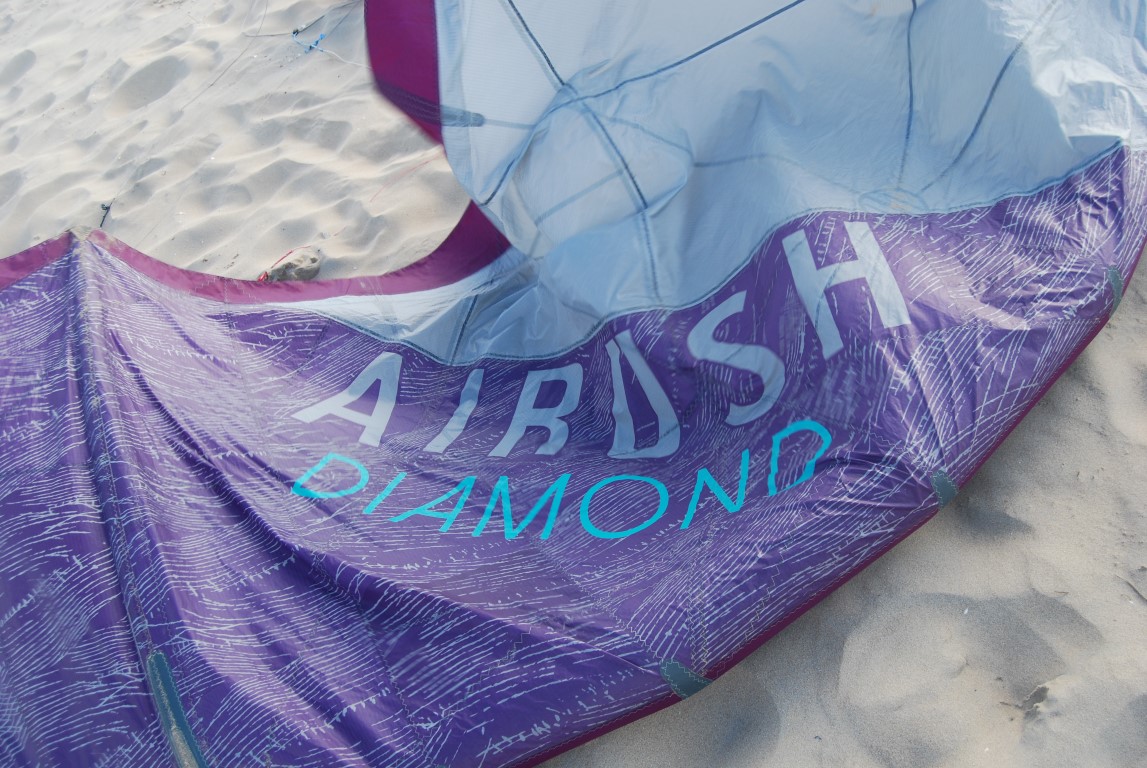 A kite for female’s, designed by the successful professional kiter Bruna Kajiya, which turns out not to be for pussies. Bruna’s Diamond got us a big smile on our face. Not because we had to laugh but out of big respect how Bruna, and other kite chicks, can perform with this (three strutted or should we say three legged) wolf in scheep’s cloth. Pretty fast, responsive in a almost nasty way and a lot of very direct bar pressure, may be even a bit too much for most (older) men. Think Vegas, or Torch as in C-kite and you get a pretty good picture, although her (!) sweet spot is small and not easy to find. The downsized bar is really a disappointment. The power/depower system is out of date and needs an update. 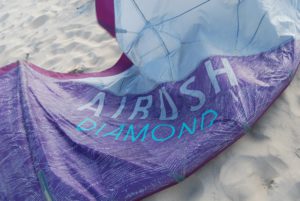 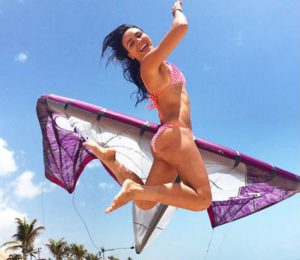 With the looks and feel that the impressive Bruna is the designer of The Diamond  it starts already with an extra bonus point. The diamond 2016 is easily recognisable with its grey and purple colours. The three struts kite has perfect wide inflate and adjustable bridles (low and medium pressure) with 2 pulleys each. Too bad the pulleys have wheels, because that may damage the bridles when they get stuck between the housing and the wheels. 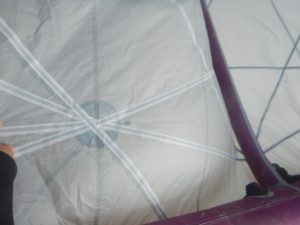 The Diamond, just like the Union, comes with the so called Load frame. It is visible by the lines that run through the canopy and is meant to give the kite a longer live. It is not easy to test if this statement is true. What we did notice is that the 7m kite in brutal conditions (35+ knots of wind) didn’t loose much of her shape, even with only the three struts to support the shape.

To start with the positive aspects of the bar and lines we can mention that Airush  tried to adjust the bar with four 24m lines to the different needs from females to those of the men. There are two differences to the other, standard, Airush bars; first of all the diameter is (5 mm less) smaller which is clearly noticeable when you hold it. Second it has the depower system closer to the rider, which makes the bar throw is a bit shorter. One of our testers is a female of about 1.65m and she wasn’t to impressed with these adaptations. One irritating side affect of the shorter distance from rider to the depower system is that every now and then the blue or red cords gets caught up in your hands while changing grabs on the bar. We seriously wonder how Bruna deal with that while doing all those handle passes in competition? But the real criticism from all riders on the bar focuses on two other things;

First of all the depower system has a couple of problems. It needs quite some (male) effort to change the power it is hard to see on which power setting it is and the biggest issue is the fact it adjustable range is very limited. In fact the picture shows the maximum depower setting, al though it looks like it should be able to depower more, but it stops there.

The second issue has to do with the safety. Not the release system itself, that works fine (we even needed it at 35 knots when a launch went completely wrong). No, it is the ability to untangle the depower line. The function is there, but it has been made so small and unfriendly that even male hands cannot turn it. Since there is no swivel, the front lines will tangle each time you make the same loop. Do this more than three of four times and your safety is at risk since the front lines will not untangle when activating the safety release. If  we were Airush, we would be more careful on our precious kite girls….and change both the depower and untangle system. It shouldn’t be too difficult (and we understood they didn’t change anything on it to the 2017 versions…).

We tested the diamond in a great variety of conditions. We also changed the bridle settings a couple of times.

The Diamond is not your average kite, that is for sure. It isn’t easy to describe, but when you realise before you use the kite that is has a C-kite/freestyle aim(and not so much a female kite) the surprise on how the kite feels, is much less.

The most outstanding feel is not difficult to detect; the bar pressure.  It is powered up a bit on the heavy side, Although it has 24m lines, the kite, even with the bridles on low bar pressure and the steering lines also on low/fast, it is still quite heavy on the arms. It definitely -on this setting ánd 24m lines- still has incredible amount of feel with the kite, without a doubt. We wondered to whom would suit the more heavily settings? We tried the medium bridle settings. To our surprise, unlike some other kites like the Bull Zigzag or the Slingshot RPM, it did not affect the bar pressure and the kite performance dramatically. But the Diamond became more at ease, parked in the edge of the window and it turned a bit more rough or Slingshot RPM like. But the look of the shape of the kite turned  incredible ugly. The low bridle and fast steering line was everybody’s favourite. But this settings had some issues though. Pulling out some freestyle moves (where the kite is made for!) under-powered,  making unhooked moves the Diamond over sheets and stalls way to quick on this setting. 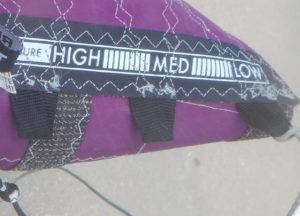 It is quite difficult to feel the best setting of the depower, and it makes you wanna reset the strap over and over
again until you realise your legs just need to handle more pressure (as we found with the North Vegas) than most other kites. It is not an easy on/off kite kite like an F-one Bandit or a Dice. No, pushing away the bar doesn’t release much power. You will get bonus burning energy though, every time for using the Diamond.

Finding its ultimate pop moment is somewhere between okay and difficult. It just has some much of a grunt feeling that you need some time to adjust to it. When using the 7m Diamond at 30+ winds at an younger, aggressive and fearless guy  or girl it will definitely impress the audience. It even wouldn’t be strange to use it at an King (or Queen!) of the air contest, that kind of aggressiveness (or lack of depower) the Diamond will give in big winds. 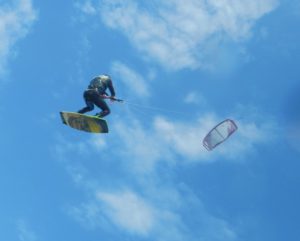 So who would suit the Diamond ideally? We have to be honest that it cracked our mind a bit. At least she (or he?) certainly knows what she wants. Probably an athletic, stronger person that want’s to be in an performing competition with an stylish purple kite. Anybody else entering an Airush shop and looking for an new kite would be way better of with an Airush Union.

After testing the Diamond we realise that this small (and cute!) Brazilian chick doing spectaculair unhooked tricks no girl has ever done before, makes it even more admirable how she can pull this off. But then again on of the biggest competitor of Bruna is Karolina Winskowska who uses Slingshot Fuel, which also isn’t a typical friendly, female kite either.