Stability with a superb wind range that is what the Switchblade is all about. The all-round Cabrinha Switchblade is described as a crossover, high performance and versatile kite. 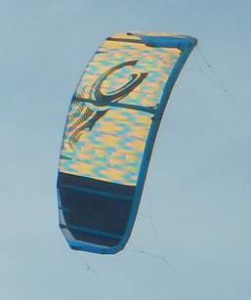 Cabrinha has more than seven different type of kites. But how the kite should be placed between the other six different kites it is not easy to judge. Good thing 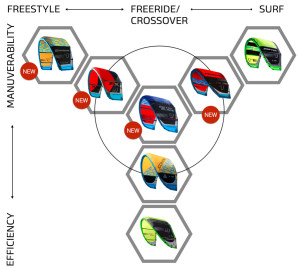 Cabrinha has made an overview of their kites. The Switchblade (being right in the middle) should be the more efficient kite but less responding than the FX (which we tested and liked very much) and capable of being good for just about every discipline.

The Switchblade comes with the apparent features all kites should have; one pump, a nice one pump system with the best big inflate we know (similar as Best and Ozone), a twist-able depower line completely covered with plastic so wear out is reduced to a minimum. The Switchblade comes with 5 struts, is available in 3 different colors and has no battens. The complete package bar, lines, kite and pump) will get close to 1900,- Euro, which is at the high end of the market.

We used the 9m in several conditions, both in gusty Levante as in steady poniente wind with waves up to 3 meters in Tarifa, Spain. Riding it with twintips. The first thing that we noticed is the stability. The five struts in combination with the shape of the kite feels very firm. On the water the kite is at ease and almost impossible to get it 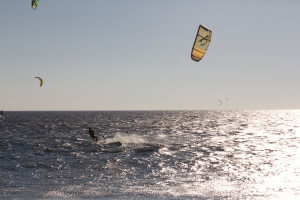 stalled in low winds. Jumping with a pretty predictable medium pop is great. It isn’t as a mega air timer as the Ozone Edge, but is comes pretty close. So being at the top of the Woo leader board will not be impossible (as we know a massive 18.0 has been jumped with the Switchblade 2016). The wind range is also impressive and much better than most other kites.

For the more experienced kiter who wants more than just jumping the Switchblade is a bit too slow and not responsive enough. When kite looping the Switchblade needs a big amount of space since it make a huge loop. But the kite will stay nicely into its shape and won’t show any deformation. Making some freestyle moves is also not a problem (but needs a large hook on the leash), since the kite will stay at the same spot when making any new school tricks. It even has a sort of a dead moment which for freestyle moves is ideal. 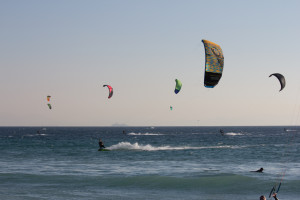 We could use the 2016 Switchblade side by side with a North Dice 2016 and a F-one Bandit 2016, all nine meters. There where some very clear differences between those kites. The Switchblade is the best of the three dealing with gusty conditions. It also has the best low end (although the Dice came close) of the three. And it also jumps a fraction higher than the other two. On the responsiveness it is performing the least of the three though.

We would say the performance of the Cabrinha Switchblade comes closest to the North Evo, although the Evo has a smaller and quicker turn which is better for wave riding and is less at doing freestyle moves than the Swithcblade. The cause of the difference is not the kites itself, but the due to the high split point of the front lines of the bar used on the North Evo. 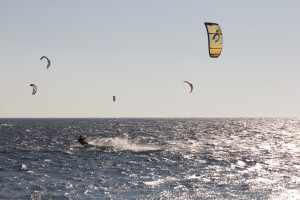 The bar is well protected at the ends so it will not damage your (wave) board for instance. The split point of the front lines couldn’t be lower, and the safety system will get totally flag out the kite at one front line -as all four line systems should have-. 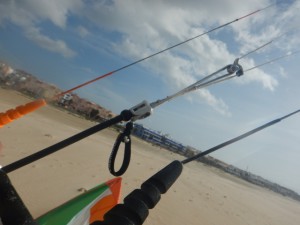 We also liked the new depower system more than the old one since it is a bit smoother(the old strap version is also still available). But some test riders still think the system is too rough and needs a lot of effort to re-adjust the power. The plastic on the depower rope is quite big comapred to the hole in the bar. This makes the bar go up and down while trying to pull one end of the bar quite tough. The F-one depower rope has a similar plastic on the depower rope, but works smoother than the Cabrinha one.

A bigger problem of the system is that the depower system is too far away from the rider. Related to this problem is that the bar goes up far when letting go and it has no stopper ball. A shorter person (roughly under 1.70m) won’t get hold of the bar any more since it will be too far away.