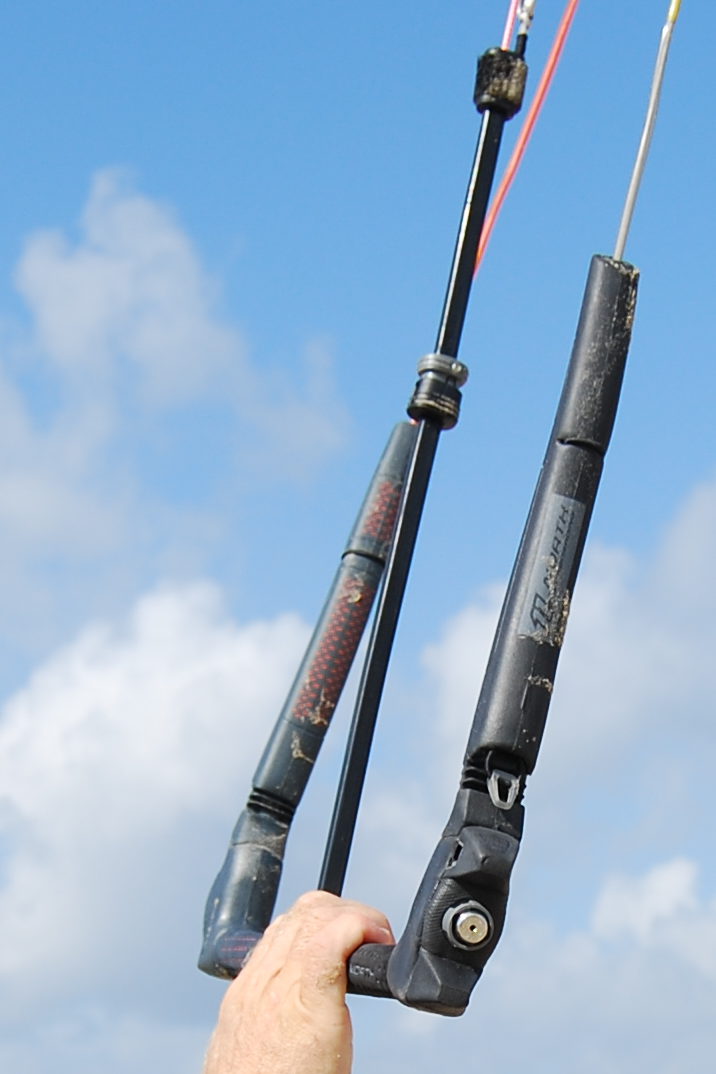 The introduction of the new Click bar can be compared to the time when new cars got a remote control for opening and starting a car. Handy, but not necessary to get from A to B. So a game changer? No, of course not. You will not fly higher, ride harder or get more pop. But it is a refinement of the bar.

Compared to the standard bars of North, it is more than just the way you power/depower your kite. You may even safe money -although it costs 160 Euro’s more than the Quad bar- on the long run. For sure it is safer and more friendly to use. If sand will ruin the (de)power system, is hard to tell. It doesn’t look like it, but at least make sure you register your Click bar to get to the extra 6 month of warranty. Better be (18 months) safe than sorry, 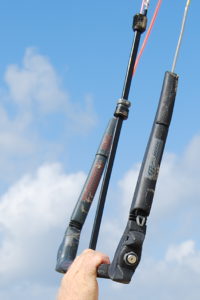 We have a lot of experience using the North Quad bar (’15 and ’16). They are one of the best bars out there, but  still some (mainly wear out) issues can be addressed; The 2015 version originally came with a certain split point case which damaged the lines. North provided an upgrade, but didn’t provide a new front line. The upgrade kit also isn’t ideal, since the two provided metal rings rub against an unprotected line. 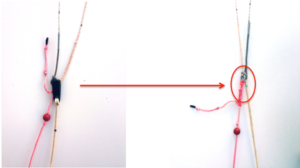 By the way the message on this upgrade was send out by email to people who registered their bar. Yes, also the bar (unique identification number is on the black plastic part where the depower strap is hanging at) can be registered at North. It will also get you 18 instead of 12 months warranty.

The standard quad 22m bar is Clickbar is 4cm wider. But if  you compare attachment points of lines it looks pretty much the same.

Both the 2015 and 2016 bar suffer from wear out on the depower line. Replacement of about one or two per year (30 Euro)  is quite common. And not to forget the red safety line (also 30 Euro) and the center part needs replacement about once a year (8 Euro). So in theory the Click bar’s 160 Euro’s extra costs are roughly earned back in 2 years! Not to mention the wasted hours to replace those parts. But some experienced users of the Quad bar warned us that preventive replacing of the center part sooner would prevent changing the depower and safety line so frequent.

Edit after 2 months of using;

We didn’t realise before we get 2m extensions for free on the Click bar to choose either for 22 or 24m riding. Which isn’t the case with the normal Quad Bar. Another feature which isn’t possible on the standard bar is the possiblity to ride the Click br with a low V. Just get the left front line out of the plastic ring and you can use the Click bar on kites which need a low V (split point front lines split for the Dice and the Neo at around 6m from the bar).

Most obvious question on the Click bar is on its durability. The moving parts inside the bar will wear out really quickly if sand would get in touch with them. So the idea is that the system is so tight it won’t let any sand come inside. North claims -as we were explained orally- it has been using the Click bar system for a couple of years without any issues. The future will tell if they are right. For the moment, after testing it one day, we got the feeling the system is indeed sand proof.

At some point (probably years) however the lines need to be replaced. Our guess is that getting the left line al the way through the Click bar will be a hell of a job. But we know the lines of North, developed closely in cooperation with Teufelberger are from a very respectable quality and normally don’t need frequent replacement (we guess roughly about every 3 or 4 years). Another nice trick from the Click bar is that it has a way of changing the height of the split point of the front lines (for example the split on the Vegas with the five line set-up is higher). Main tip from our side by the way is to enlarge the knots, both on the steering lines as on the bridles. We have seen slipping (mostly of the steering lines) in quite some occasions.

Don’t forget to wash the inside of the bar with fresh water by opening the ends of the bar (which is pretty hard to do).

The new (de)power system is adjusted on the right side of the bar. It simply needs a turn to get more power and a press on the button for less power. On the bar a red indicator shows you where it is at. It takes about 3 minutes to get used to it, so it is pretty easy. Most happy on this new bar is our female tester. She can now power her kite without help, which was a bit of a struggle on her own on the traditional Quad bar.

Next to less wear out, there are a couple of functional differences which should get you buying the Click bar instead of the Quad one. Not only the way you depower but also re-hooking after a unhooked move is now easier.  This is because the suicide mode has been rearranged slightly.

The leash now stays connected to a metal ring which cannot come down any more on the chicken loop. This is quite a relief compared to the Quad bar, where the red safety line got in the way when re-hooking, especially when the kite is depowered with little tension
on the red safety line.

Another -unique- feature is the way the depower line turns around it axis and untangles the safety line automatically.
We never saw an swivel that actually turns by it self all the time. The below the bar swiffel on the Quad bar needs manual adjustment, but the one of the Click bar turns by itself. This is constructed quite simply due to squared shaped plastic depower line. Simple but very effective on having the ultimate safe bar. Too bad the stopper ball isn’t really one that works on the fly anymore. You need a lot more force (down) to get it going up again, it gets stuck pretty firmly. But on the other hand we know the one of the Quad bar (which one that works on the fly) stops functioning after about 20 sessions.

Most features of the Click bar in this review is compared to the alternative Quad bar from North. Of course some  features are also present on bars from other brands. But- as we wrote before– be aware when using alternative bars; All North kites require a high split point bar (around 6m from the bar). Using a low split (which a lot of other brand have) will influence the performance negatively.