We Test Kites
Home Other An eye for an eye

You don´t know what you got until it´s gone. That applies to many things in live but especially to our eyes. They make us see how beautiful the world can be and having bad vision and ugly eyes from kitesurfing is not what you want. And it may come as a surprise to many of us but kitesurfing and surfing in general can have a huge impact on your vision. Very scary but luckily it’s reversible with surgery and even better: it’s preventable.

Many surfers in colder climates (like ours) are aware of the so called surfer’s ear where irritation from cold wind and water exposure causes the bone surrounding the ear canal to develop lumps of new bony growth which constrict the ear canal. The surfer’s eye or in medical terms Pterygium (speak out is terygium) is less known but in someways based on the same principle.

We give our eyes a hard time on the water and the beach with salt water, wind (both makes your eye dry) and irritation from the sun. And let’s not forget about the sand in stormy conditions. Especially salt water surfers are used to have red eyes after a good session. That is usually gone the next day. To my surprise one day my eyes did not return back to normal anymore. Not after two days, a week and even longer. I started to notice that something was different around the time of the first lock down due to Covid-19 so it took a while before I was able to get some medical advice. 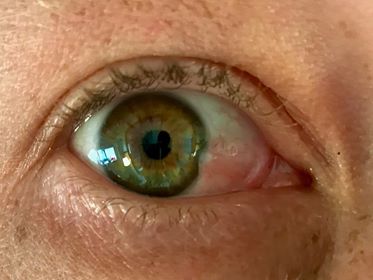 After 6 weeks my eyes were still red and I still had the feeling of sand in my eye. After 2 months of waiting I was finally able to see an ophthalmologist in the hospital. She ran a few tests on my eyes and did some examinations with a slit lamp before she came to the conclusion that this was a Pterygium. And lucky me: I have one in both eyes. That said she immediately asked if I was an outdoors person! I told her all about my outside hobbies including kitesurfing. She told me that this Pterygium is also called a surfer eye because surfers in general spend a lot of time in conditions that are a good breading ground for a Pterygium. Wind, solar radiation, salt water and sand will dry out and irritate the eyeball which makes it very vulnerable for a pterygium (actually any person who spends a lot of time outdoors can get this. Golfers, fisherman and -woman, long distance runners etc.). The doctor explained that it’s like the callus on your hands that pops up there where there has been a lot of friction over a long time. Like from example the kite bar. There you will develop an extra layer of callus.

Studies show that it is not only the equator area’s where an increased percentile of persons with Pterygium are present. 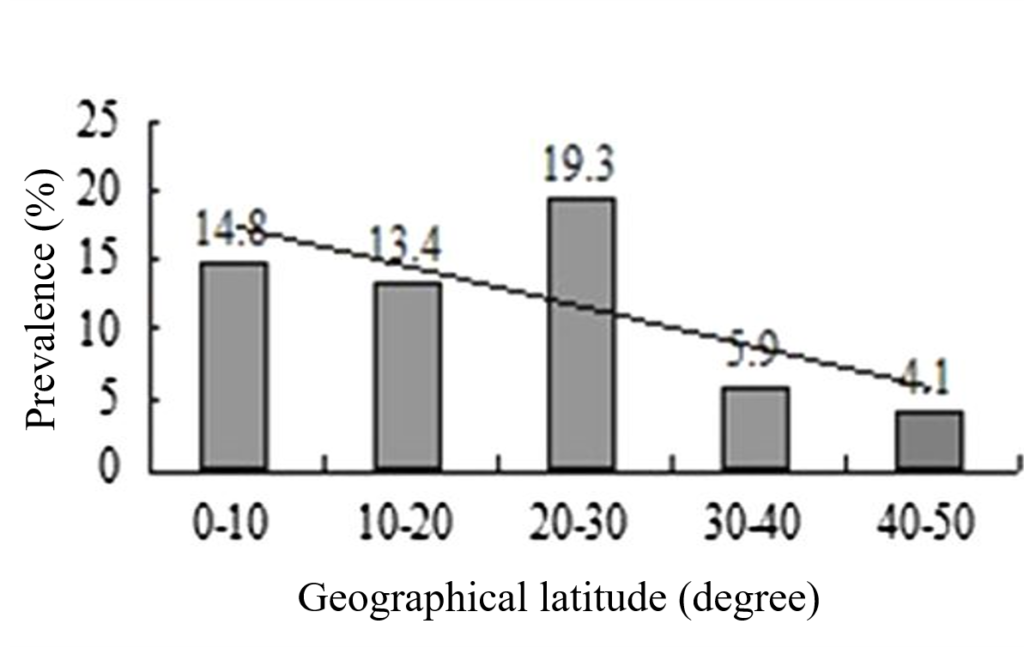 So is there no need to worry if you are in middle of Europe (far away from the 30 degree latitude as Tarifa – is already at the 36 degree latitude)? Certainly not. As the statistics show it is much more about how much you are outdoors.

If we consider ourselves ‘surfers’ and if we have to believe this study we are -after the fishermen- the highest rated risk group. Scary! And if I look around me there are not a lot of people wearing sunglasses.

What to expect when you get a surf eye?

A Pterygium is a benign (non-cancerous) growth, but they can permanently disfigure the eye. They also can cause discomfort and blurry vision. They usually start on the white part of the eye near the nose and can grow over your cornea. The further they grow the more they impact your vision. By the time they grow over the cornea your doctor probably will remove it with surgery. Before this stage most doctors won’t touch it and will send you away with the advice to protect your eyes even when the sun does not shine, wash them with lukewarm water after surfing and give you some lubrication drops or will put you on steroids for a while and give you a thicker gel for the night. Most doctors are not really interested in the fact that you look wasted everyday. Bloodshot irritated eyes 24/7 will be your new normal when you are diagnosed with a Pterygium.

When they will finally do surgery they will cut the Pterygium out and transplant some eye white from under your eyelids on the affected area. They need you to be awake during this surgery because it’s easier for them if you can move your eyes when they operate. Most doctors see it as a small invasion but to me it sounded horrible. There are a lot of methods to operate. Some doctors still use stitches while others use glue. They say the stitches leave more marks than the glue. Also the chance that you get it back is quite high. It depends on the method they use to remove it how high the recurrence rate will be.

A bit of good news is coming from Australia. A study for a new type of droplets to treat (and even cure?) a surfer’s eye has been performed that could have the potential to replace current surgical methods.

But even better than surgery or eye drops is to be aware that a surfer’s eye is not a joke and that it also occurs in so called colder climates as it’s not only due to the sun. The best way to prevent a surfer’s eye is with the right protection.

Obviously sunglasses are a solution. But they do have their down sides. First of all most of them don’t really look cool. Bigger problem can be that they either fog up on the inside, have water droplets or block you (outer) eye sight some how. The choices -colour and brightness of the glasses, polarised or not and several coatings options- are overwhelming. Most of the time when you really need sunglasses (clear sky) a class categorie 3 or 4 UV protection is advisable. But what to do when it is cloudy is a much more difficult question. For those situations lenses with a higher Visible Light Transmission are advisable.

What about protection from contact lenses? There are plenty of options to protect your cornea with lenses. But what is needed is protection of the tissue around -the white of the eye (sclera)-. something relatively unknown is a so called scleral lens.

It is much larger compared to normal lenses and theoretically is a solution to protect your eyes from UV. Theoretically it sounds like a possible solution as Reinier Stortelder from Eaglet Eye b.v. explains. “If you go to an optical store you will be presented with two options; hard or soft lenses . However, a third option is often forgotten, the scleral lens. This is a shortcoming because it is actually the best option. The chance that a well-adjusted scleral lens will fail is very small… Adjustment is an expertise that is only available at a limited amount of optical stores. Unfortunately, there is little attention for this special lens due to the complex fitting process.”

However a complete different answer was given by several other manufacturers, the Dutch Cornea Patient Association (HPV) and the working group Cornea from the The Dutch Oogheelkundig Gezelschap which is the scientific professional association of ophthalmologists in the Netherlands.

They have been very clear on the use of a scleral lens while kiting. ” Do not swim with contact lenses, not even with scleral lenses. I would therefore never recommend using a scleral lens to prevent pterygia. Scleral lens is not intended for that, extremely expensive and not proven to my knowledge that it prevents pterygium formation. So don’t. I would say.”

On top of that my own doctor pointed out any lens will be making things worse since they block the oxygen and will make my eyes even dryer. Not to mention it isn’t easy to put them in with a pinguecula or a pterygium.

We tried a couple of different glasses.

The 90 Euro Lip Surge with ‘smoke’ lenses- VLT of 10% -. The frame has holes to overcome the inside fog which does work fine. Visibility is good but the water droplets can stay on the glasses after a crash. The frame of the Surge is a good match for people with a more narrow shaped face. As the Lip Typhoon is a better one for people with a wider one.

The 185 Euro Lip Typhoon; Has a ‘PC and PA polarized lenses by ZEISS’ -brown lenses 10% VLT- with extra Tri-Pel coating compared to the Surge. It means water droplets will slide off better. It does work but after a real hard crash the lenses need some time to give clear vision again. It seems to take more time when the wind is not so strong or when the temperature is not that high.

The Lip Surge and the Lip Typhoon both have an 8 base curve radius lenses for excellent peripheral vision. Which results in less blocked sights at the edge of your view. The glasses feel really light and comfortable thanks to the rubber frame inside.

After trying different glasses and past the struggle that I actually had to wear glasses on the water this model seems best for me. Therefore I also got an extra set of (prototypes) grey photochromic lenses to wear in winter time to protect the eyes against direct wind, sand ans UV-rays. These have a VLT 19% which means they are ideal for cloudy days. The inner side of the lens surface has been coated with a special anti-fog coat while the surface of the outer lens has an oleophobic and a hydrophobic coating to repel water. They seem to work perfect on colder cloudy days but since we have an extremely mild autumn and winter now I haven’t been able to test the glasses in really cold weather. I’m really curious if the lenses will fog up then. It is also possible to get these glasses with prescription lenses.

The 30 Euro Jobe Knox glasses – VLT unknown. The side view is partly blocked which makes it more difficult to spot others. The fit is not really comfortable and the water droplets don´t come off easily.

The 40 Euro Seaspec Classic Crystal Specs glasses – VLT unknown. Designed with non-polarized lenses for cloudy days. I did not dare to try this one on the water as the frame felt really uncomfortable around my nose. It didn´t feel save to make a proper crash with this one as it already cutted in the skin around my nose while fitting it in the living room.

ABOUT US
We Test Kites, Independent testing of kites and kiteboards
Contact us: dave@wetestkites.com
FOLLOW US
© Copyright 2019 - We Test Kites
We use cookies to ensure that we give you the best experience on our website. If you continue to use this site we will assume that you are happy with it.YesNoPrivacy policy