July 2020 we finally performed our stress test on six different major brands of harness hooks on a test bench. Although the test was done with a lot op preparations and took a lot of time, effort and discussions with experts this test isn’t a direct reflection of real usage. Far from. There are a lot of assumptions to be made to draw any solid conclusions from it. That is why we wrote this extended article on the test method. We still believe the outcome has a certain value. It contains a lot of -very interesting but – technical details. Just interested in the results? We made a separate results post without all the explanatory assumptions.

Our bench test. Who is in it?

Six major brands replied and agreed to cooperate in an independent test. Ride Engine was the first to respond and right away explained also their way of testing. Manera, Prolimit, Brunotti and Mystic were less open on their testing protocols. Dakine was declined on our request to participate in an independent test. RRD didn’t get back to us on our requests to participate.

Ion however had the most extensive testing results ready when we asked about them. We learned a lot from the testing reports. Most striking point is that all of the examples were not much different in their set up. They all are based on a static step-by-step increased pulling forces. Sometimes -like Ion- in different angles.

After discussing and planning the aim of our test (which took 4 months!) we got the unused hooks. Mystic was so kind to lend us their test bench. Which we tweaked a bit to get a more side ways pull on the clips.

Note: after discussing the results with Ion it became clear they are moving on to a more realistic dynamic test. They also explained that most of our examples with problems are part of a re-call on previous versions. We tested a new one.

Each hook has been undergoing the same test -which had 4 separate stages- as far as possible. The clips at the end of the spreader have been attached to the bench in a slight sideways angle (22-25° angle) to come as close as a real person would wear it. As is explained in the scheme below.

Smaller hooks have been positioned slightly further from away the bench. As longer ones have been attached closer backwards to the bench to keep similar pulling angles for all different sized hooks. Everything to make the test as fair (i.e. comparable) as possible.

The bench we used could measure the force up to (a little above) 600 kg. If 600 is really 600 is not the most interesting question. Since we did not change any of the settings on the device all hooks have had similar forces.

To test its accuracy we did compared a person’s weight on a weighing scale to the amount the device would read hanging from the ceiling. Both were within 2 kg’s at his 90 kg reading.

The main critical question on our test set up is to what extend such high -but slow and static- pulling force is comparable to reality. Most of the experts come up with numbers for the most extreme reality for a harness that barely exceed the 300 to 400 kg range (only line and bar specialist Evan Kruger got us a hunch). So what made us go higher? Well simply because not much happened on most of the harnesses up until the 300 Kg limit. Even above that some harnesses where not very impressed. The other reason we think it isn’t so bad to compare harnesses so far above their normal usage is the assumption that a few pulls on a really high level equals some how the stress a harness gets from a lesser amount but on a much higher frequency and in much shorter time frame per pull (nanoseconds probably).

But there is a catch on that assumption. No matter how brutally we abused the hooks none of them actually did break from the spreader.

In the graph below the data is shown from the amount of hooks or spreaders with an issue. We have verified the year it was bought (older than 2018 we did not include), the name of the person, a picture and the description of the issue including how it happened.

It is probably quite a representative reflection of the numbers among the brands. But we have little information on the market shares and the total amount of harnesses sold. Some guesses; unassumingly we probably found 20% of all the issues and if we assume there are  1.500.000 kiters who replace their harness on average each 10th year (from which we cover roughly 2). That would mean 365 issues on 300.000 harnesses sold. Which comes down to a total of 0.1% issues. Ion, Mystic an Ride Engine are probably among the bigger players. If they would have a 20% market share each the numbers of issues per brand would be: 0.06% for Ion, 0.02% for Ride Engine and 0.01% for Mystic. Which means a vast majority of the harnesses are used for years without any problem.

Most of the 73 users with an issue on their harness reported to us are broken hooks at the weld or the fuse. So if didn’t break any of them at 600kg it would mean the static force isn’t the biggest problem to deal with for the hooks. So the assumption we made isn’t backed up with a lot of examples.

For the bending issues -mostly reported on the Ride Engine spreader bar- it does come pretty close to what we saw in our test. Basically what we have seen is that the testing protocols for breakage should be improved in the future. A very frequent (thousands of cycles probably) ‘dynamic testing’  and shorter time interval pulling would be a much more realistic test. We also assume bending is a bad thing. Maybe we are way off. But let the industry come up with thorough and clear explanations. As there is very little of that now. So up until that point we belief our test has enough value to come up with a ranking between the six different harnesses.

Our test had 4 stages. On each stage we measured the width of the spreader and the distance of the hook to the spreader. After a certain -higher- load we measured again at zero pull. The data while on a certain load tell us the temporary effects. While the data at no load after it had taken the pulling load are read as permanent changes.

If a temporary effect is as bad as permanent one is hard to say. A temporary reaction could be seen as something how the hook absorbs a peak load (so ‘positive’). But it also could be indicating that the metal in the hook is suffering from a fatigue sooner than one that has any (or less) temporary changes (so ‘negative’). A permanent change sounds much more like the hook has been damaged. But all the hooks only showed permanent changes above 350 kg pulls. We decided to judge both the temporary and permanent effects. We also judged how the clips looked after the test and how the harnesses still could be used after all tests had been finished. In the end we scored for each hooks on 6 items a “+”, “0” or “-” to come to a ranking list. 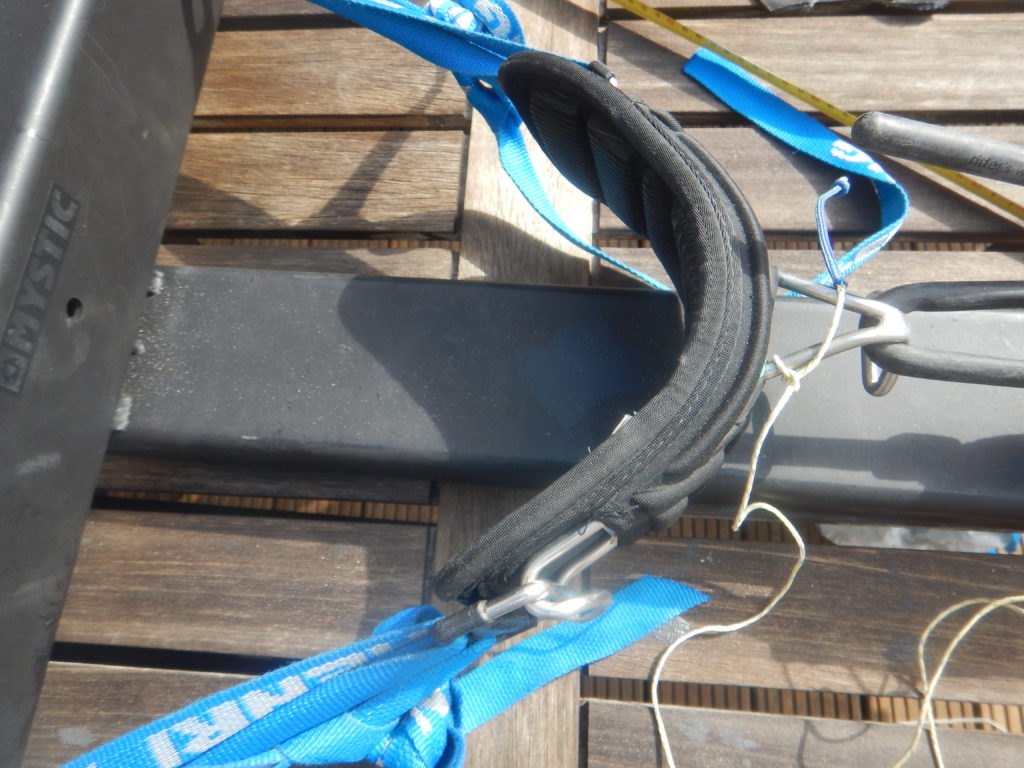 Stage 2: Pulling on the lower side of the clips.

Stage 3: Pulling on the lower side of the clips while one side is shorter (skewed)

Stage 4: Only connected to one clip