We Test Kites
Home Boots tests Slingshot 2019 KTV; the love for the gummy 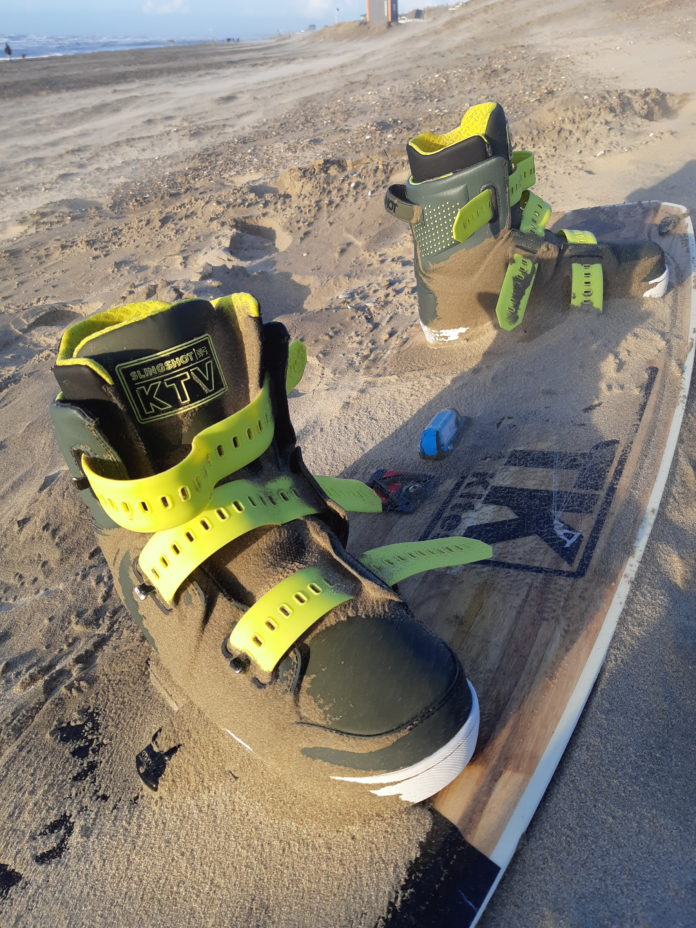 Choosing which boots to ride means you going to have to consider some boot specific issues. A major one is how long they last. And we mean that both ways; how long before they wear out -often much sooner as straps- and how quickly you need to get back to the beach to tighten them. The Slingshot gummy strap are a small but smart invention. When set they are fixed and stay like that for the whole session. A relief compared to any alternative with laces or Velcro. The KTV’s seem also stronger over some boots we tested before but the downside is that they are also a bit more heavy. 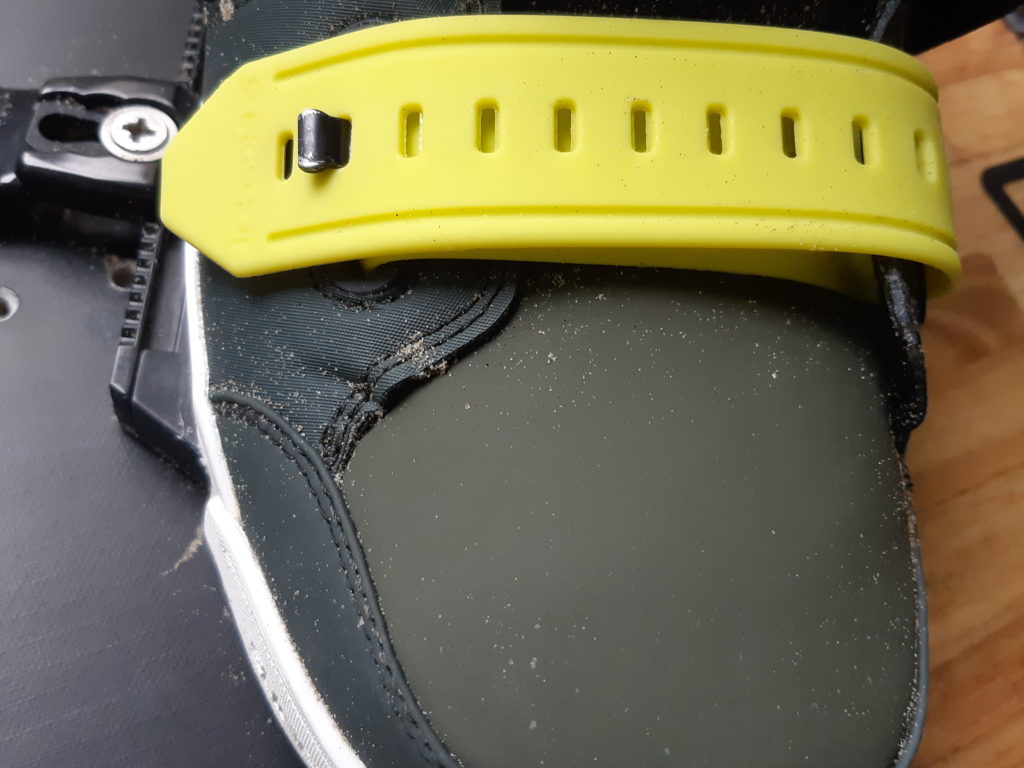 That durability is an serious issue for boots came to light when we tested the Ronix Frank boots. It just take a few months -and we even know of complete break down of the boot within one month- to realize the end of the lifetime is already in sight. Laces break (or break the holes where they run through. The boot itself around the lace connections are next. And that is just the beginning of the end. And as soon as you mention the word ‘kite’ Ronix waves all warranty claims. So much for the most comfortable boots. 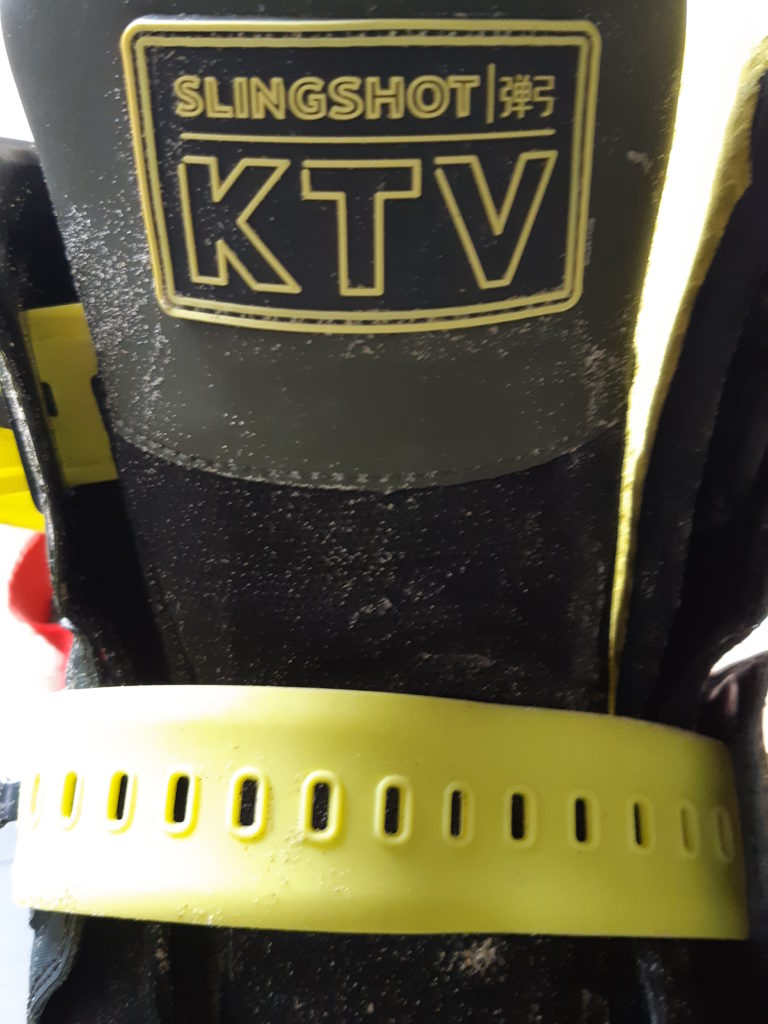 Humanoid boots -like the (quite low) Howl and Odyssey, last a bit longer over the Ronix ones. But they have some specific issues too. The Velcro wears out and starts to open up more and more frequently when it wears. Meaning going back to the beach to tighten them -although less over laces-. Re-tighten them every now and then is something you start to think is normal. But when you do want to fix them it turns out a replacement of the lower Velcro strap is virtually impossible.. 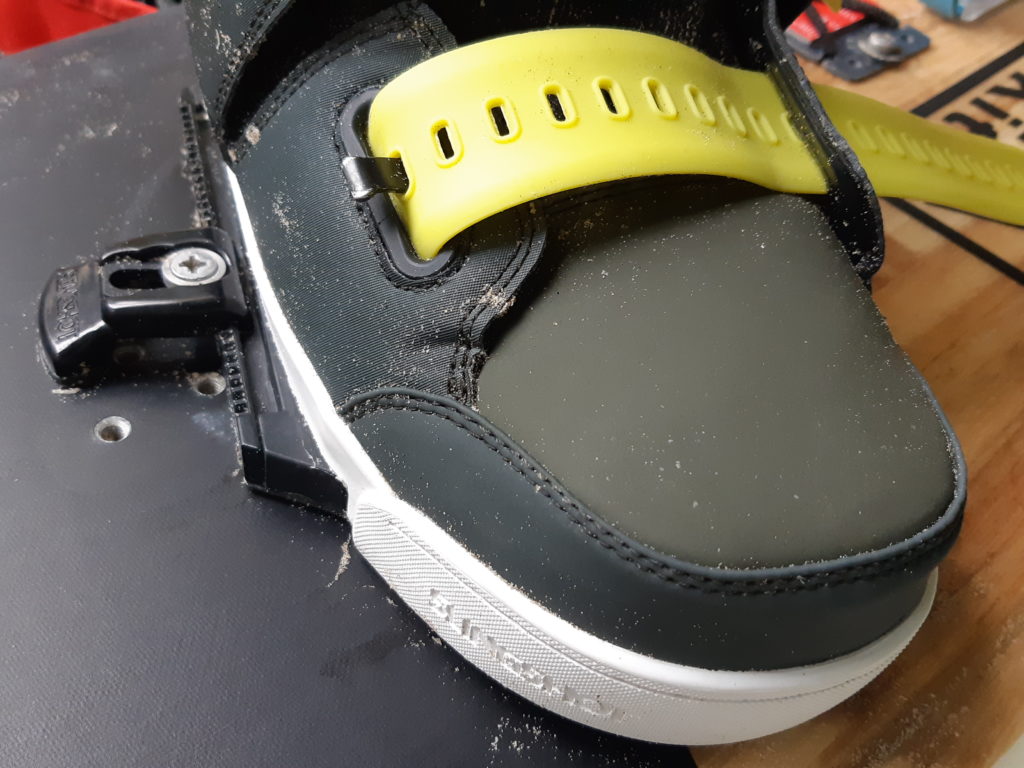 Until you get into the Slingshot KTV boots with a third option: the gummy straps. Fixed means fixed ánd are click-and-go. What a relief! You really set them once and only touch the straps again when you are done with the session. Of course these gummy straps also suffer from wear in the end. But Slingshots adds a full extra package of gummy straps. So if you are repelled by the bright yellow- you get the other six in a more modest black version – worth roughly 40 Euro’s.

Is there room for improvement fot the KTV’s? We had to look very hard but yes we found a part in the connection (see the red arrow in the picture) that is lost very easily. Some glue could probably prevent losing them.

It sounds logic but as we experienced with some other brands (KSP and Airush) is actually not so logic that the Slingshot, Ronix and Humanoid sizes stated are all correct.

The Slingshot KTV need a sessions or two to get it shaped correctly to your feet. Particularly in the calf area the first session is a bit painful. But don’t worry after a few sessions this will be gone. What won’t go away is that the KTV’s are more heavy compared to the Ronix and certainly the Humanoid Howl (2.8 versus 2 kg’s). The KTV doesn’t get it strength from nowhere of course. No sign of wear after 30 hours kiting in very extreme conditions.