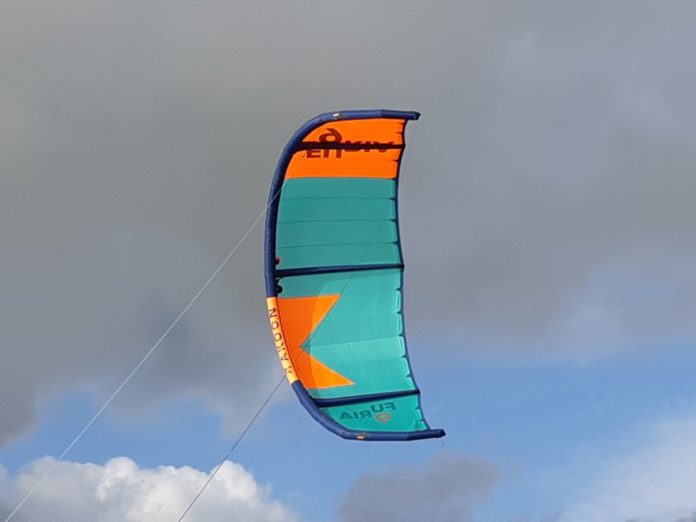 Like a Seat Ibiza the Takoon Furia has been around for ages. And they both have different stages through their existence. Volkswagen turned the Seat from an –even for the 80’s– ugly cheap car into a super competitive quality product nowadays. The same is sort of happening with the Furia in 2019. Starting with new materials -including triple ripstop and lines capable of holding 425kg’s- a new three strut shape a new logo and new people running the show. Furia ‘2.0’. Exciting! Especially since a nine meter is only 820 Euro’s. The Seat is now a serious alternative for a VW. Is the new Furia ready for a competition with an A-brand?

2019 it is the beginning of a new era for the French Takoon Furia. Which maybe the oldest kite which is still around. Going from 5 to 3 struts resulting in a 2.9kg weight which is similar as most modern 9 meter kites. And -very important – still a hell of a lot cheaper -40% roughly- compared to bigger brands.

What many A-brands are missing is that it has adjustable bridle setting. Similar as Core the Furia has three options for the last of the bridle line next to the tip.

Like an Duotone Evo it is aiming in our opinion at the average-novice to intermediate- rider. However Takoon does have another kite for beginners; the Wook.

Let’s start with the good part; we really like the bar. It has strong lines a comfortable grip and is capable of changing the height where the front lines split (‘V’) to about 6m (where Duotone kites should be ridden on). Better than the current Duotone bar which is also 150 Euro’s more expensive. But the Furia works best on the low V setting.

We did adjust the bridles and back lines settings a lot. We recommend to use it on the fast (outer) back line and the middle for the bridle connection for most riders. Beginners may find the middle setting on the back lines feel more reliable.

The first impression when you start the kite on the beach is quite different from its real DNA. With a short power stroke it feels more agile and reactive than it really is. As is intended it is nice and rather mellow on the water. It barks but doesn’t bite. Particularly in moderate winds Freeriding is quite okay on the Furia.

On the two ends of the spectrum there is something to mention. On the more extreme side -for more demanding kiter- the power comes and goes less fluid as we would have expected. Aiming for a jump -for example- in strong winds may give the feeling you will send it to the moon when powering up. But at the take off the power is a lot less. Something what can be felt also with a Duotone Mono for example.

The other point is addressed to beginners because it take some skills to know how to handle this situation. It gets triggered by setting the Furia at 12 o’clock and giving a short but firm pull. When the bar will go back up again there is a fair chance the Furia will drop down right in front of you. Deep down in the heart of the power zone. Far too low it will get back its power with quite a ‘bang’. Bridle setting issues? weight distribution too much forward? Who will tell.

Our feeling is that there is more to gain in the next versions of the Furia. After all the Seat Ibiza didn’t become a succes overnight either. The right materials and motivation to be a very logic choice for a majority of most of us are present. It just needs the right R&D.