It seems like it just cannot go wrong with so many legends -like Nick Jacobsen, Jesse Richman and designer Pad Goodman– working on the new North kites. The expectations for the Orbit? With five struts, ‘boosting’ as it trademark we think North Rebel, Core XR or Ozone Edge-ish. But our excitement -created by almost a hype- on the first version of the Orbit turned out into a disappointment. Its lack of low-end in combination with the strange quick and light turning kept us wondering what North is aiming for with this kite. Is it due to our kite abilities? Even the booster -Tarifenian Saul – couldn’t figure out the Orbit. We still have faith though that in the future North will bring a lot of improvements. It just needs time.

We have to get Duotone in this picture. Duotone (or rather the owners Boards&More) was known under the name North until 2019. But the name North wasn’t theirs but only rented. North Actionsports Group ‘took back’ its name last year while deciding to keep the same logo and use the slogan ‘North is coming home‘. Which suggest North at least partly wants to lean on the past -which isn’t their credit. A (little) knife in the back of Duotone.

But as Duotone is getting close to dominate the sport it could be a good thing a serious rival is popping up. But so far the expected loss of 20% by the Duotone head quarter in Munich -due to the name change- did not take place.

The Orbit isn’t a Rebel -we used the 2020 version back to back-. There are huge differences. For example the Orbit has a much tighter turning circle. More friendly but also less power from a kite loop. This aspect feels almost like a wave kite. But the shape -‘high aspect’- isn’t different from a Rebel. More differences are to be found in the power. Clearly lower for the Orbit. It needs a lot of wind. In low wind there are some back stalling issues on the Orbit. The power stroke (the distance where the power is felt) is longer and more graduate. Something we don’t like. 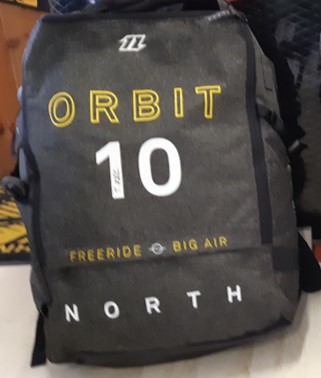 We prefer kites that can be powered on and off quickly. Like a FX, Bandit, Dice or Pivot. The fun factor is so much higher. Totally different kites from the Orbit. The bar pressure is low -like an Ozone Edge which makes it hard to feel where the Orbit is. So not really suited for beginners. None of the testers could understand what the Orbit is made for. A car with too much steering power gives a similar feelings. Let’s just leave it at that.

There is also some good news. On a directional the North Carve was preferred over the Neo 2020 riding waves. Which made us want to test the Pulse even more. Hopefully that turns out to be the one everybody love to ride on a twin tip. The rumour is that is will be out in January. We wonder why North didn’t start with that one. All in all very incomprehensible.

Naish Pivot 2020. The crown without the king.