A fantastic flying machine, super efficient, easy, predictable and very populair. It sounds like it is the perfect match for almost everybody. The Duotone Evo can bring you to the next level. To a new stage, a higher level. literally. The Evo is a classic which has earned its respect with a lot of fans. It is understandable why. It is also an economical choice because its wide windrange may let you get away with a two instead of a three kite quiver. And on the secondhand market an Evo is sold easy for a good price. But there is a catch. It is too perfect. And boring. Particularly for the experienced ones coming from a more C-like kite. Those kiters will miss some excitement. If you are into more aggressive, accelerating and unhooked moves the Evo isn’t your choice. 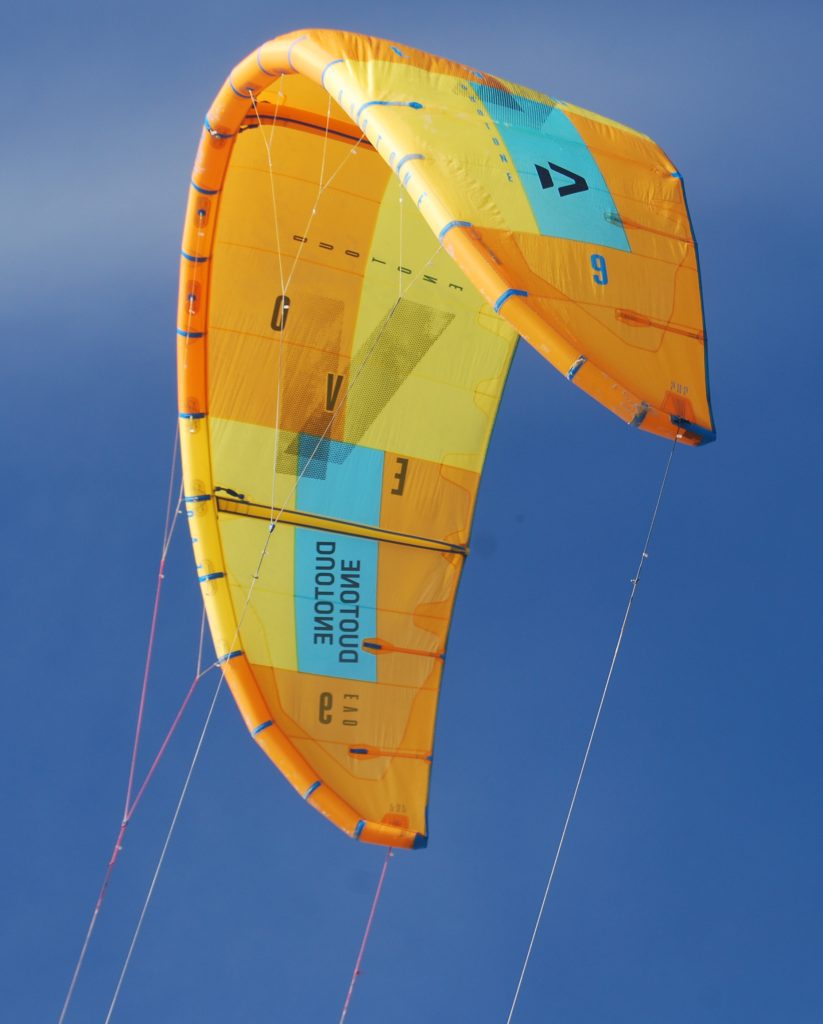 The Evo has an impressive history. Introduced by North over 10 years ago to catch up -in that time- with the F-one Bandit. We even dare to say the Evo has more than just caught up with the Bandit over time. The Evo is now the one which is often copied again.

Two years ago the Evo went from 5 to 3 struts (going down to only 3.0kg’s). Making it less bulky and a bit sweeter. Without creating a whole new Evo. Understandable because it has collected quit some fans over the years. Call it main stream, easy or friendly. But above all a kite that is accessible for everybody. Typically the words Evo and all-rounder can be found in one sentence. Usually marketeers who (need to) sell those kites don’t like such wordings, since it sounds too much like it is a beginner kite only. Fact is there is no other kite (use the style finder and find out) at Duotone which is more suitable for beginners. But calling it an beginner kite is giving it way too little credit. And there are a lot of other all-round kites which are much more limited to just beginners only. 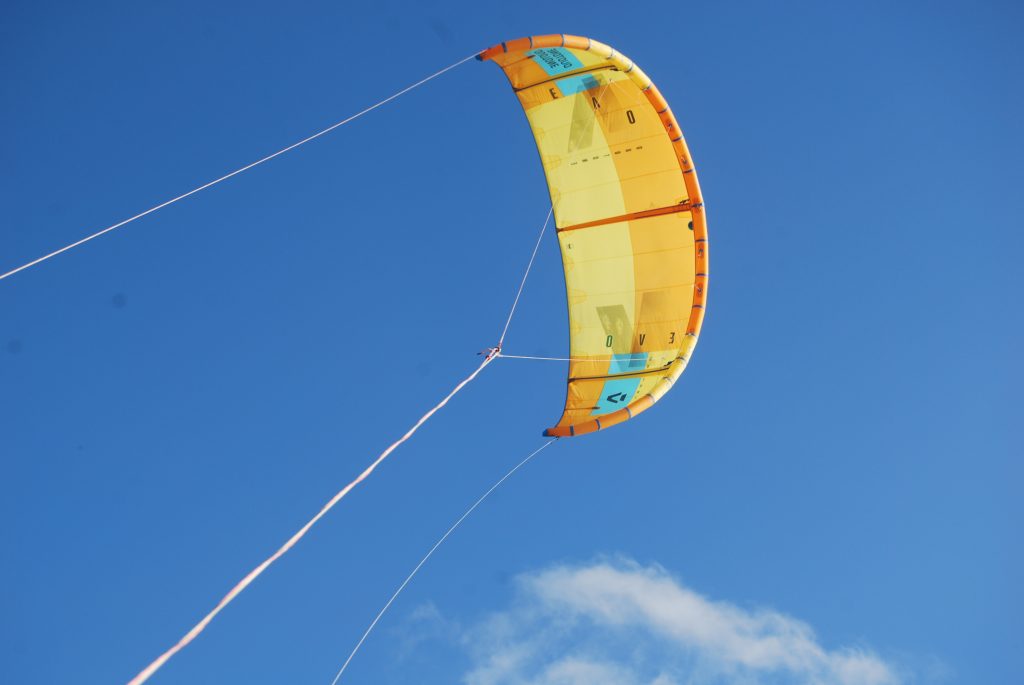 We can elaborate about the Evo’s windrange for ages. Like how one of our 100Kg test riders could ride the Evo 9 in just 18 knots on an ordinary twintip. To his own surprise. And how he used the 9m again the next day in 30+ knots. Again with a big smile from pure joy. To cut a long story short; the best side of the Evo is the ability for many riders to get a 2 instead of a 3 kite quiver of most other kites. And cover the same windrange. Of course there is a trade-off. For example that it clearly hasn’t got the sudden powerful yank as a Dice. The force is much more gradual but also over a longer time. Which means more floating jumps. Great for some old-school board offs for example and it clearly is better for gusty conditions than most other type of kites. But as said there isn’t anything in its DNA from a C-kite. Which is a clear difference to the Dice. Everything is a bit more slower and relaxed compared to a Dice. Even the Evo’s back stalling is in slow motion. 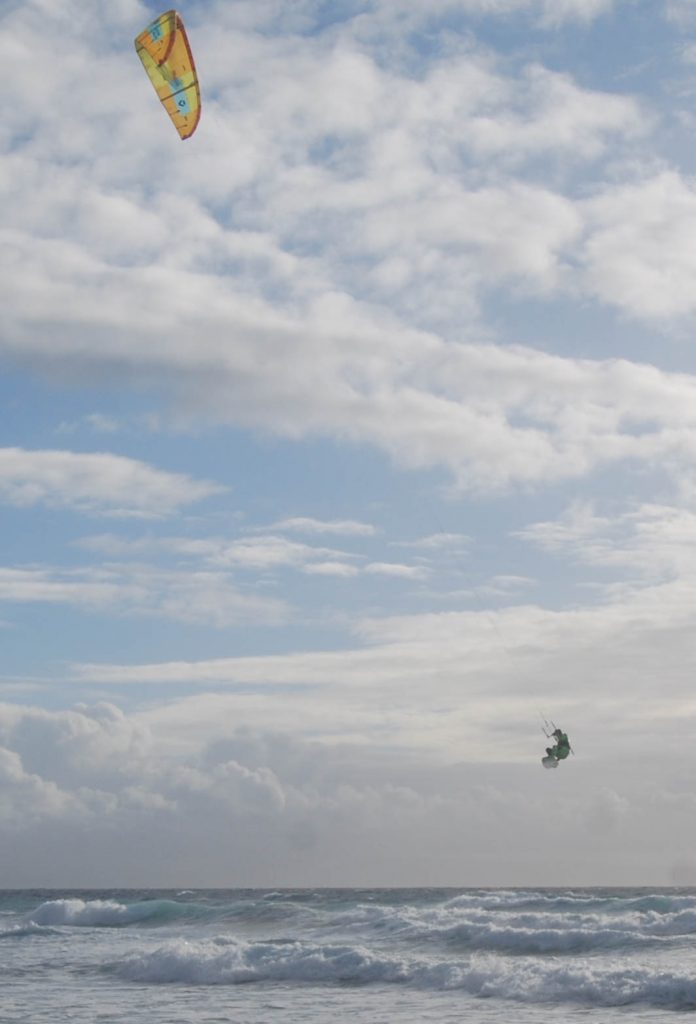 We have to mention -again- our comments, or better expressed our worries, about the quality of the lines that come with the Duotone Evo. For the moment we advice to leave the Click bar for what it is -particularly if you kite on a sandy beach- and take the standard Quad bar. Or any alternative that can accomplish a high “Y” which isn’t easy to find. There are a few alternative options (like the one from Harlem). Positive side on the Quad bar -compared to the click bar– is that you can see the wear out. Replacing them by better ones after a couple of months isn’t difficult and make sure to get 22m and 2 m extensions to get even a wider range out of the Evo. Main issue of these lines from Teufelberger is the way Duotone has added its sleeves to those 340kg’s lines. This downgrades the strength significantly. Sometimes even down to a staggering 130kg’s only. The consolidation can be taken from the fact there at least half a dozen other brands – like Spleene, Flysurfer and Best- with bars that are very far from perfect either (and we are not the only one to say so). But there are far better options. Which is a shame because the Evo is a really good kite and deserves much better.