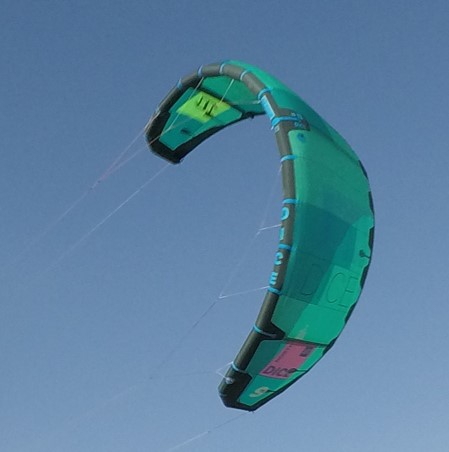 The biggest compliment a kite can get is to be the bench mark for other kites. That is exactly what we have been told during many of our tests; “could you compare our kite to the Dice?”. For 2018  two minor changes in the kite results in a something we would’t expect for the Dice. Did some of the Evo aspects get under it’s new tripled skin? Definitely more hang time and your Woo score will go up if you come from previous versions of the Dice.  But it is an bit of an unexpected development for a kite that used to give that quick, responsive but above all fun feeling.

The 2018 Dice is a few centimeters wider compared to the 2017 version. It sounds like a minor change. But in the kiteboarding sport such changes can have huge effects.  The longer Dice has gotten an extra panel between the struts. As a consequence the third batten has moved a bit more inward towards the middle strut.

There are more changes in 2018, like the option to choose which chicken loop you want on your North bar. But as with the wider inflation tubes those are not the relevant differences. It is the shape and probably the changes of the canopy (Trinity TX) that changes the typical Dice experience a lot.

We have to admit we test the Dice more thoroughly, as we use it the year round. We also have acces to several sizes and used every version from 2015 onward. Which means anything written in this review is on a very solid base, but also a bit under a magnifying glass.

We love(d) the fact the Dice is quick enough to throw it around with a limited amount of effort, zero worries on controlling the power and still capable of a impressive boost. Its hang time wasn’t the best. But who cares if you are the one having the most fun.

While some kites give the impression you are dealing with a truck, the Dice is more the opposite, like you are in control of a kart instead of a truck. With this friendly version of the Vegas you could not go wrong owning the Dice. It is a kite what should trigger for trying to do new stuff while still always maintaining that in control feeling.

Is this fun factor gone in the ’18 version? No it isn’t. But it just didn’t improve from 2017.  But let’s start with the positive points of the changes to 2018. What clearly did improve is its jumping abilities. It is the most outstanding difference.

Which is easy to feel in a longer power momentum and more floating feel while jumping.  It results roughly in 20% higher and longer jumps on the Woo scores. Which is good for image building out of the water.

But now the less positive side of the new Dice. It needs more input, while it lost some of its speedy, reactive aspects. A radical mega loop is still on its list. But the turning circle is bigger and -again- the peak of the pull is later and has changed noticeably.

Specifically coming down from a big jump the ’18 versions needs a lot of steering to catch your descending movement. The power development is also quite different from previous versions.  And the peak of the boost is a fraction later. It can come as a bit of frighting feeling if you are less experienced. The Dice -even more as previous versions- lets you know exactly what the wind does. In gusty winds it results in a constant pulling and pushing of the bar, which may be its worst new character.

The new canopy Trinity has three lines running in the direction of the leading edge and two in the same directions as the struts. Most brands are using the version with two by two lines (D2 Double ripstop), which North introduced around 2011. As far as we know only North uses the Trinity 3 by 2 canopy at the moment, although Core (Coretex 3 by 3) and Naish (Quad-tex 4 by 4 lines) are on a similar or even more radical path. Since these are rather recent development not much is known how much of the beloved lifetime extension will be met. But what we do know is that -apart from a theoretical weigh increase- it influences the kite feel. Roughly said it means the kite will be more firm and rigid. Which in the end probably is mainly a benefit for advanced riders.

For the Dice it is no different. From a sweet and forgiving kite in 2015 the Dice has grown step by step to a more powerful and more advanced kite in 2018. Nothing wrong with that, but the type of persons who will love the Dice has also either changed or has grown with the Dice. Too bad this means it also losses some of the ability to give the rider a feel of challenge to progress in a fun and friendly way.