Park and ride the Core XR5, just like a North Rebel. With impressive sweet long lasting jumps. The XR5, build according to Core’s high quality has a very firm, triple layered, kite cloth without any wrinkle what ever you do with it. But the XR5 is the opposite of a throw-around kite. Just as the Rebel or Ozone Edge you need to choose for this kite specifically to just go out cruise at impressive speed and make long floating jumps. Another acquaintance with the Rebel: It has exactly the same -quite high- price.

It will reward you sky wise and is a fraction sweeter as a Rebel. But it won’t challenge you to do anything outside of your comfort zone and it clearly isn’t made to go out on a directional for some slamming wave riding.

The 5 strutted XR5 (the “5” marks the fifth edition) is marketed as a high performance freeride kite. Exactly the same as the North Rebel. The performance label usually means less forgiving as a “normal” freeride kite, but also a more efficient (longer) kite. A type of kite that can result -disrespectful said- in the feeling you are dealing with a huge powerful truck. Useful to get you air born, but overwhelming for a beginner. Typically (older) people who started out kiting early -for some reason- feel acquainted to this feeling.

Just as the GTS4 kite from Core and similar as F-one and North the XR5 comes with a high split point of the front lines (“V”). This makes the choice for a different bar a bit limited.

Core has some idea’s of it’s own at some specific parts. Sometimes it seems a bit strange (like a twisting safety release) and some times they are right on top of the latest developments with the big(ger) brands like Naish and North. For example using triple ripstop Coretex, which seems to be the next step after the double ripstop.

North -for example- has partly incorporated it in its 2018 models and Naish now even uses a fourth layer in their Quad Tex. Another example of the progressive ideas from Core is the idea of having an auto re-twisting depower line  We could state Core sets the safety standard for the future (although we did have some remarks on it as can be read in our GTS4 review). For example the same idea is implemented by the North Click bar. The feeling you get about the quality of the XR5 is that of a state of the art kite. 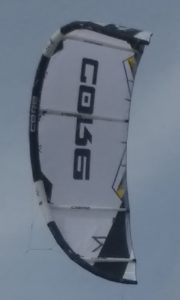 Generally speaking the XR5 has comparable aspects as the Rebel. To name a few: a high V, now (Rebel from 2018 version) both on four lines, -> Update; these remarks are not correct; We got a very helpful adjustment on our review which does impact one and other.

“Your review states that the XR5 (like the Rebel) has “adjustable back lines only” and does not have bridle set up options. However, Core hypes their “CIT” (Core Intelligent Trim) system and indicates both the back lines AND the bridle connection points are adjustable. Further, they indicate that that changing the bridle connection point affects the kite feedback, from more to less direct. Given your statement about (North and) Core designers being too “afraid to bother the rider with too much setting options”, it seems your tester was unaware of the adjustable XR5 bridle connection. Surprising really, as to miss that aspect completely you would have to both not really look at the kite that closely, and not bother to read Core’s literature for the review. To me it appears that in the haste to classify this kits as “just like the Rebel” there were some definite short cuts / oversights with this review, as I would have liked to have heard how it performed on the different bridle connection points.”
https://corekites.com/us/kites/xr5#ceb4ffb9f-a7a0-48a5-a5ac-ff02afc82d61

But the XR5 does differ at some (technical) points from the Rebel. The XR5 has no battens, the Rebel has 2, the XR5 has bridles, the Rebel (up until 2017) doesn’t.

But one thing is a striking resembling: both kites (9m’s) are 1400,- Euro (kite only). And that is not the cheapest price for a 9 meter kite, to say the least. Although an Ozone Edge is significantly more expensive, they both are one of the most expensive kites.

We had a go with the XR5 9m in about 22 knots and medium waves. It didn’t take long before we understood what the XR5 is all about. First of all it has very, very stable position in the air. Which should not to be mistaken with the stability you typically can get from a C-kite. Second is a feeling that the intention of the XR5 is to keep things going what ever the rider is doing. Where a C-kite does needs to give feed back suddenly when asked for (doing a trick or a powered move) and only stay stable when there is slack on the lines after performing a (freestyle) move. It also means it takes a hell of a input to get the XR5 out of position if you want to. Another way to explain its nature is describing what happens if you ask the XR5 to do a really powered trick. At the first glance the XR5 feels like it has a medium soft bar pressure and seems willing to go with you wherever you want. But when trying to swing the kite backwards the XR5 starts needs a big amount of effort. Resulting in a quite heavy bar feel.

Its steady nature is on of the reasons the XR5 is a kite that deals superb to any wind changes and also comes with an impressive low end. It does have some what vague feedback on its angle, so you need to trust your guts it isn’t going anywhere while you are air born for example. But actually you don’t need to worry about its angle in the air; it is still the same as where you left it. A huge, long jump is the XR5’s major attraction. And as a bonus it will set you -quite easily- down gently.

Compared to for example a North Dice or a F-one Bandit the XR5 is a whole other game. The power sweet spot while pulling the bar is quite different. Stronger and shorter from the Dice, Bandit to a longer more graduate feed back from the XR5. It makes it less critical for the XR5 to get the moment right to pop for a jump, but it also makes the take off much softer (or less exciting). But it does get you up further and higher as the Dice and Bandit, certainly in moderate winds.

Pulling the XR5 into a kite loop isn’t too difficult. giving a steady, almost friendly, pull. It does makes a relative bigger circle and needs a more than fair amount of pull on the bar to get it around. This move however suits a Dice or Bandit better. The difference at a kite loop from the XR5 to the Rebel is much smaller. The XR5 is slightly easier but a proper mega kite loop with a big powerful yank is definitely not on the XR5 to do list.

All in all Core is one of the few smaller brands that can can truly compete on all aspects with kite from the big brands. But -sadly- that means also a comparable price tag.