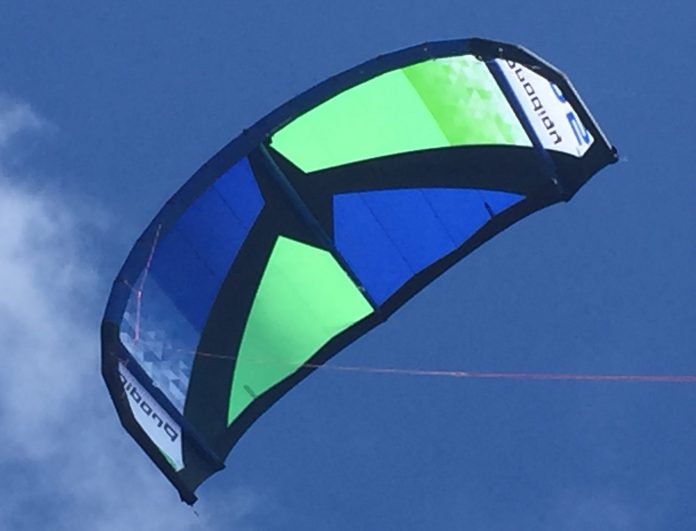 The name Prodigy might get your thoughts going towards the British extreme and hardcore dance and rock and roll performance, famous for its shocking Smack my Bitch up. The Ocean Rodeo Prodigy is quite the opposite. To stay in music terms it would rather be described by a mellow thé dansant get together. Reliable and stable, but not made to be thrown around. Perfect for kiters who need a tower of strength in their “fire starter” in to the kite sport, to keep it in The Prodigy terms. 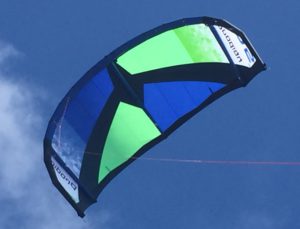 The pointy shaped tips, with three struts and single (!) ripstop is the fifth edition of the Prodigy from the Canadian brand Ocean Rodeo. With 1249,- for a 9.5m it is a fraction less expensive as other 9m kites. It needs adjusted line lengths (pig tails). Which makes it unique in some way, since it is the only kite we know of these days w 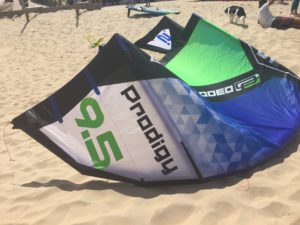 hich is designed like that. It has a wide inflate including a proper one-pump system. The bridles (nonadjustable) comes with multiple pulleys. There are no battens in the canopy. According to the Ocean Rodeo website it is their most popular & best selling kite

It was our first ever ride on the Prodigy, so we can’t say anything on the differences to other versions. But one thing is for sure on the Prodigy; it is a very easy and stable kite. There is hardly any getting used to it. On the contrary it will even correct your wild and possibly faulty moves a bit. Which also means it doesn’t want to make it a rock n’ roll party. Although the bar pressure is quite medium with a gently touch to it, the Prodigy is not to be thrown around. Jumps are relatively easy since the moment of pop is quite long. It certainly is not a boosting machine but making a long floating jump isn’t difficult with the Prodigy. The Prodigy isn’t a fast responding kite, but it isn’t as slow as you may think. It has a pretty nice flow to it, but trying to get it out of it’s own flow is not what it wants. The performance and feel of the Prodigy comes closest to that of the Airush Lithium. 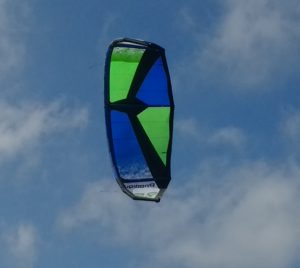 Trying to effectively loop the Prodigy power full is a bit of a no-no. It goes round and it won’t pull with a heavy force and surprise you. But the kite, as with other extreme moves, will sort of damp it en let you know this isn’t a good idea. As if it shaking its head and saying to you lets keep it mellow, shall we? For any one insecure, nervous and less experienced it is the dream aspect of a kite. For a more experienced kiter it will be getting a bit dull to soon.