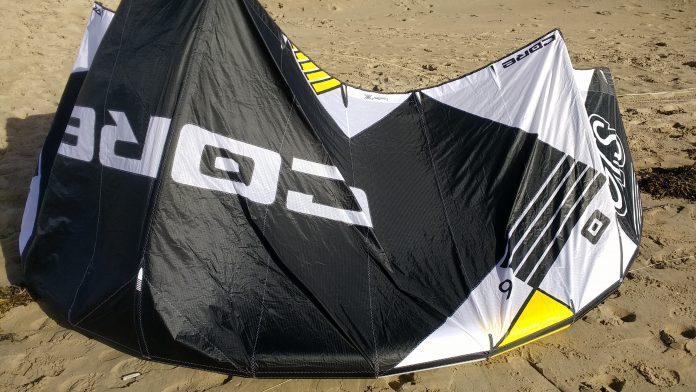 The GTS has a pretty hardcore reputation. The German Core brand gradually gets more and more into the picture with short-line kite mega loop king Steven Akkersdijk and Joshau Emanuel being one of the major competitor in the Woo world wide leader board with a stunning 27.6m on the GTS4. To what extend can this C kite, with 3 struts and a high V-split, be getting the average kiter some more kicks out their sessions? Or is it just for a select amount of athletic dare devils that can really benefit from the GTS4?

The GTS4 with the triple ripstop canopy “Exotex” GTS4 is easy to recognize by its C-shape and white&black colours. Its “ears” however are not as long as other true C-kites (like the Wainman Maniac or the Airush Razor) and unlike most other C-shape kites it only has 3 struts instead of 5 (which doesn’t need to say anything about it’s behaviour as we have seen from the KSP Charger). On top of that Core also has a true (which we have never seen in real life) wake/freestyle C kite; the Impact. Which to us makes the GTS4 more an open C Kite, like the Slingshot RPM or the Ocean Rodeo Razor). The GTS4 has 2 battens and a nice 3 options for both the bridles (with pulleys) and the back lines which makes a wide range of settings possible. The inflate to the one pump-pump to 8psi- is Core specific. Similar to the North system, it does not need a nozzle and – in principle – you can use any kite-pump although only the Core pump seems to attach airtight. Deflation requires a small chip, stored in the middle strut, to be inserted in the valve to release the air. 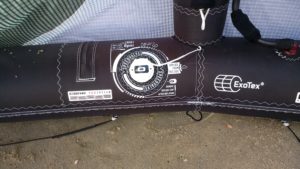 The GTS4 doesn’t come cheap at 1349 Euro’s. One of its competitors, the RPM from slingshot is 60 Euro’s cheaper. But for sure the build quality is very refined and strong.

Two plastic coated lines run through the double inserts in the bar. What we love is the auto rotating swivel creating maximum safety. Together with the North Click bar it is the only bar we have tested which untwists by itself. It is a similar system as Flysurfer, Blade and Spleene but with one important difference; the lines are protected with plastic which leads to significant less wear. But there is also a downside on this construction: the resistance. When powering up and pulling down the bar the two line system creates more resistance than other bars. Pulling the bar with a lot of steering input – in particular when under-powered – becomes annoying and might even lead to RSI pains around the elbow. However, the bar has been designed with an eye for detail; for example the lower white ring is protected (better than the Click bar which is unprotected at this part) with plastic against wear.

The safety system features a turning release. This may be tricky one as it is currently the only brand which doesn’t have a push away safety system (on a single front line flag out, which is just according to our wishes). Not wrong, better or worse but something to get into your head before using the Core kite. We also couldn’t use it in the standard set up in suicide mode (the ring is too small to connect to your leash). A bit strange as it is marketed as “An easy choice for unhooked freestyle”. A “wake style pro set” is available to transform the ring into a suicide set up. Other brands (like North) don’t need such a kit to get it into a suicide set up. 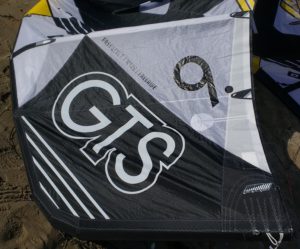 The GTS4 lives up to its expectations as an extraordinary kite. It wasn’t easy to test it to its full extent.We tested the GTS4 along a North Dice 2017. Although the Dice is also not the sweetest kite in power terms, the power we got from the Dice is clearly smoother and more gradual than the GTS4. It also has a more predictable and easier feel to it, Although with the Dice the power can be quite crispy and edgy too, the GTS4 is much more a kite to work on because of its restless movements. The shaking of the firm cloth make the kite a bit nervous -one wonders whether a small midget is running around restless over the canopy eagerly and impatiently waiting for some action. We tried all three bridle settings, since a shift of one cm can make a world of difference in kite feel. In this case you can reset only the outer attachment point of the bridle. The effects are not that big as we have seen with other kites. In the wave setting (suggesting you can ride waves with the GTS, which we consider it unsuited for) the kite seemed a bit less nervous.

The high split on the front lines of the GTS 4 is similar as the North Quad bars, but the open C-shape of the GTS4 clearly give a different experience. It turns and loops snappier, but you also have to time your jumps even more precise. Get it right and with some proper wind force (i.e. a lot, since the low end is not its main attraction) you will be rewarded with a spectaculair boost. Keep the GTS moving in the air to prevent a quick decent, since it doesn’t keep you in the air like an Ozone Edge or North Rebel – quite the contrary. 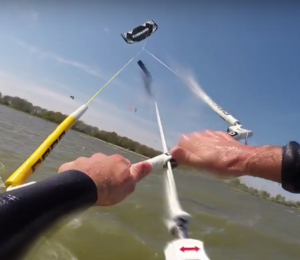 We wondered if we are good enough to be able to get the most out of its potential boosting. Most obvious attraction, which we loved is its (mega)kite loops. They are phenomenal. The GTS will give the thrill seeker what he is looking for; a snappy powerful perfect feeling. The high V in combination with its bridles makes it more attractive to loop it furiously through the power zone than for example the North Vegas. The Vegas takes more effort and more determination to get it going. The GTS show how the perfect mega loop should feel like. Which is a wonderful and rewarding feeling. But with this great mega kiteloop feel does come a typical GTS behaviour, which no other kite has. You should be ready for it. It is like being in an Asian restaurant with an undefined sauce next to your diner. How spiced up your diner is going to be is hard to tell. It may very well be a sauce which you can handle easily but at the same time it can get you caught totally off guard and burn you inner body for minutes. The GTS4 is just like this. You need to be a crocodile hunter and be ready for when things get snappy. It has a mind of its own and can get furious with the most snappy power (in a kite loop) we may have seen in the right -windy- conditions.