Years before the so called game changers North Click bar or the Cabrinha fireball F-one invented  a real game changer; the revolutionary multi-purpose Bandit. It has a brilliant and unique capability in the way it quickly powers and depowers by just sending the bar a few centimeter up or down. This way the Bandit gives such an easy and being-in-control, predictable feeling which made it a very popular kite. Beginners love its low bar pressure and more advanced riders will enjoy the quick, snappy behaviour and high wind usage.

But the revolution has come to an end. No wide inflate, no re-adjustable bridles, no single flag out safety, no swivel below the bar, relatively weak lines and still with damaging pulleys on the bridles.  Don’t get us wrong, it is a good kite, but it clearly is lacking progress in the evolution of its design .

When the first version of the Bandit was produced around 2007 it was such a succes even North had a closer look at it. North decided to start to design a similar kite which became the Evo. They even wrote it in their own book True, 10 years of North kiteboarding. Of course a huge compliment when another brand “grudgingly admits” F-one build something which they are  inspired by.

Both the Evo and the Bandit were designed for a broad purpose usage; for beginner to advanced riders, for all styles. And we must admit F-one more or less proofed it worked by just having one type of kite for quite a while.

The 10th version isn’t any different for that matter. It also has its recognizable bright, multi color look. In fact most people won’t even see the difference between the 8th, 9th and 10th version.

Prices from the 9th to the 10th version haven’t changed, which is quite amazing. Less amazing, is that it still got the old fashion small inflate.

The bridles are still the same, and sadly they still have the pulleys (2 on each bridle) which contains wheels which on the long run will peel off the outer layer, get stuck and break the bridle lines. At this point F-one can learn something from North. They have pulleys without wheels, and work great without damaging the bridle lines.

The 3-strutted Bandit contains 2 battens and 3 positions on the tips to adjust the bar feel and responsiveness of the kite (all similar as previous editions). But unlike the Ozone Enduro or for example the Airush Union the bridles cannot be re-adjusted. Did we miss anything or is the 10th version very, very close to the 9th?

The monolith bar has a new color (yellow and red), but again we don’t spot any real changes. Again we miss some features other brands did introduce. The metal swivel is still the same and won’t do its job properly and lacks a -more safe- single flag out system. If you loop the kite too much one way and you will get crossed front lines above the swivel. 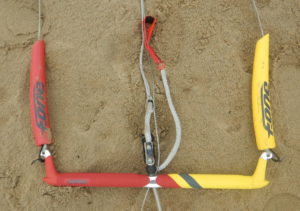 There is no swivel below the bar. Nor is the size of the bar adjustable and it hasn’t got a stopper ball. All features which are not a real big issues, but the strength of the lines (probably same as previous years) can get a problem. F-one uses one of the weakest lines in the industry. Which can be a problem when heavy kiters are abusing it, for example, in gusty winds. It won’t help either in the long run.

The bar itself feels very natural and pleasant. The bar comes with

22m lines, although the label on the front lines suggest a 18.6m line length. But it has a split point (“V”) which is about 4 meter from the bar (which adds up to 22m lines). By the way this split point at 4m, which can cause problems, if you use this bar on kites from other brands.

Just to be sure we had a little check by putting the F-one bar next to a 22m North Click bar. They turned out to be almost exactly the same length. Similar to the North lines, the knots on the end of the (bridle) lines are super small. We would recommend to just make a bigger “8” knot yourself to prevent lines slipping off.

We could use the 9m in it’s full wind range while switching several times with a 9m Dice 2017.  Immediately the Bandit is your best friend. It probably is the easiest kite in the market to power and depower quickly, without much effort. Pushing or pulling the bar a few cm will be the difference between power and losing it. It also is really quick and super easy in turning or even looping your kite in any direction. It can make a quick snappy loop around its axis without creating much power -like a C kite does-. Or when you have enough jump height, loop the kite in a bigger circle with more power.

The Bandit has a very light bar feel with -also due to the relative short to medium line length- will do exactly what you want. Most beginners will like this aspect, although it is less suitable for the over aggressive and powerful novice. Setting back the steering lines at the tips  might solve a nervous feel in this case a bit.

More experienced users love it’s high end wind usage. The Bandit is not known for its low end capabilities, but it can be used in tremendous amounts of wind. However the depowering is easy, the kite will show some restless movements (it might need a few extra battens?). Compared to most other kites the Bandit is far less rigid. It almost gives a very light but pleasant feel.

Finding the perfect take off moment with the Bandit is super easy, it isn’t as sharp and explosive a s a C-kite, but it is far from being as vague in its power peak as -for example- a Slingshot Rally.

Comparing it with the Dice there is a clear differences. The Dice feels more grown up, takes more energy to ride and has a much more firm or rigid feel. Where the Bandit flutters through gusty winds, the Dice will give you a bumpy ride. Powered up the Bandit gives a slight jelly fish feel, where the Dice without any warning will give you a run for your money. Freestyle moves clearly are more suited to the Dice.

F-one made kitesurfing super easy with the Bandit, no matter the discipline or level you are riding. Too bad the quality and details of it isn’t brought up to date yet.