The Lithium pops up in the Airush kite line in between the DNA lesson kite and the more advanced and allround performance kite Union. A bit disrespectful we could say that the Lithium is a beginners kite. It will get you going with smoothed out power changes, eases better through gusty winds and doesn’t need perfect timing for jumping. But still we want to point out most of us will benefit and have fun with other -more advanced- kites really quickly.

What actually distinguish kites for beginners from other kites? In general some statements can be made from what we have seen in our tests. A typical beginners kite, mostly pointy shaped at the tips, usually has a longer (or more spreadout) moment you get the power from the kite when pulling the bar, or when getting the kite in the power zone.

Most of those kites also show some slower reaction response but benefit of giving more or less always a certain amount of steady pull. Side effect is that these kites – including the Airush Lithium- will benefit of a smooth, easier pull through gusty winds and generally have a broader wind range. They usually perform better as more advanced kites of the same size in lower winds. It results in a kite which allows a bit more room for error in -for example when exactly to pop for- (your first) jumps while aiming for the optimum, strongest pull of the kite.

Downside of these aspects are less responsive and more indirect kite. Most of them also tend to turn around its axis (pivoting) more than average when pulling strongly at the bar, instead of giving a strong feed back from the kite. This aspect of a beginner kite is one of the reasons – in our opinion- which will, or should push you, to step up to a more advanced kite quickly. Hereafter you may perfectly be never switching again! Exceptions only for example when going close to a 100% for a specific discipline; towards a c-shaped dedicated freestyle kite or when riding only on a wave board.

By the way, not all brands seem to look the same way to beginner kites. For example the Gaastra Pure from 2015 (8m with 5 struts!) or the Slingshot Rally have such a pronounced feed back on the bar, which we consider to be too overwhelming. To our opinion such amount of bar pressure will scare of beginners (especially less strong ones, like girls) and overshadow the benefits of knowing where the kite is. There is also some differences in pivotal behviour. For example the Lithium can make a very tight turn , while the Rally needs much, much more space to turn around it axis.

The good news is that after you swapped your beginner kite for a more advanced kite is that generally -when you get it right- you can stay for the rest of your kite career happily and more or less ever progressing with an “advanced” kite. Ordered -with our independent, subjective choice- from easiest to the more advanced kites we think will be of perfect fit; F-one Bandit, Airush Union, Cabrinha FX, Ozone Enduro or North Dice. 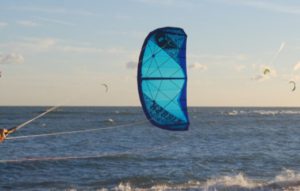 Airush produces the Lithium for over seven years now. Its evolution benefits in general from improvements which are seen on other Airush kites, for example the second version of the Next Load Frame. It also has some neat options to reset the bridle on the leading edge. Usualley with spectacular changes. Something probably only about 20 to 30% of the kites have, like the Slingshot RPM, Bull kites and the FHL Harlem.

To our -positive- surprise Airush now also has the option of a regular depower cleat, instead of the blue and red pull straps.

Okay, something personal, but the majority of the riders visually misinterperter the actual amount it is set on.

The Airush Lithium, with 3 struts, no battens, 4 lines and pretty long bridles with 3 pulleys each, comes with the aspects as we described for an average beginner kites. It behaves pretty well in the gusty winds, jumps -lofty en floaty (like the blue line in the boost chart) – easily with medium bar pressure, impressive low end and warns you quite gently but still well balanced when the wind is picking up. However, if you stop concentrating the kite tends to turn and pivot down when you try to park it in the edge of the wind window. Exactly why we -advanced riders- much more love the Airush Union.