Going big, and really big, that is what the Rebel is mainly about. It is a potential Woo leaderboard wining, super stable and powerful, yet still pretty much on-off kite that is around for 10 years. The 2017 version isn’t any much different as the previous versions. We suspect the majority of it’s (older?) fans wouldn’t like that any way. It has a long history and large group of hardcore Rebel lovers who generally are not looking for changes. And that is exactly where we want to make a point. The Rebel is the opposite of a kite which can be thrown around. The (long) shape of the kite in combination of the amount of power makes it quite unattractive to do anything else than jumping.

Everybody more or less knows the Rebel. It has been around for ages and always has been a kite with quite pronounced aspects like broad wind range (especially the low end), jumping and stability. The 2017 version is no difference to that. With its high aspect ration (long, but narrow kite), 5 struts and 2 battens in the trailing edge,

this tested 8m upfront tell you what it is going to do (and not do).  It still is one of the last kites without bridles and is about five percent more expensive as the Dice. One of its most obvious competitors is the Ozone Edge (the V8 is about 7% more expensive as the Rebel). The Ozone has a lighter bar pressure and in some ways even more outspoken as a jumping machine. We prefer the Ozone pump valve over the one of North. Simply because the one from North requires that extra turning inside the valve. Potentially sand can get in, which may let it leaking air occasionally. Some how, looking at the Ozone inlet for example it seems unnecessary just like the 6psi recommended pressure (too low!), 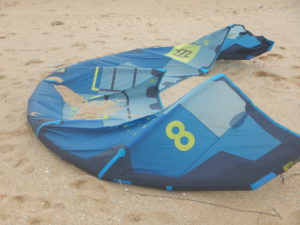 The 5 line bar with 22m bar we used is similar to the ones from last year. With one clear exception; the colours. As we stated before, we miss the point why North choose to switch the dark blue side from right in 2016 to the left in the 2017 version. Okay, there is a clear red stripe on the wrong side and It just needs some getting used to, but we don’t see the point to use the same colour for different sides from year to year. The whole point of a colour is to distinguish right from left -as quick and easy as possible- after spinning the bar.

Choosing between the 24m or 22m line length for the Rebel is not so outspoken to us as with the Dice. 22m Makes the kite more responsive and more fun, but you will lose some on jumping height and at the low end. North has made some interesting statements on this, which comes down to “usually use 22 m lines on all the sizes , but for extra power we sometimes use 24 m.”  For the moment we would say anything bigger than 9m would suit a 24m line length better, as the main goal of a Rebel would be jumping anyway.  Interesting is also the fact you need to check the length of your fifth line every fifth session.  Although easy to remember, it still is something which probably nobody does…

We tested the 8m Rebel in 22, building up to 32 knots of very gusty wind at the Atlantic Ocean in Spain. We also had a 7 and 9m Dice 2017 in the same conditions to compare. We used all kites on 22m lines. The Rebel gave us the Spain leaderboard winning of that day (11.4m), proofing 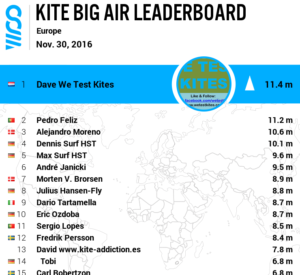 it does work perfectly as a jumping machine. The Dice’s jumping height were not above 10m, not even on the 9m. Another clear advantage came up in these condition of the Rebel over the Dice was its stability in the gusting winds. The Dice, which is designed as a responsive on- and off kite, will let you know much more it is gusty than the Rebel. The turning circle of the Rebel is quite big, which is no surprise  seen the its long shape. Looping the kite quick, properly, with a huge explosive pull, is close to impossible.

We know some people also use the Rebel on a wave board. Also on the North website‘s style finder marks the Rebel as favorite when the options are set to 50% wave and 50% freeride. We would advice in case of wave riding to reset the back lines to the soft setting.

Better choice for pure wave riding would be the Neo, which pivot or turns much, much tighter. Looking around in Tarifa (where a high number of North’s kites can be seen on the water since it has a overwhelming amount of North centre’s and shops) 90% of the wave riders, especially the better ones, use the Neo for their impressive (strapless, freestyle) wave acrobatics.

But -as expected- the Rebel isn’t our favourite kite on a twintip. It just doesn’t trigger you to go broaden your style, fill that trick book and push your limits besides jumping. New stuff, unhook, kite loops or any freestyle tricks are not on the Rebel’s invitation list, so to speak. As we see it kiting is a fun sports, which should get a smile on your face. Which in the end is more important than be the leader of any competition.