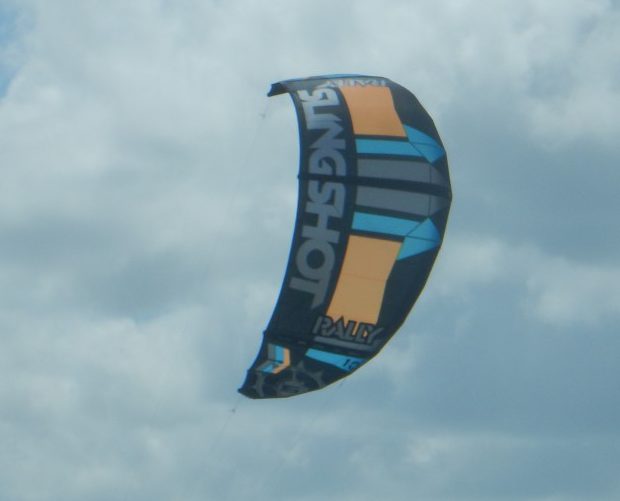 By the looks of the pointy open Delta-C profile shape the Rally belongs in the hang time corner, competing with for example the Ozone Edge and North Rebel. The Slingshot Rally is around for about six years now, but we always wondered what its unique selling point is. The best we can come up with is the great low end together with its long, floating jumps. But we will remember it as a slow motion kite, because of its slow responses. We just had a go with it for a couple of hours, so this review is not the longest we have written.

Frankly we didn’t mind the test was this short. After a dozen lofty, but very long jumps while struggling to get the kite with all our efforts in front of us again at the landings, the tremendous amount of bar pressure was really getting to us. The bar pressure is also its big, and we mean huge, difference with the Ozone Edge, which also has great incredible hang time. Both are pointy shaped kites with five struts kites where the Rally even has a few stick shaped 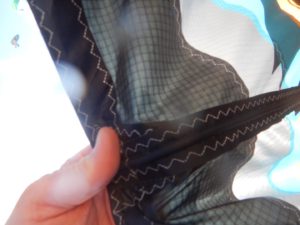 “battens” which successfully helps keeping the kite in shape in powered conditions.

As for build quality of Slingshot, no doubt about it generally is very good and there is not much to worry about. We just hope some day the Slingshot bar gets an manual twistable depowerline, so they can get rid of that 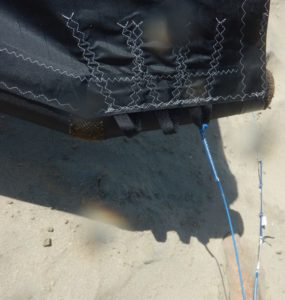 enormous big and heavy swiffel (which in 2017 is replaced at one bar by a more simple version). The bridles cannot be adjusted but the back lines can be set at 3 positions. We, and probably everybody, will set them at “fast”, the last connection towards the tip.

Obviously kites shaped long and narrow (high aspect ratio) like the Rally will create efficient and powerful kites. But that usually also means large turning circles and less responsive kites. The Rally has en enormous turning circle. Meaning kite loops -for example- will take some time, and during the loop the pull isn’t as a proper kite loop should be; powerful and short. It is rather the same pull during the entire loop. 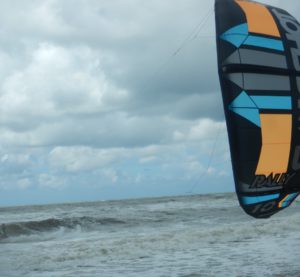 The same is for the amount of power you get putting the bar up and down to power/depower. The power reach is long, very long. It does help in the air, to pull you up even more by just pulling the bar a bit more. But it will take some muscle power to achieve it.
For freestyle moves it misses out the necessary aggressive pull while building up the load by edging hard. Old school moves, like board offs or dead mans is more to the game of the Rally, but again it takes a lot of effort in the landing to put the kite forward to have a proper landing.

It was fun to be riding so powerful while everybody was just barely cruising with a even bigger kites. 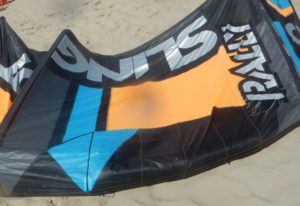 But as explained it is getting boring and tiring too quickly. Therefor we don’t understand that Slingshot puts so much wording on the Rally that it is the ultimate all-around weapon of choice for kiters across the spectrum. It is something arguable and personal what you think of a kite with a lot of such specific power, but to our opinion it is far from the most appealing kite for intermediate kiters to get the most fun out of an average kite session. Something an Ozone Enduro, Cabrinha FX or North Dice for example will suit much better for those kiters.