“A board must be my friend, my partner, not the one I have to fight with. I want to trust my board and be sure that it will perform the way I want and expect.”  These are the wise and passionate words from twin tip shaper Saul. He is not only referring to the shape, but also to the fact you can get your twin tip looking just as you wish. On top of that the board will be cheaper as most others.

Saul customs will make both the shape and the appearance just as you want it. Saul is an experienced shaper from Lithuania (Europe) and respectful 40+ freestyle addict himself. He offers a couple of standard shapes and is waiting for your artistic input to get any picture or print you want on the board. Made in his own production unit he ensures that at least the quality of a standard production board can be achieved; “Boards of the highest quality, newest shape and unbreakable“.

When we got in touch with the possibility to get a personal designed twin tip, the first thought went out in a commercial way. What if you could be riding, preferably doing an huge impressive jump, with the logo of your business gigantically displayed on the bottom of the board? Or if you own a beach club which teaches kiteboarding for example; “Take lessons at xxx and join the fun”. The possibilities are endless. Perfect advertisements in the environment where it belongs. The price of around 450 Euro’s cannot be an obstacle, which remains one question: Are they any good or does the freedom of the looks interfere with the quality of the riding?

With more than eight years of experiences in building twin tips, the production by Saul has come to a serious level. He took his passion into a real business after many friends kept on asking for more of his home made boards. All boards we tested seem to have faultless shapes and are just as slick as any production board. Which isn’t a surprise since Saul’s production is executed and controlled by a computer (a so called Computer numerical control, CNC) in Lithuania (Europe).  Endurance is always hard to test, but the Pure and the Crossover should be able to take the beating from riding with boots easily. At a first glance the boards look like they belong to some one so important he (or she) got his own line of twin tips.

If you dig into the background of the designer Saul (check out his video) it becomes clear he is into wake- and freestyle moves. His home spot in Lithuania offers him butter flat water to get the hang of a lot of technical and difficult tricks. No wonder his own favourite board is a quite extreme freestyle/wakestyle board.

We had a wonderful test with a couple of Saul’s boards in Tarifa (Spain) with superb conditions on a open ocean (with medium waves) and winds from 18-28 knots during several days. Saul was there to guide us in changing straps to boots and helped explaining a few things. Explanation was needed which board was representing which, since the boards don’t come with type or length indications. Something which can be recommended to put in the design, in case you want to sell the board later.

Saul’s own usage comes clearly back in the Crossover Kiteboard- wakeboard twin tip, his own favourite. It has a huge amount of rocker and is -off course- ridden with boots. We tested the 138 * 42 cm which should fit the average riders up to roughly 85 kilo’s. The Crossover rides like the Airush Livewire or the North Gambler, which is really a compliment for Saul, as those boards are 25% to 60% more expensive and won’t be styled to your wishes. Most obvious character of the Crossover is its enormous rocker. It also has 4 channels in the tails 5mm deep with in the middle double concave U channelled, 5mm deep. 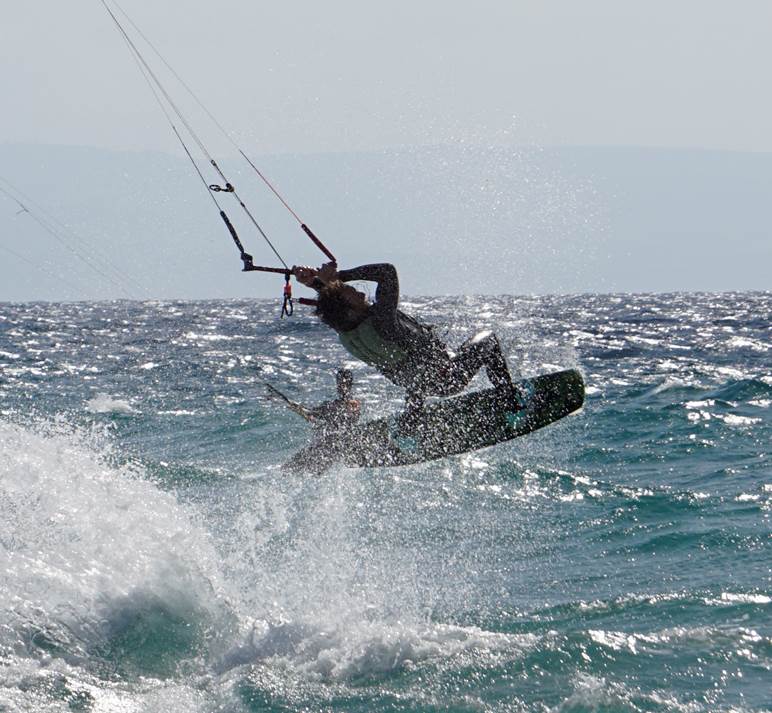 Those channels are not as radical (deep) looking as the one’s of the Airush Livewire, but it comes close and says something about the aim of this board; maximum grip when powering up for a pop. The three stage rocker makes the board by just thinking about it to turn and twist. It pops -like such a board should- easy and landings are medium to soft. There is a trade off though, the board isn’t fast, won’t carve upwind as some other boards and it needs an advanced (freestyle)rider to get the best out of this board preferably on flat water.

The Pure is a board for advanced riders. It positioned in between the Standard and the more radical freesyle/wakestyle Crossover board, but it felt much closer to the latter. It can be ridden without any problem on boots (it was a good match with the Humanoid boots), but if you going to get the Pure with the footpads&straps you won’t be disappointed. They come from the brand Yeti and are simple but soft and comfortable. They are better than most others we tested. But since the board has a quite amount of rocker it wouldn’t be strange to ride the board with boots. The Pure has a great amount of pop and is very much alive and loose on the water (even more than the F-one Acid or a Best Admiral). There for it jumps easily but it isn’t a really fast board (like a Clash which we used back to back during the test) or a upwind miracle. We used the 136 *41 which is the middle sized model of the available 5 lengths. On straps this size is okay for persons up to 80 kg’s but on boots take one size bigger.

The cheapest board of the range is the Standard kiteboard. The rail is quite round, it has less concave and channels than the other boards and seems to be made for riding standing quite straight up instead of putting a lot of pressure to the rail. Is was the least of our favourites in the test. It will suit beginners or even a kite school really good. The board feels quite loose on the water, which is a bit of funny feeling in combination with the high stance. It does however make (learning for) quick turns very easy. Going upwind is a bit more tricky than most other beginner boards, but you do get -also due to it’s relative flexible capabilities- a lot of comfort back for it. Making your first jumps is there for also not a problem on this board.

Other producers with custom design

Saul Custom is not the only one who makes twin tips with a own design. There a couple of companies that do more or less the same. From the looks of the website they do tend to vary in its professionalism.

For example we found Antig99.com (Taiwan, prices start from 380 US$ including pads, straps fins and delivery to Europe). It is possible to get also straps/pads and fins with your own logo’s etc.

Borrn2kite.com (Austria, prices with own design start at around 480 Euro’s) choose from 5 different shaped boards.

Carved (Germany, price 1499,- Euro) also offers twin tips with a custom design, although the carved website is not very clear on it but we did get a confirmation by email it is possible.

Standard kiteboard (board only) 350,- Euro

Crossover Kiteboard Wakeboard (board only) 450,- Euro

Shipping in Europe is free, to the US around 60 Euro,-

Order time is around 2-4 weeks.