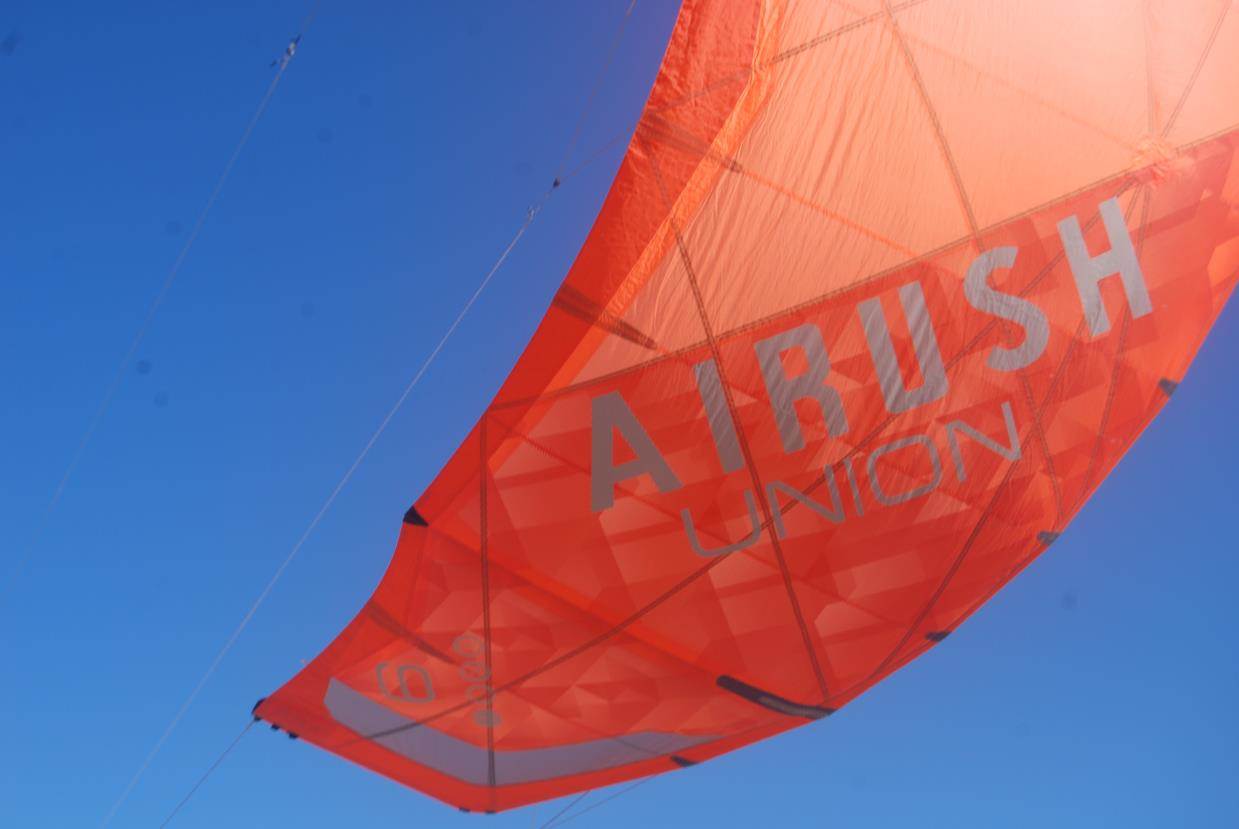 Union, the newest kite of Airush has a lot of different applicabilities. This kite is fulfilling the most important goal on top of everything: to have fun out there. Good in almost everything but not the best at any of the specific kiting disciplines. Nonetheless the Union is one of the best five kites we have tested for every day use. 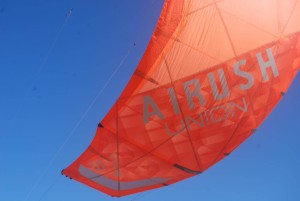 After having a friendly chat with the laid back Spanish former world freestyle world champion Alex Pastor and his colleagues at the Tarifa Airush shop Alex Pastor Kiteclub we where offered to try the all new Airush Union. Being truly interested in our opinion we got two 2016 Union kites and a brand new 2016 Airush Core bar for a test. We know not a lot of formal world champions who are so committed to his products. If you have the chance you certainly should visit him and have a chat.

The Airush Union, which more or less replaces the Airush Varial X from 2016 on, has 3 struts, perfect one pump with big inflate, and no battens. On the tips the steering lines can be set at three different settings
and the steering lines also have different knots to adjust the power (which we actually did change a couple times).The very long bridles have 3 pulleys each and can be set at two different settings on the leading edge.  The pulleys have wheels, which can cause damage on the long run on the bridles. We prefer pulleys without wheels, but a good alternative to avoid clocking of a pulley is to regularly check if all wheels still turn. The Union comes with 24m lines, which can be shortened by taking off the 3m extensions to 21m.

Something unique to this kite is the so called Dyneema Load Frame. This frame is referring tot he spider web of strings which is easily recognizable in the canopy of the Union. It should basically give a more stable and longer lasting kite. 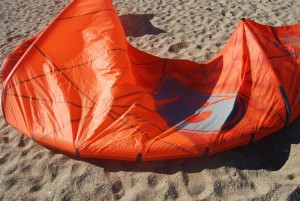 We could test the Union 2016 9m and 7m several days in Spain, Tarifa. We have had a variety of conditions while testing from underpowered 15 knots, the sometimes very gusty Levante till 28 knots in choppy water and with waves up to 2 meters. We could use them along side with a 2016 North Dice and the F-one Bandit IX 2016 version on several different types of twintips. Unfortunately there was no chance to test it on a wave board.

Before stating any test results it is really import to stress out the Union has two options which influences the results a lot; Most important is the used line length and the choice of the setting of the bridle to the leading edge. Each type of usages requires different settings. For example in low winds, (just) jumping or old school moves can certainly better be done with the 24m lines. It is also such a nice feeling to get the exact bar pressure as you prefer. On which we think anyone can get, since we already liked the medium to soft bar pressure on the average settings.

9m bridle settings. With a big smile we opened up the 7m and saw that it actually explained what we felt (see the picture) on the 7m Union kite; a bridle setting with medium and soft bar pressure.  Just before we got back to the raw footage of his 14+ meter jumps that day we realized the 9m was a prototype which missed out the details the final Union (like the 7m) has. 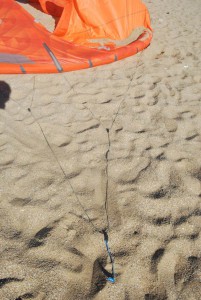 that we would be dealing with a slow and heavy pulling low end kite, but this is certainly not the case. The Union, even on the 24 meter lines, when set on the proper bridle settings (medium), is remarkable reactive. The pop while loading for a jump is very predictable and medium to soft to get you in the air and it will keep you there longer than most other kites. Stalling will only happen in really dipping winds. Long before it stalls the kite starts to look really over sheeted (and gets a bit of a ugly appearance).

Kite Looping is really not something to recommend on the 24m lines. The Union make a medium to big sized circle (probably affected by the low split point) and is quite soft and steady in its pull. On the 21m lines it is all a bit smoother and somewhat more natural. Both at a radical kite loop and in strong (gusty) winds there is a tiny bit of a jelly fish feeling, not something to worry about but it once more tells you the Union is there to be your friend and doesn’t come really close to a C-kite slammer.

Compared to other kites

The Union certainly has a longer hang time than the Bandit and the Dice. It also deals better with the gusty winds and it has the best wind range (almost as close to the Cabrinha Switchblade). What stands out most from the Bandit and the Dice is that the Union has much more options to set the kite (for example the bar width, bridle and line lengths) for a certain aim. The Dice is more aggressive and feels more firm than the other two. The Bandit has the best high end reach (but worst low end). The Union (on 24m lines) comes quite close to the happy feeling we got from the Ozone Catalyst 2015 which happen to come also with quite similar set up on 25m lines (not to be mistaken with the newest version, which is completely different). 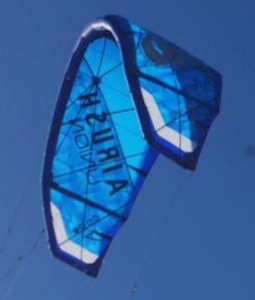 Anybody can enjoy this kite, from beginner till advanced wave riding although some advanced kiters will miss a bit of aggressiveness in the Union (for example to perform radical freestyle moves). The Union is really a simple but effective kite. There is no need to getting used to it, If rigged the right way (bridles and line length) it does almost by itself what you expect.

We used a brand new Airush 2016 Core Bar. It changed from the 2015 in some details. The bar has not only a smaller diameter but also different width settings by a clicking system. 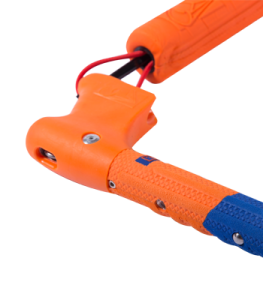 The front lines (with a low split and a total flag out -as all safety systems should be- when released) are thicker as the steering lines (similar to Slingshot). The lines have extensions, but on the Airush website there is no mentioning of the line lengths. After checking with Airush we now know it is 24 meter which includes 3 meter of extensions. So either ride the Union with 24 or 21m lines. 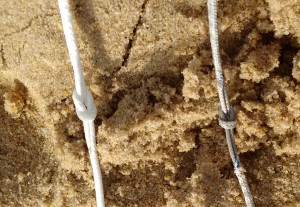 For the test we tried both line lengths. Since it influences the way the kite is usable quite a lot, we wonder why there is not more explanation on the Airush website on the influences of the set up. It would make the versatility claims of Airush on the Union so much more valuable. The same goes for the bridle settings on the leading edge. The depower system, which is similar on the 2015 and 2016 Core bar, is something we don’t particularly like. You need to pull on a plastic triangle (either in red for less power, or blue for more) with quite some force, which adjusts a strap. We think not all people (girls?) will have enough strength in their fingers to get this system going as they want to. All testers agreed it is not easy to see how the (de)power is set. All in all It is a minor thing and is a bit of a matter of preferences instead of something that is good or bad.

The (two) depower ropes are nicely covered with plastic against wear out and comes with a stopper ball on the fly. The depower rope is manually twistabel so you can untangle your front lines to avoid any blocking of the lines when using the safety system. Though it is not that easy to twist it since it is missing a proper feature to actually turn it (so you need to turn it by turning the two depower lines). A de-twisting feature which, if you think about it, for safety reasons should be on any bar. Mainly since we have not seen any brand with a swiffel (split of front lines) which works properly.

Reaction from Airush on the review

It was a really solid test, and we gonna update the website about the bar