Probably the nicest surprise of 2015 was the North Dice with it’s quick response, direct, light, wide wind range and an amazing quick depower on the bar made this truly do it all kite almost everybody’s friend. No wonder we were very curious for it’s offspring. The 2016 Dices were released in the beginning of september and luckily we were already able to get our hands on a 9 meter.

We were so excited to test the Dice 2016 we took it out the first time the wind did hit the coast. Unfortunately the wind was very light with just 16-17 knots of real on shore wind and big waves compared to the strength of the wind. So we did not expect we could take out the 9 meter, but curiosity killed the cat. Our lightest test kiter decided to give it a try and didn’t come back for at least an hour. Needless to say she liked the 2016 Dice and the kite already had an amazing low end in 2015. After she came back I could not resist to give it a try myself, 25 kilograms heavier then her, and even I could ride the kite in this light weather conditions. The low end is definitely better than last year but what more has been changed?

On the riding quality of the 2015 Dice we didn’t had much to complain. The low end of the Dice 2015 was already perfect and it seems that of the 2016 model it got even better. The kite has a slightly deeper profile with bigger wingtips then before. The valve is re-done completely, this is what you feel when you screw on the cap. The bag is missing the long sleeve for the inflated struts but that is not a real big problem with such a big inflate. The three struts are now thinner which makes the kite a bit faster and it improved its jumping capabilities. Also there is a new Anti-Snag design on the tips of the leading edge to ensure the lines and bridles won’t get tangled in an crash.

We were lucky to ride the Dice 2015 for 10 months so the third generation Dice already felt very familiar with a twin tip. Very playful and dynamic when we tried it in different conditions than the first time. It challenges you to do all the tricks you want to do, direct feedback with and an improved hangtime. The power development is a bit smoother than last year, linear and very predictable with a soft increase on the bar. The 2016 Dice has three different settings instead of two like last year. The recommended setting is medium – that’s how the kite is delivered and suitable for all conditions. But if you want to do some freestyle tricks it’s better to ride it on the Hard Setting as pop and stability are key here. The average freerider, uninterested in unhooked tricks but wanting a very comfortable and easy going kite, the soft setting is the right choice. 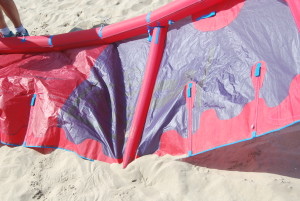 After a couple of days riding the Dice 2016, 9 meter, from as little of 17 knots till well over 25 knots, and with using the Dice 2015 version it wasn’t difficult judging it’s changes. It got better, not way better, but just better. It is a bit smoother and consistence in its power delivering, while being still quick and responsive. We had difficulty passing the 9m Dice on to the next tester, as we liked it all so much. Its improvements tot 2015 are most clear in its low end. It will get you going just a knot or 2 sooner than the 2015 version. Most features (like it’s on- off feeling or quick depowering, fast response, easy kite looping (with an circle a bit smaller than average) are not noticeably different changed from 2015.

The Dice is positioned by North next to the freestyle aimed Vegas. This might scare less experienced riders, which is a shame. The Dice really is a friendly kite if you tune it the right way. Kites which come close to the capabilities and feeling of the Dice are the Cabrinha FX (which is lighter on the bar), the Ozone Catalyst (with 25m lines a bit less responsive) and yes also the F-one Bandit 8th version (worse at low end but slightly more aggressive).

There are still some points of the Dice which are less perfect but not a direct reason not to choose for it. All though it has a superb low end, the Dice can suddenly give up and completely stall in really low winds. It is not at it’s best in gusty winds. Since it is quite a direct kite, it will let you know when it is gusty. This has improved somewhat from 2015, but it still belongs to its behaviour.

The silly 6 PSI advice is still there, which is kind of ridiculous as we had stated before (so pump the Dice, just as any other kite, rock solid if your not a beginner). The inflate is still, all though claimed to be improved, not as bomb proof as we have seen on many other brands (Ozone, Best etc). And last, but not least, the depower line will still wear out in a session or 30. We have seen some easy solutions, like a plastic cover and still come with an stopper ball which can move on the fly. Are these major issues? definitely not, we loved every minute using the Dice and we think 90% of the kiters out there will feel the same. 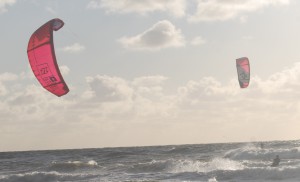