A huge low wind kite and still responsive? It sounds impossible but it looks like the Epic Infinity comes very close. We tested the fourth (V4) edition of the Epic Infinity. The V4 is brand new and there is little information (yet) on-line except for some video’s from the Epic owner Dimitri. The information on the third version on the Infinity reveals it should re-write history…again; exceptionally stable and has the power of a 19 meter but turns like a 14 meter kite.

Funny detail is on it’s size indication; the Epic Renegade Infinity V4 has just one size which is not stated. Why not? “Well it just sets people on the wrong thoughts and pre-assumptions” was the answer.

Normally we are not that keen on testing a kite made for a very specific goal. For a good test it requires multiple sessions with several of these types of kites. We only had the Epic Infinity to our availability so we are aware of the limitations of this review. Main aim of this test; can average kiters also have fun with such a huge low wind kite? The potential fun does come with a price though. The Infinity is priced at around 1600 euro’s (the V4 is about to be released and is not mentioned in the price list yet) it is probably a bit cheaper than many of it’s low wind competitors (like a Flysurfer Sonic 15m is a few hundred euro’s more expensive). Luckily the Epic Xtend bar can be used on almost all their kites including the Infinity. This means you save an extra 500 euro’s. 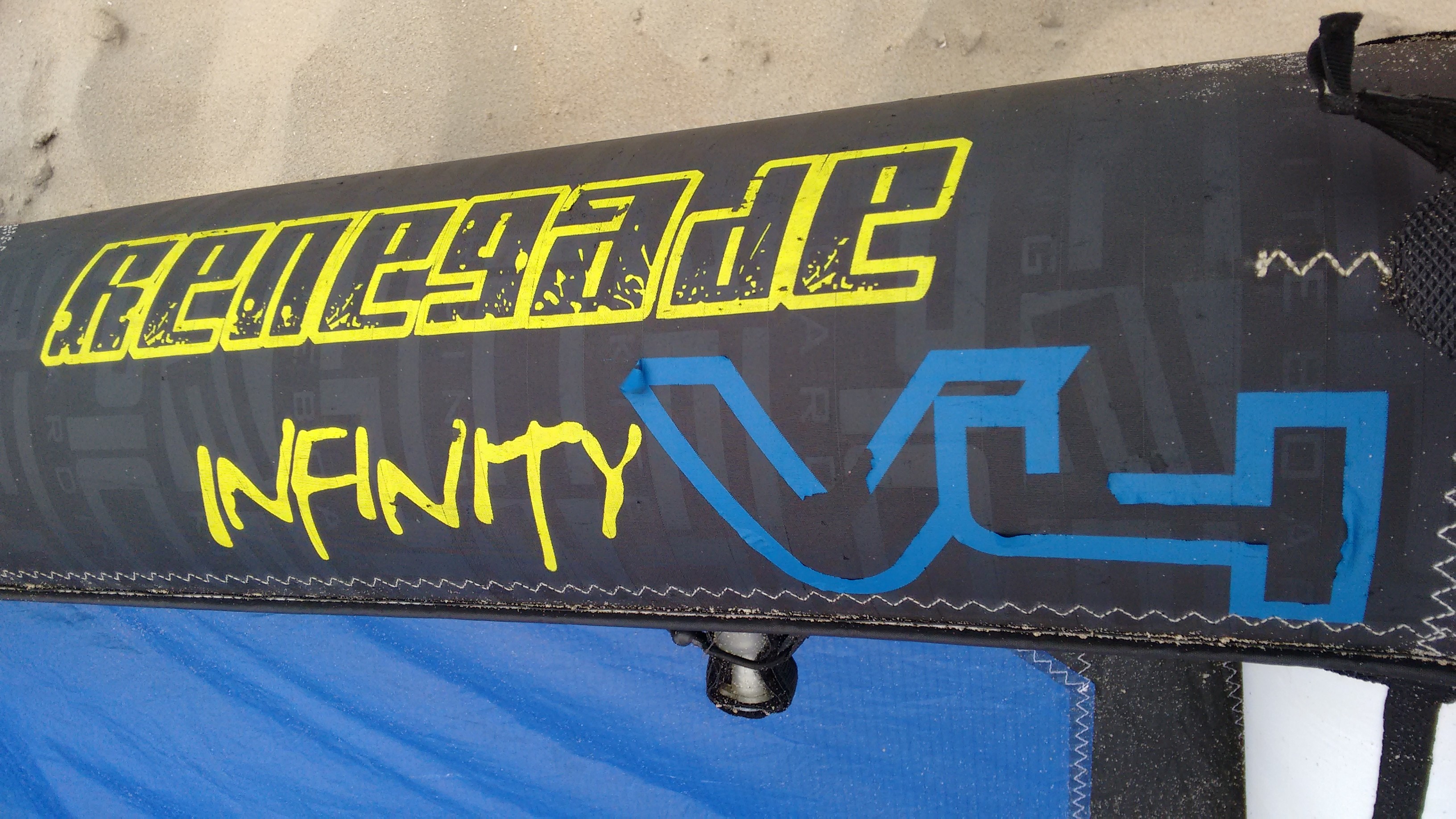 The kite has 3 struts, a nice big inflate (like Cabrinha and Ozone have and and where North can learn from), one-pump and huge bridles with pulleys. The pulleys have wheels in them, and this can cause damage to the rope on the long run as we know of several other brands. Preferably we would see these pulleys without any rotating parts (as the North Dice has), so the lines cannot get between the rotating part and the housing. There are no alternative settings for the steering lines available at the tip of the kite. We already tested the bar & lines in the Epic Screamer 5g 12m review so we won’t come back to this and focus on the kite. 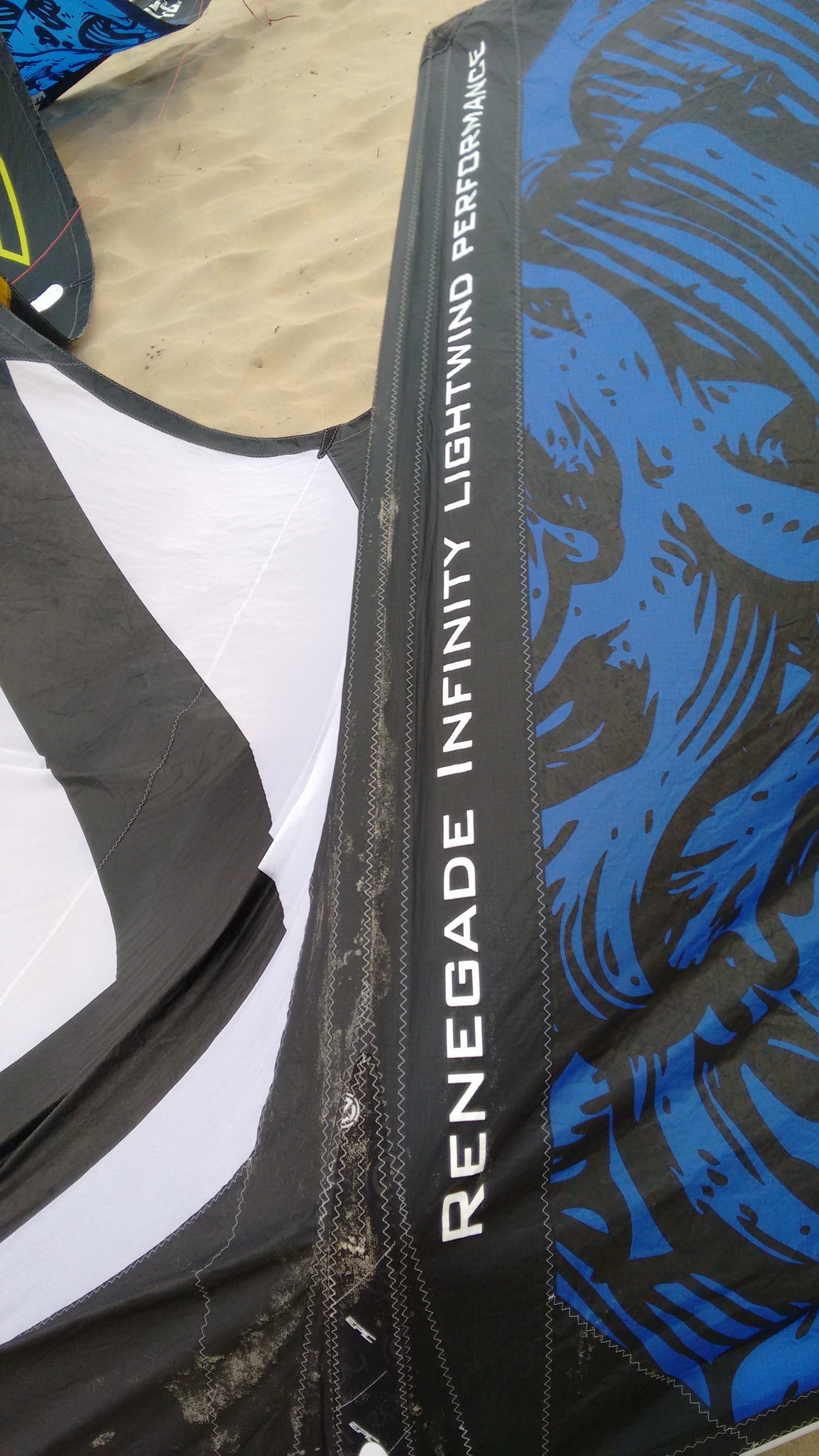 We tested the Infinity in several conditions; In semi-light conditions (steady 14 knots) up to the high end of this kite at (a steady) 20 knots with waves up to about 1 till 1.5 meter.  In the 20 knot wind we also used the Epic screamer 5g 12m and several other 11 and 12m kites (like the North Dice 11m and the F-one Bandit 7 12m). The 20 knot sessions with the Infinity was a short one. It was just pulling too much and we had to set the maximum depower, which made the kite still pull as a tractor. The Infinity had gotten too slow in this setting to actually set this pull to any fun, like jumping around. By the way, the 12m screamer was still good fun and there was totally no reason to skip the Screamer and use the Infinity, but we just wanted to see till how far the high end of the Infinity stretched. We reckon a reasonable high end of the Infinity is somewhere around 18 knots.

The 14 knots sessions worked out much better. Several testers took the Infinity out for a ride. Everybody was happy with the pull the kite has, which isn’t a real surprise being such a huge kite. This was best shown by the 100+kg rider who wasn’t happy on his 14m kite but was able to have a nice session with the Epic Infinity.

The pressure on the bar is far from light though. The pressure on the lines does help you feel where the kite is, but for people who are not that strong the bar bar pressure can be a bit to much. For a decent jump it means you will need to give the kite a more than average pull backwards. Be aware to take the kite with you during landings, which means a firm -more than average- powerful forward input at the bar. Timing is not that difficult, although finding it’s maximum pop takes some practice due to the standard relatively high bar pressure. If you can keep your edge and find it’s sweet spot and time the jump correctly the Infinity will get you air born nice and playful.

We also tried it with a wave board and saw that it was quite usable for it. The kite is, regarding it’s enormous pull, still quite responsive which is probably it’s unique selling point. So in the waves you can use it’s relative quick response to keep the kite with you at any turn. But we have to say it is more logic to use a bigger wave board with a smaller kite to shred some waves in light winds. The Infinity is also stable, even with hardly any pressure on the lines when riding a wave or landing too far down under the kite from a jump. Another benefit from this stability is that it will suffer -relatively- less from wind lulls. A typical phenomena a non-tubed low wind (foil) kite is known to suffer from during these conditions. Normally a foil kite will open up again, but every now and then the tips may end up in their own lines. Is this Infinity better as other (foil) kites in extreme low winds? It is hard to say without actually testing it but some reviews on the Epic Infinity previous version V3 suggest some foil kites have a better low end than the Infinity.

Reaction from Epic on the review:

Generally above 14 knots is ALOT. Its not something we recommend since normal screamers/renegades are better then. But the shape designer rides it until 22 knots and some german testers even higher but thats just crazy.
With my 110 kg, i ride it on a normal twin tip starting 10 knots. Adjusting the board really matters. When i’m on the Oxygen 135×47 i have alot extra lowend. But above 12 knots it pulls pretty hard.
The rostan pulleys are specially high quality pulleys, but yes they can get stuck.
But overall they have far less problems with the bridle rope then the low friction sliders we also had before.  Depending on the beach type people had alot more wear and tear on the bridle.