When we think of Epic kites we remember the slick video’s from owner Dimitri in which he shows how old school kiteboarding tricks should look like. He even had so much votes on King of the Air entry video, that a lot of people were surprised he wasn’t elected for the contest, including himself. So he made a reaction video, drinking goat milk…Goat milks gives you rockets.

We had the chance to test the latest version (5g means fifth generation) of a 12m Epic Screamer 5g. These 5g’s are just released and so new that they are not even mentioned on the Epic webpage yet. We did find a short introduction video on the 5g. As is described on the kite and what was written on the previous generation Screamer, the kite is all about classic big air / boosting machine and Speedy turns through the wingtip for the megaloop lovers. Those lovers do need to pay a price though; prices of the Screamer kite are comparable with the most expensive ones with 1800 euro’s for an Epic 12m Screamer 5g with bar.

The four line Screamer has five struts, big bridles with pulleys and a large (like Cabrinha and Ozone) inflate, protected with a soft patch, to the one pump system. The struts have a funny thickening at the end, in the shape of a hand grenade.

We used a fourth generation (2014) 4g xtend bar with the 5g Screamer. The 2015 5g bar wasn’t available yet. The lines of this bar look solid, and we like the fact you can turn around the depower lines tot untangle the front lines which is needed since there is no swiffel. The depower system with straps is not our favourite. It is hard to adjust it gradually, especially in light winds with too little power on the front lines. The depower lines run through quite a large gap in the bar. It has a big red stopper ball, but it is quite hard to adjusted it on the fly. The bar has little holes on top to have a bit more grip with your fingers. For unhooked kiting is a safe suicide mode possible by a ring around the chickenloop.

We tested the 12m Screamer in a steady 20 to 23 knots of wind on open sea with medium waves.  The first feeling you get is that the kite is very firm. When it goes, it goes and you will feel it. The second thing you notice is that it doesn’t feel big. The kite, even this 12m, doesn’t feel big and for example turns can be made surprisingly tight for this size. It is not the low end this kite is made for, but you can kite with the Screamer as soon as most 12m’s but it needs active riding to get it going. You feel from it’s firm feeling the kite is made to be ridden with power. 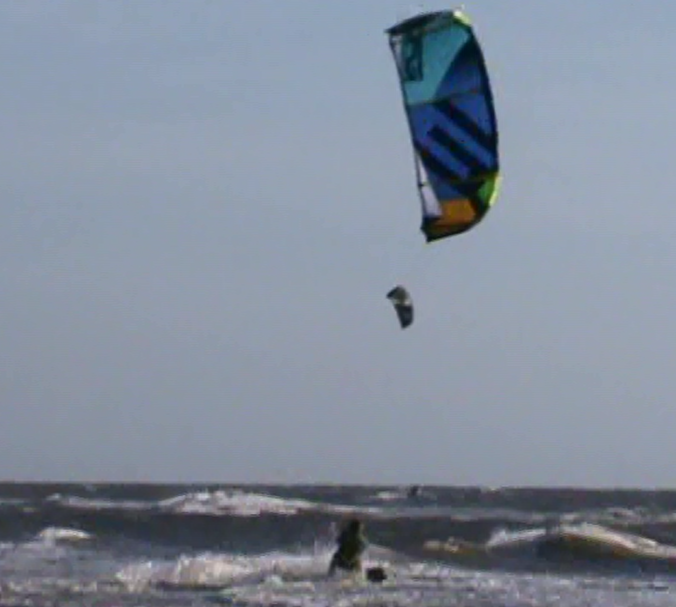 The pop is massive and short, but you need to aim and time your jump with precision, which makes the kite a bit for the more progressed rider. If ridden correctly, with quite an amount of dedicated force, you will be rewarded big time. The Screamer is actually very similar as the Best TS, all though the Best TS has less bar pressure. The same typical grungy, pulling kite as the TS. But don’t forget; these kites will need to be kicked alive. When you give it the right input, with more force than many other kites (like a North Vegas which all ready need some force to get it going), you can do a lot freestyle moves with it. Since it isn’t that lively/responsive it, it will stay nicely where it should be. The screamer is more predictable where the kite actually is than the Best TS. Landings can be really hard, it needs -again- a lot of input to catch you from coming down. The screamer is a very specific type of kite, which can beat Woo records, especially by strong, athletic men.

List Prices not yet known. (Prices estimated based on 4th generation prices):