The 2015 Ozone Catalyst is, according to their website, the top selling kite from Ozone: the true do it all kite because of its versatility. The Catalyst performs equally well in all aspects of the sport, satisfying a wide variety of riders and styles. We have heard that a lot of times before, but it is thé Ozone kite the average kiter would choose, so we had a go with it and tested it.

Ozone has six different tube kites. There is one wave kite, a trainer tube kite and a race kite. The riding style for the Catalyst is placed between the Edge (hang time kite) and the C-kite C4. The Catalyst 2015 has a common (for cross-over/do it all kites) set up with 3 struts, one pump (without exact pressure instructions) and options to set the steering lines at the tip at several positions for more or less bar pressure and quicker/slower response of the kite.

There are four gummy feeling “battens”,  at the trailing edge of the kite which we have not seen before. We have the impression these gummy battens are meant to reduce any shaking of the canopy. Funny little detail is that the size indicator figure eight is very largely written on the canopy. The way it is written can also be interpreted as an eleven…

There is little to find on the Ozone 2015 contact bar that isn’t taken care of. It has a nice grip, a good safety system, a fair power/depower system (with a magnetic cord that won’t bounce around when depowered), a tiwstable/turnable depower line and a unique Ozone swiffel at the very low split point of the front lines. The four lines are 25m (20m or even 15m is also opted), which up front gave us a bit a sceptical feeling about such long lines. The bridles (without pulleys) are wide; they reach all the way to the middle section near the wide in/deflate, like for example the Cabrinha Fx has, including the soft shelf to protect the canopy.

The only criticism we could think off where the unprotected hard edges on the end of the bar (possible damage to a wave board for example) and there is no (active) stopper ball system present. But those two issues are only there since we couldn’t find any others.

We used a 2015 8m Ozone Catalyst in both under and pretty powered conditions with gusty and rainy 22-28 knots of wind on open sea with small to medium waves. At the same time we used a F-one Bandit 7 and a North Dice 2015 7m. Up front we thought that the 25m lines (most lines of other brands are a few meters less) in combination with a low split point of the front lines would result in a boring/slow kite with no direct response and thus a no fun kite. We were wrong, very wrong. The kite was surprisingly direct and alive, we really liked that! The Catalyst is not a game changer on any of the single disciplines of kiteboarding, but it works close to perfect on everything you want from a kite (except race). It handles really easy, with medium bar pressure (we preferred for sure the outer setting on the tips for the steering lines which gives lighter bar pressure, which in this setting is like the F-one Bandit and a tiny bit heavier than the North Dice). Looping the kite needs much less input as a Vegas or Best TS and even a bit less than the Bandit. The pull from the loop is medium to soft. Finding the Catalysts ideal pop moment is not hard to find; Timing the Catalyst for a jump is quite easy and due to to the medium bar pressure you don’t need to look or focus on where the kite is. It will give a medium pop which will not break the Woo world record of jumping heights, but it will get you air born with a big smile. It neither will give you the air time like the Ozone Edge, but it is so much more fun to ride the Catalyst due to its lively feeling. The upwind performance was good (just as good as the Bandit and the Dice), the low-end was even a bit better than the Bandit (probably due the long lines) and even a tiny bit better than the Dice. Handling the wind lulls (which we really had a lot in the test) is best to deal with actively (moving the kite around); The Catalyst is not meant for racing and maybe related to this deals a bit less easy with wind lulls. Powering the kite due to a gust will be felt, in a positive way, but it some how releases the power so it is limited in its aggression(on the contrary with a c-shaped kite which will let you know the gust is there in a aggressive way). The trailing edge with the gummy battens, who do their stability work but, just as the Bandit, it does shake a bit in a heavy gust. 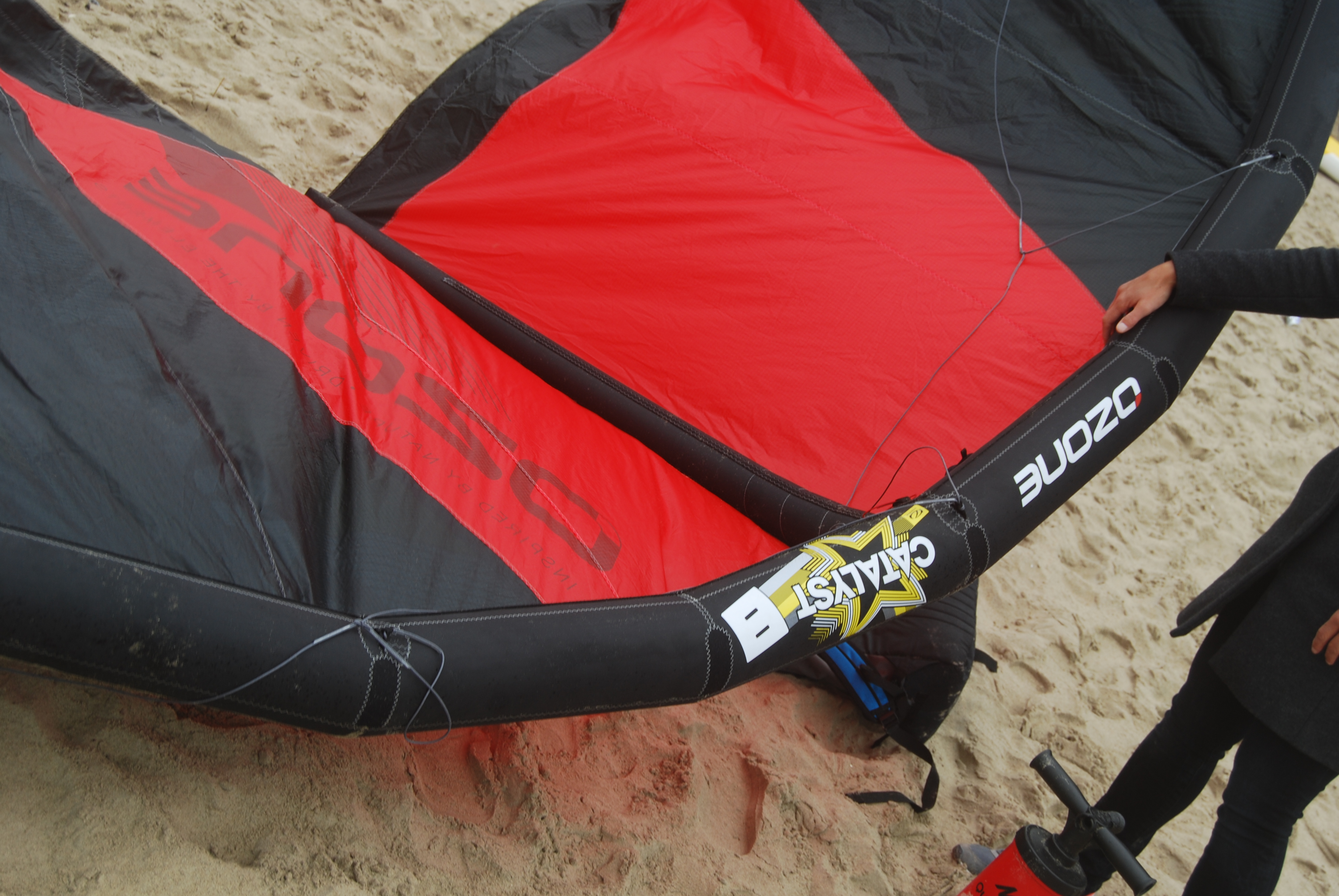 Most riders will not be limited with this kite and will benefit of it’s broad capabilities with close to perfect performance on most of the disciplines. Sometimes we test a kite and are finished with it within a couple of sessions, but with the Catalyst we just kept kiting the rest of the day with a very satisfied and happy feeling.