The South African brand Vanhunks sales skateboard, surfboards, SUP, kite surfboards and twin tips. They have  three different twin tip models which are made in two to three different versions and are (except for the Anemoi) available in a short and a long version and most of them come in different colour options. Apart from the colour options there are 17 (!) different twin tips available. Apart from the size, Vanhunks still have nine different twin tips to chose from. To make a good selection from those nine different boards is a bit overwhelming. Too bad the graphical explanation on the Vanhunks website it too difficult to really help you make a choice. The two boards are 599,- Euro each (including straps and pads), which is not really expensive.

We used two of the Vanhunks twin tips and checked if they are also in it’s element in another continent. We tried the Manakel Cross over white 137*41 (large) version and the Bucca Flex 135*41 (small). We tested the boards in open sea with 25-28 knots of wind with medium waves with different kites like the F-one Bandit 7, the North Dice 2015 and the Ocean Rodeo Razor 2015. We didn’t do any freestyle moves, but we could test them for old school big air’s, upwind capabilities, comfort, speed and handling of chop.

The Manakel is described by Vanhunks as the freestyle power-house. The “cross over” means middle sister between the comfort of the Manakel Flex and the high-performance pop (same price) of the Manakel Full Carbon (+100 Euro’s). The term freestyle or new-school can get you set on the wrong track, as we have seen with the F-one Acid. Al though labelled as a new-school twin tip, it works brilliant for old school moves. Mainly because of the outstanding pop and the comfort.

The core of the Manakel Cross over is made of (Paulowina) wood, just like many other boards like the F-one, Axis, JN and Cabrinha 2015 twin tips. In fact the material of this board isn’t it speciality; It is reinforced with carbon and has ABS rails, which again is found in many other twin tips. There is however the promise that it has outstanding flex with  stiffer tip and tail.

The looks of the Manakel is nice (except for the size indication, which looks like it was forgotten after the production and some one just added quickly the size with a black marker), but is again not the reason you would choose for a Vanhunks twin tip.

So how does the board feel like on the water? Let’s start with the two most outstanding aspects of the Manakel; The jumps with it’s incredible pop is amazing. It is super easy to get this board to enormous heights. The second aspect that is noticed is it’s speed. It is probably related to it’s (relative high) flexibility that makes the board a bit slower than other (stiffer) boards. The board does feel to be on a steady track, a bit more than a real new-school freestyle board. The steady track helps it carve really nicely through chop en it also gives the feeling you can keep its edge fully powered, even for 75kg riders on this large 137cm edition. You can really feel the torsion flex is very well balanced and is very comfortable. As far as we have tested we think this Manakel is comparable with the North Team Series and with the F-one Acid, all though it is slightly more flexible.

The Bucca is described as a wake-style performance board. Small details, like the channelled tips and its extreme flexibility. The construction, apart from the top layer, seems to be the same as the Manakel Cross over. So any differences should be in it’s shape. The main focus in it’s design seems to be comfort; The board’s unique glass layup and wood core ensure excellent shock-absorption and smooth and comfortable ride in choppy conditions.

Indeed the board is extremely comfortable. It bends and flexes with every move (landing from a jump and bounce from chop) which results in a nice soft feeling. The board’s pop is (even) slightly better than the Manakel. TheBucca flex feels quite looser on the water. All thoug Vanhunk claims more control, the Bucaa seems to be a bit over the top for most average riders. It does have ultra amount of comfort, but it is even slower than the Manakel. It jumps (probably) a bit better (easier) than the Manakel, but in our circumstance (open sea with waves) we really missed its speed to get air born. Going upwind is probably it’s second downside. It loses energy in it’s flex and due to this it’s upwind performance is a bit less than other boards (but probably the same as for other wakestyle boards). Surprisingly the small version suited our 95kg rider just fine (in our conditions with 25+ knot wind). We guess this would change if we would have used boots (which is kind of logical for a wakestyle board) and in that case the larger version of 140 * 42cm is to be used.

The pads (with the Facebook thumbs up look alike)  shaped black (softer) part are looking a bit old fashion and won’t win any graphical prices but they do their job. In fact, in combination with the straps they are surprisingly comfortable and probably are better than about 80% of all other systems (like F-one’s straps). You do need to prefer (quite) wide straps though. The straps have about 5 different angel positions and a classical 3 width options.  The 4.5 cm fins are made of -strong- G10 epoxy, supported with plastic covers and are pretty standard and do their job. Surprisingly the wake-style Bocca isn’t provided with wake-style fins. 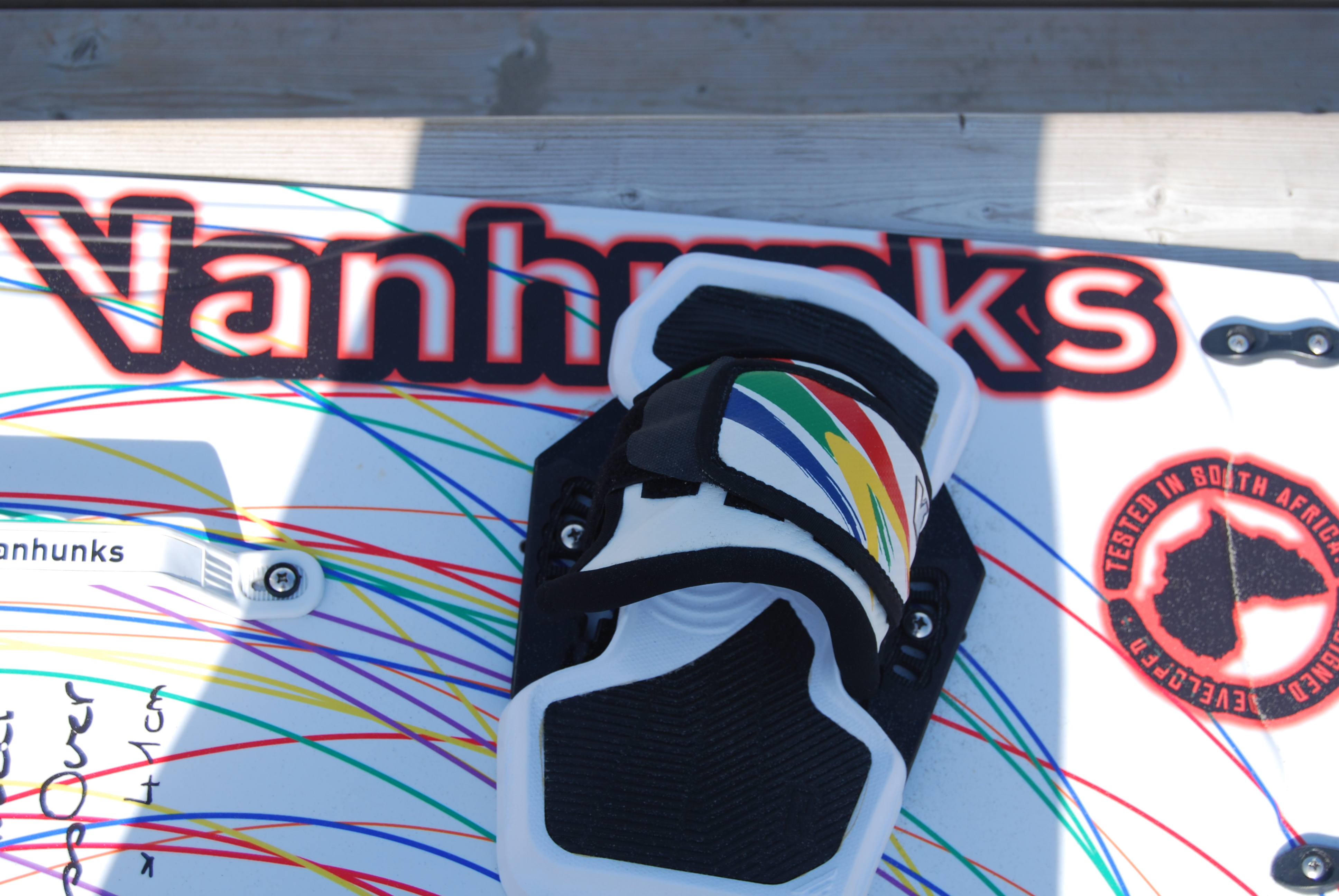 Reaction from www.vanhunkseurope.com on the review (translated from Dutch):

We like the review. We only can say that we have had other riders who state the speed issue is less. Since the Bucca was the one with the most flex, we think the other two versions will be different. We are willing to test more boards with We Test Kites.