Today is gonna be a good day. One of the many cheering lines of the JN Kites Twintip Chit Chat reloaded. It has over 20 randomly chosen sentences written down, both on the top and the bottom of the board, which makes the looks of this board unique and cheerful. The Chit Chat is described as a an unrivalled freestyler in terms of pop, speed and landings.  We tested the Chit Chat reloaded 134 in several conditions; with 20 till 28 knots in choppy till rough (2.5 m waves) sea. Not the perfect conditions for a test of a freestyle board, but we tested the Chit Chat 134 * 40 cm to see if it is also in it’s element out of pure freestyle conditions. This should work out not too bad, since the aim is to bring you to the next level in freestyle and freeride. The 134 is the second out of the four possible sizes. We reckon this board is suited for kiters till 70 kg. A more heavy (or bigger than roughly 175cm) person will notice the 134 board gives some spray in the face and needs to get a bigger sizes board (138 or even 142). The board has a honeycomb core combined with a layer of carbon and is about 150 euro’s more than the Peacemaker. Both boards weigh, with dry straps, around five kg. The weight feeling while kiting feels medium till light; a bit lighter than most other boards, but not as light as for example the ultra-light North Select twintip.

The site of JN claims an optimised concave. It is a single concave, without any channels. The board is supposed to have flexible tips, and yes the board indeed feels quite flexible with a nice pop and smooth comfortable landings, but it is not as flexible as -for example- a F-one Acid, but it is a bit more flexible than a North Jaime or the F-one Trax. So jumping is easy and doesn’t take too much effort. One aspect from the board clearly stands out; it feels quite loose on the water. This is good for tricks and playing around. Because of the loose feeling we would recommend outside of flat water to get the 4.5 cm fins and not the 3.0 wake-style fins. This way the Chit Chat will feel a bit more as to be on a straight trail. With this set-up the upwind performance is also improved really a lot. The Chit Chat is quite an accessible board which gets going quickly and is easy to use. 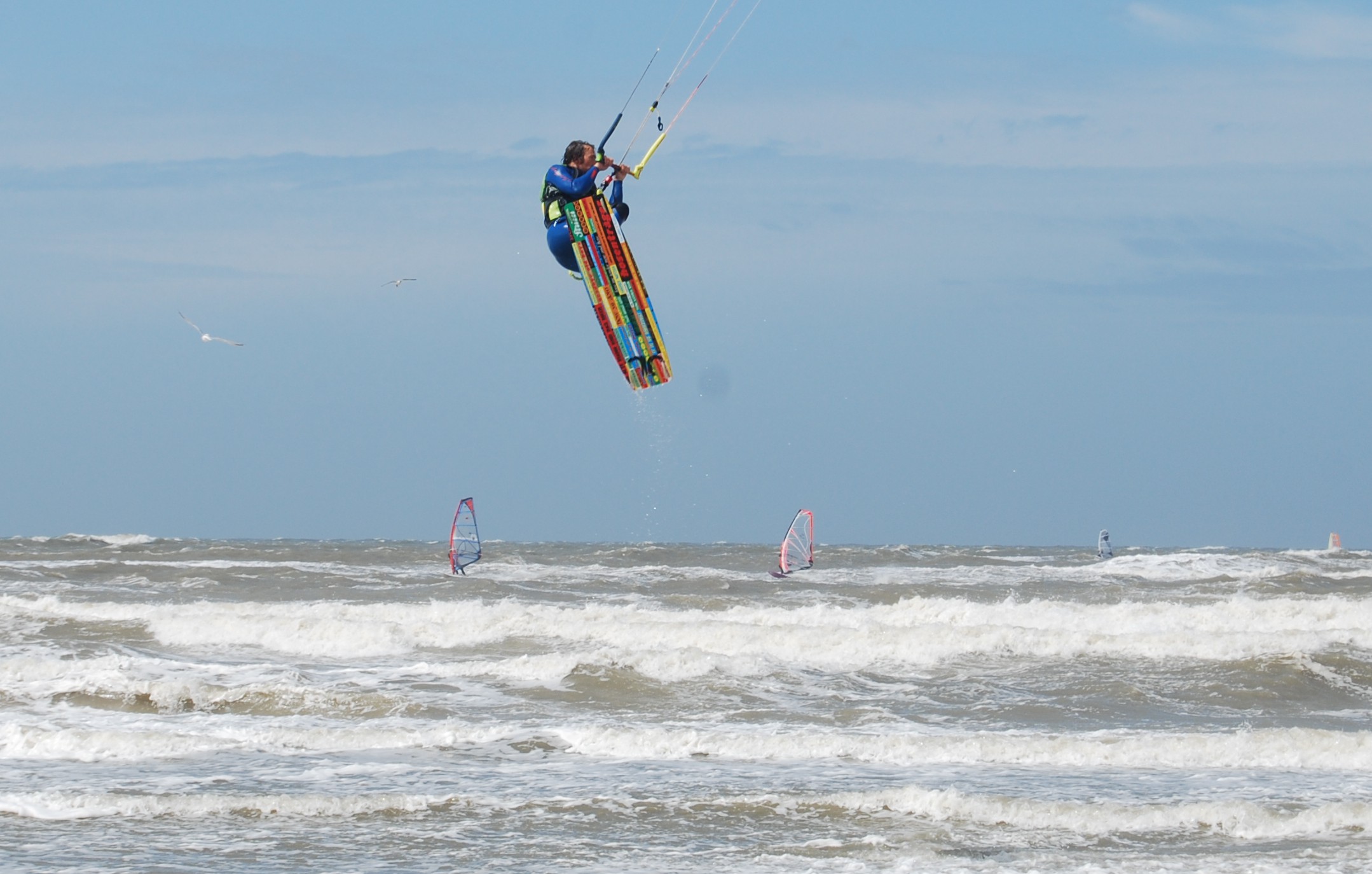 The Peacemaker looks less flashy than the Chit Chat but still looks nice with its huge peace sign at the bottom in combination with its Mondriaan look-a-like colors. The 136cm is the mid size of the 5 different size models of the Peacemakers. The board is described as a board that should suit wakestyle and freestyle to make intermediate tricks, through to technical handlepasses a breeze. This all sounds like quite radical. The board -luckily for the average rider- hasn’t got that radical edge to it. For example the board hasn’t got any channels or any huge concave. The board  feels a little bit stiffer than the Chit Char but this is not a big difference. It may be due to the difference in the core of the two boards. The Peacemaker core is made from a special, lighter than normal, Paulownia wood.

The same as with the Chit Chat riders above roughly 75kg need a version (or 2) bigger than the 136. Otherwise you will get some spray in the face. The board feels a bit smaller than the figures would suggest. It is also recommendable to feel the differences with the several options on the width and distance to the rail of the pads and the straps. We found the average (2nd or 3rd insert) settings a bit to narrow for the average (1.80cm) riders.  As the Chit Chat the Peacemaker is also a surprisingly accessible board which doesn’t necessarily demands an expert rider. It has a fair upwind (with the 4,5 fins) capabilities and easily gets going. 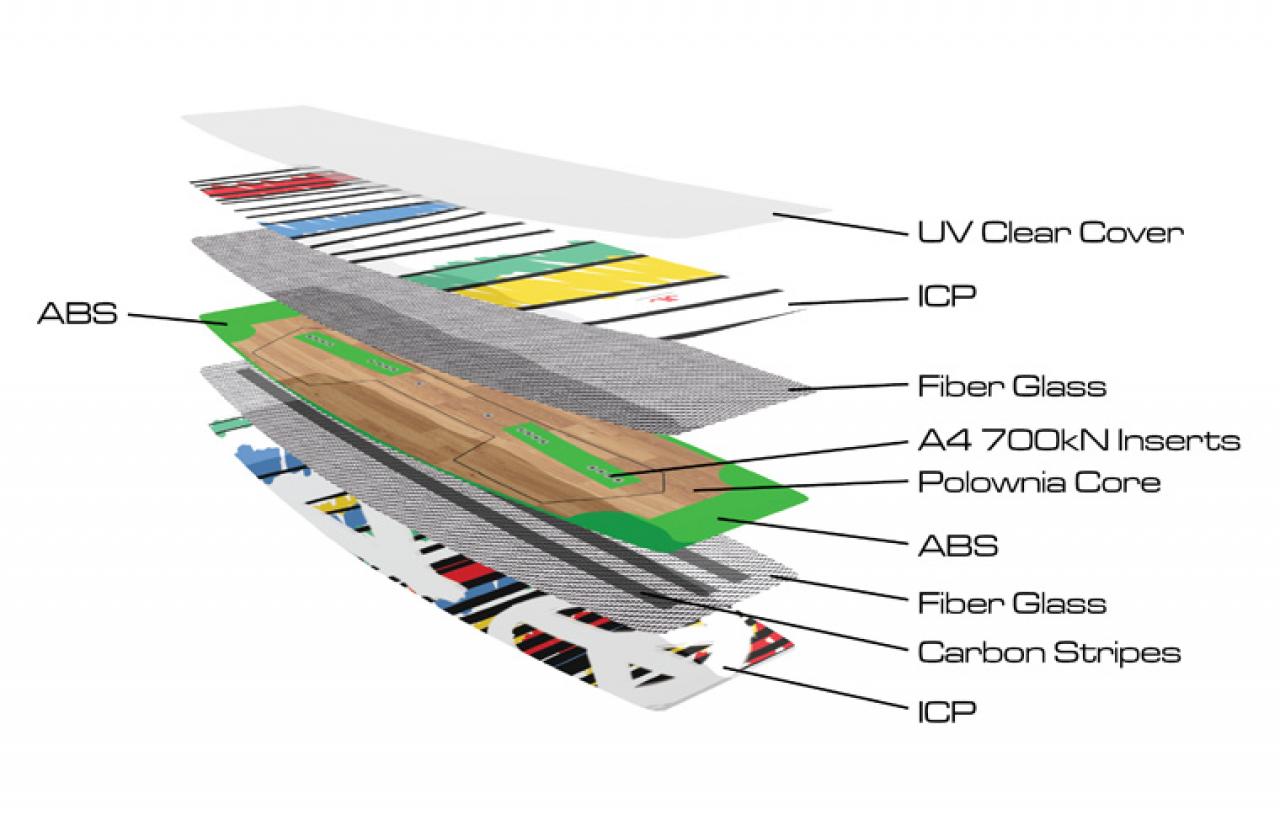 The pads and straps are similar for both boards and are of good quality. Most riders liked the comfort of the JN pads & Straps. No sharp or hard edges which can hurt your feet.

It has four instead of the usual three inserts for the pads. The straps can be moved forward and backwards at three settings. So the options to place the pads and straps are for both board a bit more than a classic board, but there are also twintips from other brands with more (almost unlimited) settings (like the track system of North or the Naish Apex system).

The fins are from a reasonable quality and for example much better than the -for example- Playmobile fins of F-one. The connection of the fin to the board is supported with a neat plastic cover. Just a little extra that helps against loosing the fins. JN provide two sizes; wakestyle 3.0 cm fins and the 4.5 traditional shaped fins. Both boards get a (even more) loose feeling with the wakestyle fins. So those wake-style fins are more recommendable for flat water. For any other circumstances we would advice to take the 4.5cm fins.