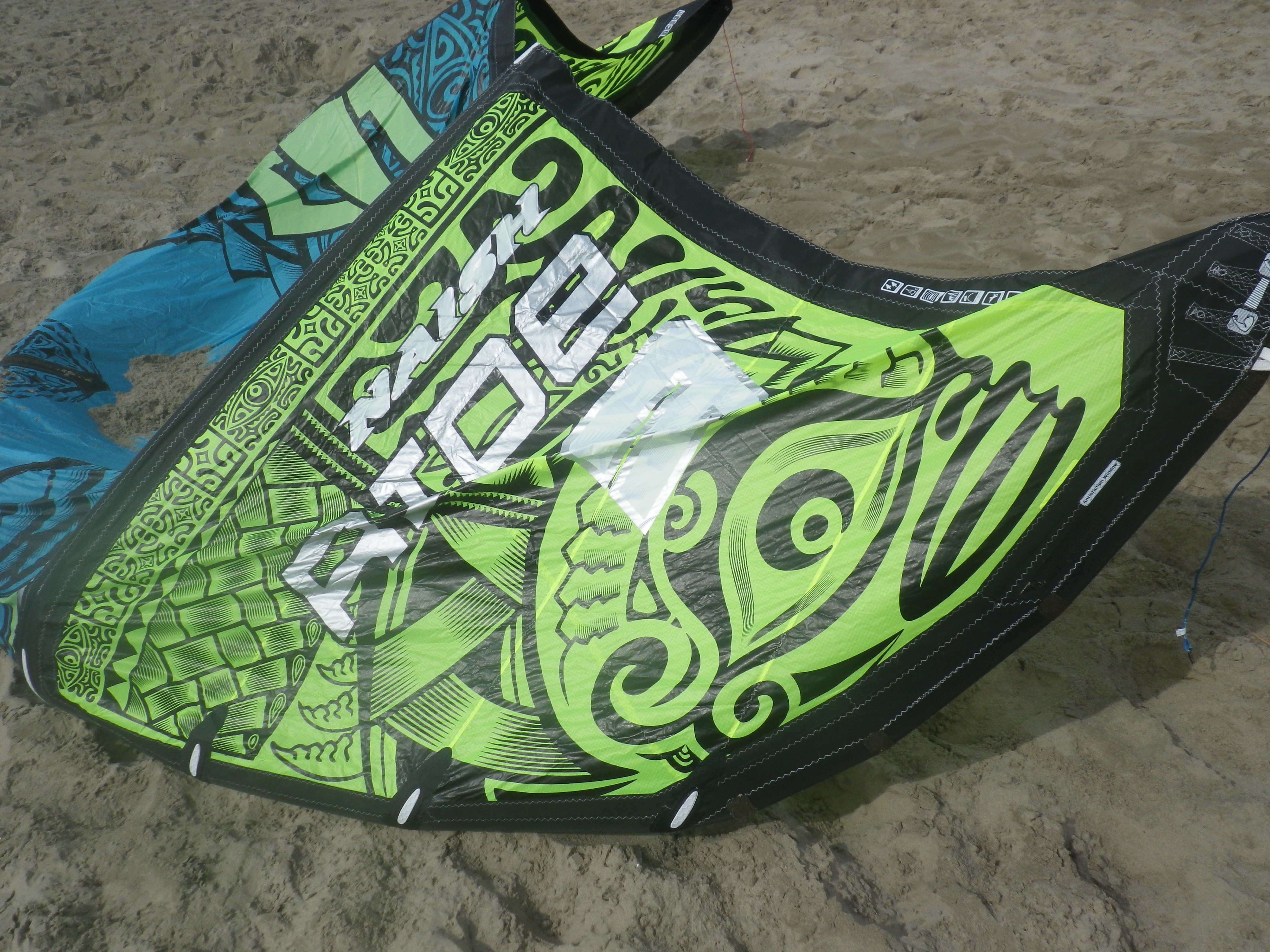 The Naish Ride is on the market for a couple of years now. In the slick product video the “All-Around Freeride” Ride is mostly ridden by good looking girls and young kids (with a voice over from a guy who probably is trained to talk people in to sleep). This video and the many details on the website of Naish suggest that the Ride is intended for users who demand a reliable, steady, easy to use and not too powerful kite.

Struts and one-pump system
The Ride has a spectacular amount of struts due to its missing middle strut. The kite has only two struts. Quite interesting since most kites either have three or five struts. A few (tiny) battens on the leading edge are used to make sure the correct profile is kept in place. There are no battens at the trailing edge of the canopy.

The manual of the Naish 2015 kites states very precisely -and realistic- the pressure amount (in PSI) you should provide to the kite. Much closer to what you would do automatically than the unrealistic maximum of 6 PSI Duotone recommends for their kites.

The Naish has a very curious semi-one-pump system; Inflating is done by a traditional small inlet and it does fill the struts up in the same time. Deflating though is not done at once; there are deflate tubes on the 2 struts. This is due to a one way valve connection to the struts.

The Ride should be used with the 4-line Base Control System bar. The bar even has it’s own product video, but it doesn’t reveal much information. For example It is quite difficult to find the line length that’s preferable for the Naish Ride. Online websites automatically include a 24m line length bar, but a 20m version is also available. The bar power/de-power system is below the bar (same as for example Slingshot). We wonder if any kid or woman is able to actually use it. Even an experienced kiter will have troubles adjusting the power with this system. Another questionable factor of the bar is the safety. There is no swiffel at the front lines. Which means that, for example, with every back roll you make, you will get closer to a non-functional safety system. The front lines will get crossed a few times and won’t untangle if you use the release system. Is the absence of the swiffel the cause? Maybe not. Some people say none of the current swiffel systems will keep your front lines untangled. There is a solution: a manual twist-able depower cord. Some brands have it on their bars (like North). You can manually (yes even when attached to the kite) set the front lines untangled by just turning the de-power line by hand. If you think about it, Naish should be ashamed to come up with this bar, especially if it is intended to be used by kids like the video suggests.

We tested the 9m Ride in a steady 23 knots with choppy to small waves on a twintip. The effect of the missing middle strut wasn’t noticeable. On the contrary, don’t expect a kite that is light and alive, but more a steady and firm kite. Apparently either the small battens do a great job keeping the kite nicely tuned and tight, or somehow the kite is just cut perfectly to maintain it’s shape. The low end (performance at lighter winds) is it major selling point. 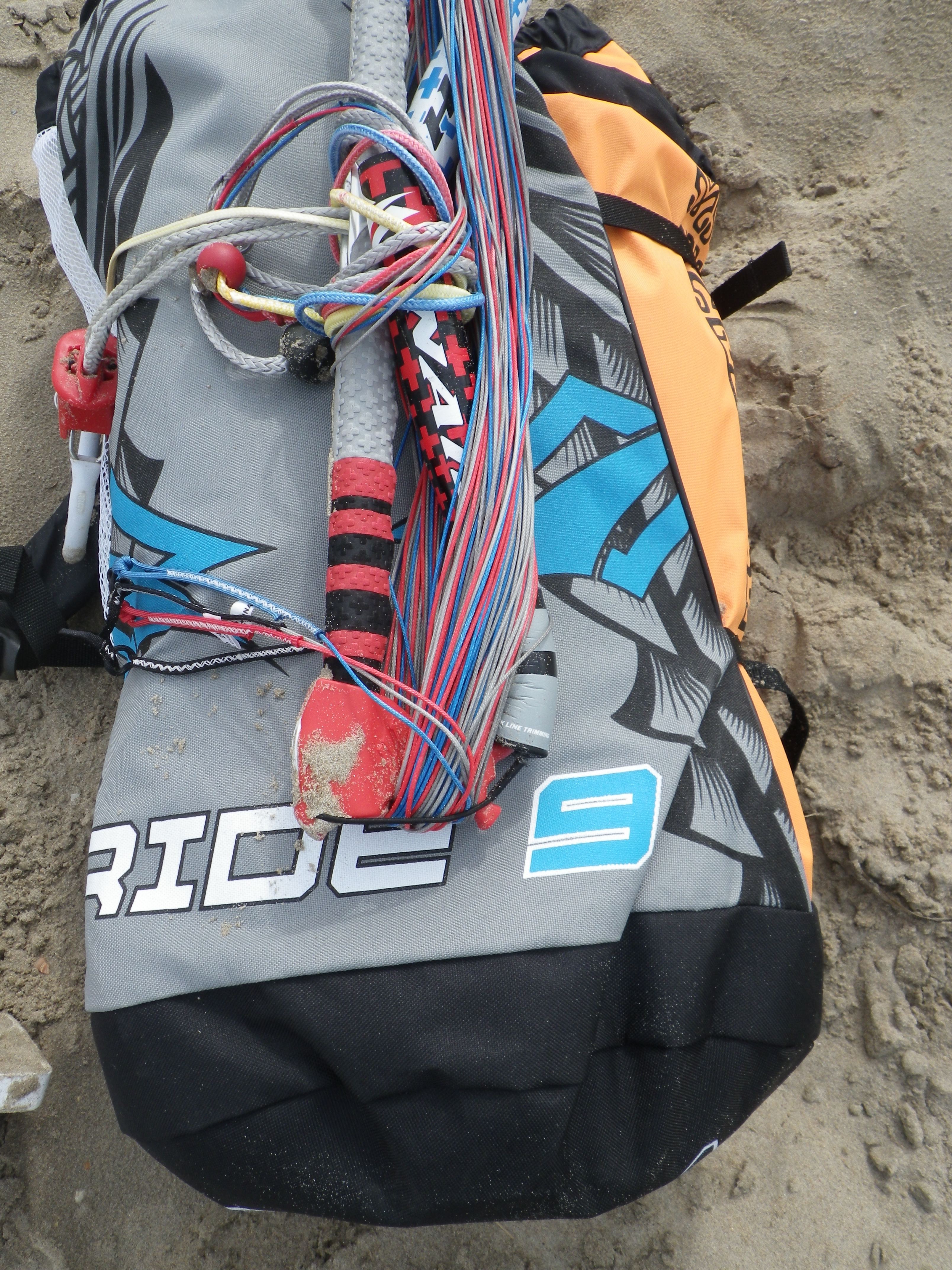 It gets going going much earlier than other 9 meter kites. The power on the bar is quite heavy. Considering it is (also) intended for the less powerful among us, this is a bit of a surprise. Pulling the bar for a jump gives a steadily and long, but a bit vague, power feeling. Resulting in long (good airtime) but less high jumps compared to kites that have a shorter but more powerful pull, like a F-one Bandit. Good for learning your first back- and front-rolls. This kite is not intended for looping and that is also close to impossible with the Ride. The kite has a huge turning circle, probably due to the low split point of the front lines. It will give you a (way too) long and powerful pull when rotating the kite.