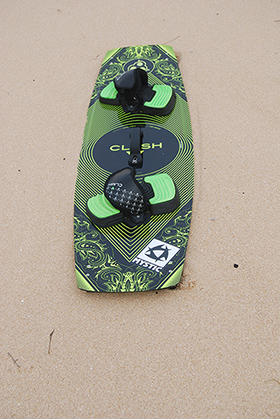 “Clash”, a relative unknown brand which just makes kiteboard twintips according to the knowledge of the Spanish professional Alvaro Onievo.

Although they also are sold with boots (complete for just 750,-!) we tried it with normal straps. We took it out to Canos De Mecca on a very gusty but windy (25-40 knots) day with from time to time some big rolling “ola’s”. 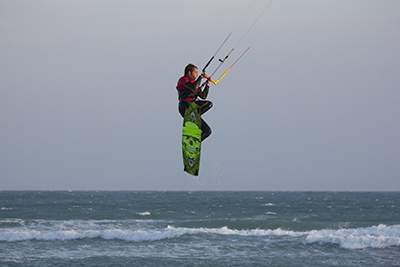 Size
The Clash was compared with a F-one Acid HRD glass fiber 132 by 40, both being in the same price range around 500,-. Although the length of the Clash is bigger on paper it felt remarkably small. Which also means people with 85+ kg’s where finding it too small. A very nice aspect of it size Probably the length of 138 cm (in combination with sharp fins) makes the board go upwind much better as the F-one board.

The focus of both boards is “freestyle”. Which translates in a nice big rocker in combination with flex to give maximum pop for a jump and some softer landings. The clash clearly makes a point in the rocker area, it jumped a bit better, but it feels a bit stiffer compared to the F-one board. The incredible (personally I like it, but I can imagine some people will find it too soft) soft straps feel a bit “weird”, but in combination with the ribbed pads it does make the landings quite okay. Compared to the standard -slippery- pads of F-one it is quite a relief, but there are better ones out there.

A bit of hassle with the Clash is its tendency with choppy waters to occasionally get a strange grip with the  front fins of the board, which is probably something a rider needs to gets used to. Besides this the board needs little getting used to and is ready to rock solid with many riders out there.

Riding the Clash 138 was a nice surprise. A 75-ish kg rider who wants to have fun and go big on a special board will love it. It will probably get your ability’s to new levels, especially if you compare it with other boards in this price range. It might be a bit harder to sell this board as second hand, since it is a rather unknown brand in countries outside Spain. We certainly recommend it for people that are looking from something different from a standard brand, it will deliver a lot of fun.