The F-one twintip kiteboards stand clearly out from any other brands by its shape and size of the rail; it is really thick in some outer parts of the rail, but narrow in the middle. To our knowledge no other brand has incorporated this type of rail in their twintip boards. F-one used this so called Helical Rail Design (HRD) also last year (2014) on the twintips. We also tested these boards (see link, in Dutch) and we were very exited on how it works; A lot of edge when you need it (to pop for a jump), and sharp as a knife when you need to cut through choppy waters. 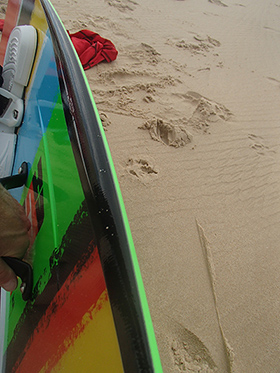 Maybe something that comes close to this technique is a invention called “Rocker Flex Adjuster“. This adjuster, mounted on the place of your handle,  will try to versatile the twintip. That is where  we see the similarity. But it gets different if we talk money; the RFA will take yo another 200 euros out of your pocket, as the HRD rail will just be there with the board without extra costs…

F-one mentions a change from 2014 to 2015 mostly on details like “reinforcements” to be able to stand the force of boots. Off course also the colors are different, but no major changes further than that to 2014. Just like the North Team Series twintip, the F-one is branded by F-one as a “freestyle” board. This is not really as we would describe it. Not because we think it doesn’t work as a freestyle board, it just has so more capabilities. All our test riders (like 90% of the kiters out there) are really far away to be described as a “freestyler”. Except for the occasional f-16 nobody does anything close to a freestyle move. But still we all loved the livey, playfullness feeling the board provides. Probably the massive rocker and flex is a real nice feeling in riding, in chop, big waves, flat water of any other circumstances. There is no situation the board is not perfect at. Maybe it won’t ride as thé fastest board out there or tacks not as upwind as for example the F-one Trax board does, but it does pop fantastic and lands really soft like so you just want more bumb&jumps. The main reaction we had the minute we rode the boards was a felling the board

How does the board feel on the water? Awesome! For real we haven’t had a board which came close to the comfort (flex!) which these boards provide. Are there any negative points? Yes there are; the pads! They feel too slippery. Also with small or narrow feet the bindings can hurt your toes on hard landings, since they get stuck between the hard plastic and the pads. Good thing in 2015 90% of all brands, and thus also F-one, will sell there boards now without any straps, bindings or fins. So you can choose your own pads and straps that fit your feet.

All though the  glass fiber version is really nice it is worth the extra money (around a 100 euro’s) to buy the carbon version. Its reflexes and responses are noticeably better.

The test riders, varying from 50 to 100 kg’s, above 85 clearly chose for the 133. On paper it looks like a small difference (2 cm wider and 1 cm longer) but it does make a huge difference in practice. Some 75/80 kg’s persons with strong legs might also like the bigger version, but in general riders up to 80 kg will go for the smaller version.

Be careful comparing prices, most new boards will look cheap this year, but they will be incomplete….Maybe in this case a good thing, because we prefer other pads/bindings attached, even the really old ones as you might have noticed on the picture.