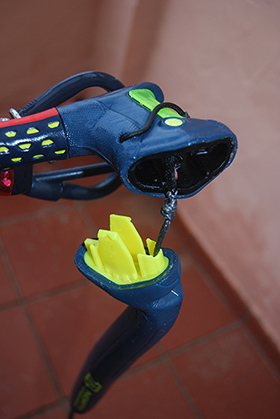 Both Bandit and Dice have a 4 line set up. The Dice kite comes with a 5th line (hidden in a pocket on the middle strut) for the kite, which means a 5 line bar could be used on the Dice. The North bar is available in one size only and costs (either 4 or 5 lines) 439,- and you could choose between 4 lengths;19m, 22m, 24m and 27m. For a dice 2015 22m or 24m is recommended. In this test we used 22m lines. According to North a 5th line is added to a better safety, but further is has n’t got any extra functions.

The differences between the North and F-one bars are mainly to be found in the details;

The North bar comes with a lot of features; The bar can be adjusted to small and large setting. It is done within 2 seconds by clicking a button on the bar. It does feel a bit like Playmobile, which probably will not last as long as the rest of the bar. The bar comes with a stopper “ball” which can be adjusted “on-the-fly”, which some of us really like (for example the bar will just go up as much as you want when spinning it back). Another great feature is the possibility to adjust the distance to the (de)power clamcleat. Especially shorter (woman) love this feature.

A negative aspect of the North bar would be the unprotected power line; It will damage much quicker around the location it enters the bar. A solution, in combination with a stopper ball and and adjustable clamcleat would be quite difficult, maybe close to impossible?

The F-one bar, which costs 449,-euro, is simple but effective. It does have a (plastic) protection on the power line, but as most users know it will damage in the upper area where the metal ring is scraping and thus damaging the rope. A solution (as the North bar has) with a pulley would be a very logic step.

The F-one Bandit 8 bag comes with a nice little bar-bag, since the bar pocket on the black-orange bag (strangely) has been left out. The North Dice bag (red) does have a bar bag and the possibility to be extended to fit an LE-only deflated kite. No difference we worry about by the way, specialty since we don’t understand why anyone with a North Dice would keep his struts full with air: The North “lazy” pump system will get a complete kite at least twice as fast as a old fashion inflating system at 6 psi.