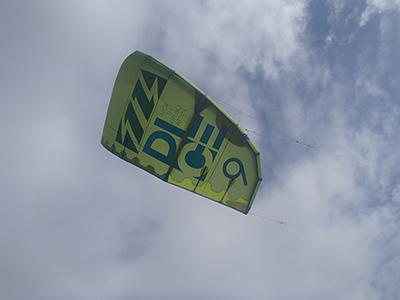 So lets compare the bridle’s;

our assumption is that the way the bridles are set up is quite important to the feel you get from the kite. Let’s say maybe for 40% (and 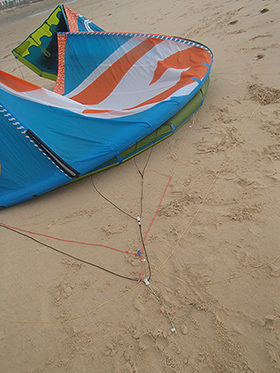 determine the feeling maybe just as much as the shape of the kite)? If we place both kites on to each other, as we did on the picture on the right with 9m’s, it doesnt appear to be so different from the Bandit to the Dice. They both have 4 to 5 connections on the leading edge. But the bandit has 2 pulleys, and the Dice just one on each side.

If we look closer to the pulleys, the North Dice (in blue) pulley doesnt have any moving parts. The pulleys of the bandit does have rolling parts (as the Bandit has had from the beginning).

Is this better? No! From my expierence a bridle line will -in time- be litterly scraped by those wheels, ending up broken, lets say in average use in about 2 tot 3 years. No need to say this means you won’t be able to control the kite any more if it brakes. So a small advice will be to check the bridle lines every now and then and make sure the wheel of the F-one Bandit pulley’s are not clocked with sand or by any other reason….And a small advice to F-one (as this scraping issue must be known by now?!); why not use a pulley without any moving parts….like the North Dice has.